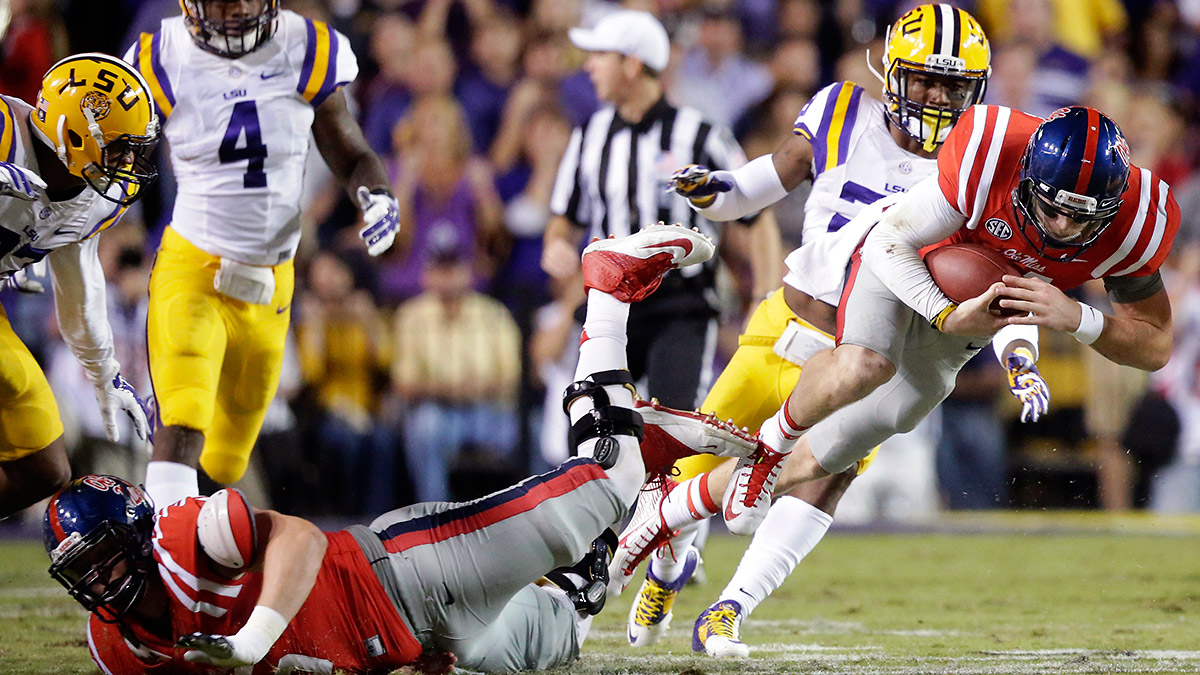 When nearly a third of a QB’s 22 completions go for touchdowns, it’s safe to say he had a very productive day. That was the case this Saturday for Boykin, who passed for 433 yards and seven touchdowns in TCU’s 82-27 shellacking of Texas Tech … in just three quarters of play.

Most impressive, Boykin’s performance seemed routine, which makes sense considering he’s the quarterback of the highest-scoring team in the FBS. After an offseason in which his job status was legitimately up in the air — he narrowly beat out Texas A&M transfer Matt Joeckel over the summer — he’s rapidly become a first-rate passer, and his value to the 6-1 Horned Frogs can no longer be questioned.

That said, it’s still fair to wonder whether Boykin is a genuine Heisman candidate — not because he doesn’t deserve to be one, but because he had very little in the way of preseason hype and thus remains a relative unknown compared with the likes of Marcus Mariota and Dak Prescott. Worse yet, he attends TCU, which couldn’t even propel motherfucking LaDainian Tomlinson to a top-three finish in 2000. As such, just getting an invite to New York would be a huge victory for Boykin.

It was bound to end this way: with a head-scratching, backbreaking, Bad Bo–thrown interception.

That it has ended doesn’t nullify the unadulterated joy Wallace’s campaign brought us, nor does it mean we wasted our time proselytizing on its behalf. No, it just means it’s time to focus our efforts elsewhere, such as convincing the New York Jets to select Wallace in the first round of next year’s draft. 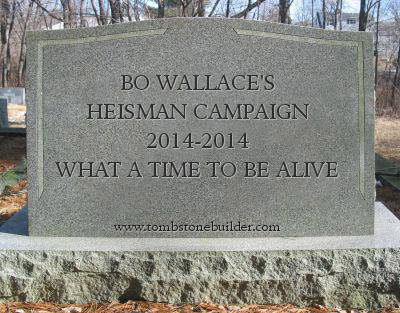 Maybe Barrett just thrives in every setting except the prime-time game on ABC? Eliminate his Saturday night debacles against Virginia Tech and Penn State, and he’d be a paragon of consistency, efficiency, and QBR. Factor them in, however, and he’s a typical redshirt freshman: streaky, turnover-prone, and ultimately reliant on his teammates.

Unfortunately for him, Ohio State’s next two games happen to occupy that 8 p.m. ET time slot,1 so he might need to become nocturnal. In the meantime, we can’t take Barrett’s Heisman campaign seriously, and we can officially return to snickering at the idea of him supplanting Braxton Miller in 2015.

It wasn’t nice of Lane Kiffin to unleash Cooper on the good people of Knoxville, especially after all the Kiffin-inflicted pain they’ve experienced over the past five years. In the game, Cooper accumulated a season-high 224 yards while adding two touchdowns, reenergizing his Heisman odds. Up next for the Tide following a bye: resurgent LSU, whose secondary held Ole Miss all-world wideout Laquon Treadwell to four receptions on Saturday. Cooper must at least double that number to remain in the thick of the race.

For our purposes, it’d be superconvenient if it were possible to meld Ameer Abdullah, Melvin Gordon, Tevin Coleman, and Todd Gurley into one dude, but alas, we don’t yet have the technology to make that happen. We can, however, force them to share a section in this week’s Heisman Watch.

Having just enjoyed his best game of the season (a 19-carry, 225-rushing-yard, three-touchdown romp over lowly Rutgers), Nebraska’s Abdullah is currently the country’s top red-and-white-wearing rusher. I say “currently” because these rankings tend to change on a weekly basis; it should be noted that Wisconsin’s Gordon has the luxury of facing Rutgers in Week 10 and may very well vault into the lead. Meanwhile, Indiana’s Coleman is toiling away in obscurity without any real chance at the Heisman, but he could easily end up playing spoiler to his B1G counterparts. And Georgia’s Gurley is just praying for the opportunity to play against Florida this weekend in Jacksonville, where he’d surely end the Will Muschamp era in style. Of course, Bulldogs freshman Nick Chubb would have no problem doing that, either. Let’s all take a moment to marvel at how jacked he is. 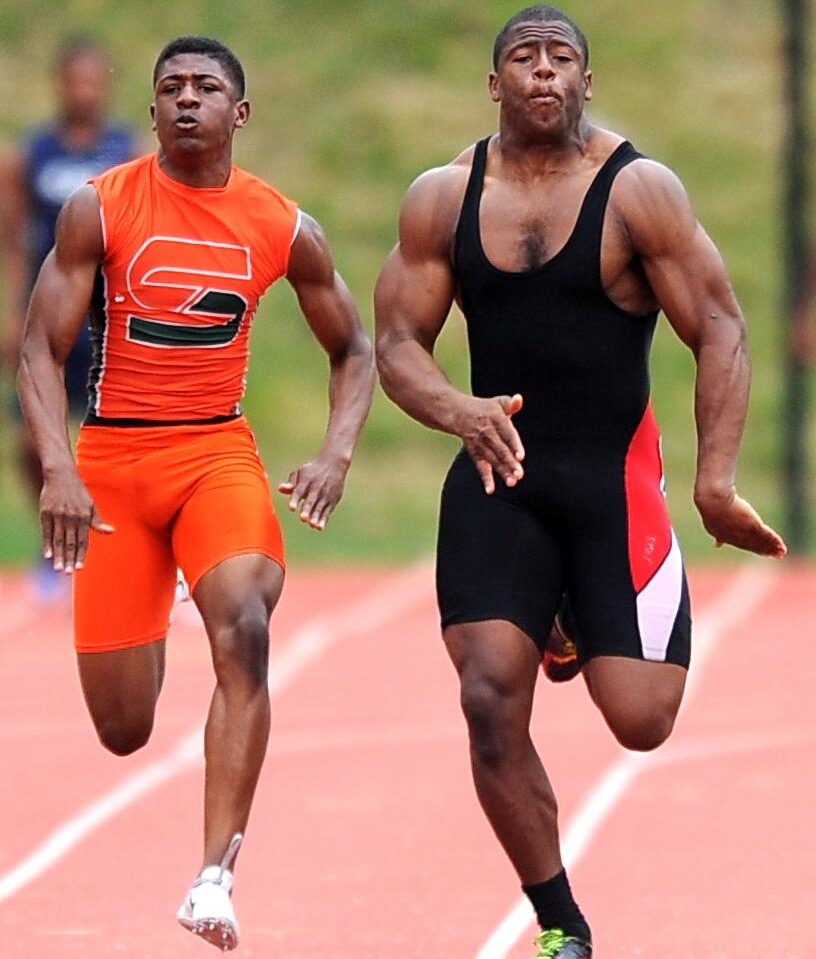 If we count maroon as a member of the red family, we could also include Mississippi State’s Josh Robinson, who recently carried the no. 1 Bulldogs to an uncomfortably close victory over Kentucky. A win’s a win, though, and if the DAK ATTACK campaign were to somehow falter, you better believe Robinson is capable of replacing Prescott as MSU’s chief offensive weapon.

God’s chosen Heisman candidate is finally starting to look the part, and his latest 100-yard performance couldn’t have come at a better time for LSU, or against a stingier opponent. Ole Miss boasts a domineering run-stuffing unit, and if you appear to have the upper hand on the Rebels for even a second, they will rip your goddamn face mask off.

Fournette had the last laugh, though, as the resulting personal foul set up LSU’s offense for an easy, game-winning score. After a conveniently scheduled bye week, the Bayou Bengals will host Alabama, and with another memorable outing, the president of BUGA Nation could easily slide right back into the Heisman race. You know, as long as the voters inexplicably forget about all the running backs listed above.

The Tiers of the NBA: Ranking the Teams From Top to Bottom