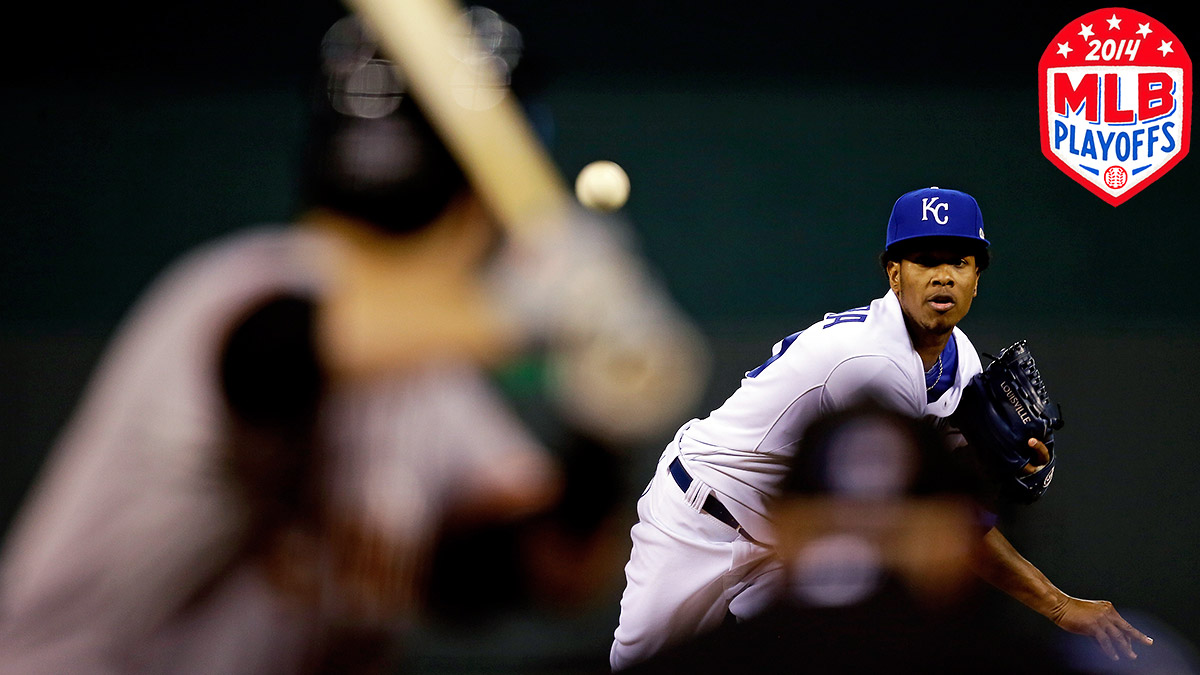 The sentimental favorites are now in win-or-go-home mode, and while the Royals will have home field advantage — and with it the DH, which should keep Jayson Nix from making another inexplicable appearance — they’ve got their work cut out for them. If they’re going to force a Game 7, here are three things they’ll need.

Though I’m duly impressed with what Madison Bumgarner has done this postseason, I also feel compelled to note that Yordano Ventura has the best pure stuff of any pitcher in this series. The middle of the Giants’ order is stocked with power hitters, but it also features a lot of guys whose bat control ranges from good to freakish. If any starting pitcher is going to be able to get the likes of Pablo Sandoval to swing and miss, it’s Ventura, who at his best boasts a closer’s arsenal and the ability to turn over a lineup. Though the Ventura who showed up in Game 2 was good enough to win, that’s not his ceiling. If, however, he again allows eight hits against two strikeouts while facing 23 batters (with only five swinging strikes), I’d bet on this series ending.

All of our postseason coverage!
Ventura doesn’t need to go the distance or even come close to it, but he has to come out ahead against Jake Peavy for the second time in a week. Having five days to recover from an 87-pitch outing should do Ventura good, and he has to go out with the knowledge that one way or another, he’ll have an entire offseason to recover from this start.

I’ll be totally honest with you: The Royals offense can most charitably be described as “streaky,” so any key to the game for K.C. has to be about preventing runs. If these playoffs were a movie — and if any Disney higher-ups are reading this, I’m totally available to write the screenplay, should the Royals come back to win — Games 4 and 5 would be the scene in D2: The Mighty Ducks when Iceland stops the Flying V.

Until that point, Kansas City’s bullpen had been sort of an implacable seven-headed monster, but the Giants beat it up in their two home wins. Brandon Finnegan gave up five runs in an inning in Game 4, and Kelvin Herrera and Wade Davis let Game 5 get out of hand after James Shields kept the Royals close against the suddenly unhittable Bumgarner. The Royals bullpen was once an impregnable fortress, but now the Giants know it bleeds.

I wonder if some of this is simple fatigue. Herrera in particular has been Ned Yost’s workhorse, heading into Game 6 having alternated off days with appearances of 32, 27, and 24 pitches through five World Series games. Given that Kansas City’s bullpen is composed almost entirely of small guys who throw hard — of the seven Royals relievers, only Davis and Danny Duffy stand even 6 feet tall —it’s not inconceivable that, on the back end of a long season, one or more members of the middle relief corps from hell is just out of gas.

Any Royals victory would likely require at least one lengthy appearance from the bullpen, even if Ventura pitches well tonight, and even considering that likely Game 7 starter Jeremy Guthrie — who has as many career playoff strikeouts as Buster Posey has World Series rings — has been inexplicably solid in two postseason starts so far. The bullpen has brought the Royals this far, and the bullpen must take them home.

Here’s something surprising: Jake Peavy has never thrown six full innings in a playoff start. He has pitched well quite often, but he’s never made it to the seventh inning.1 You might think that’s a good thing for the Royals. After all, the relief pitchers who would come in for the fourth, fifth, and sixth innings are usually the vulnerable underbelly of a pitching staff. Not so for the Giants, who have Yusmeiro Petit. Petit has his share of underbelly, but he’s far from vulnerable. He has made one relief appearance in each series, all of three innings or longer, and all scoreless. He bailed out the Giants in that 18-inning marathon against Washington in Game 2 of the NLDS, then twice caddied for Ryan Vogelsong, bridging the gap to the point where Bruce Bochy could play matchups with his best relievers late in the game.

Petit relies on command and deception to great effect, as explained in this must-read Eno Sarris post on FanGraphs. The upshot is that if the Royals force an early curtain for Peavy — or Tim Hudson in Game 7, if it gets that far — the road won’t get easier once the long man comes in.

Tactically, that means that Kansas City can’t be cavalier about expanding a lead: If the Royals get base runners, they have to play for the big inning early, because if they settle for one run at the beginning, there’s a chance they might not score another. Yost has 27 outs with which he can save the Royals’ season, and the more careless he is with those outs, the more quickly that season might end. A sacrifice bunt will advance a runner, but at the cost of 3.7 percent of what’s left of the Royals’ hopes. The cost will be the same for an ill-advised stolen base attempt or choosing the wrong pinch hitter. If Peavy leaves the game with a one-run lead, Kansas City could lose in a way that feels like drowning slowly.