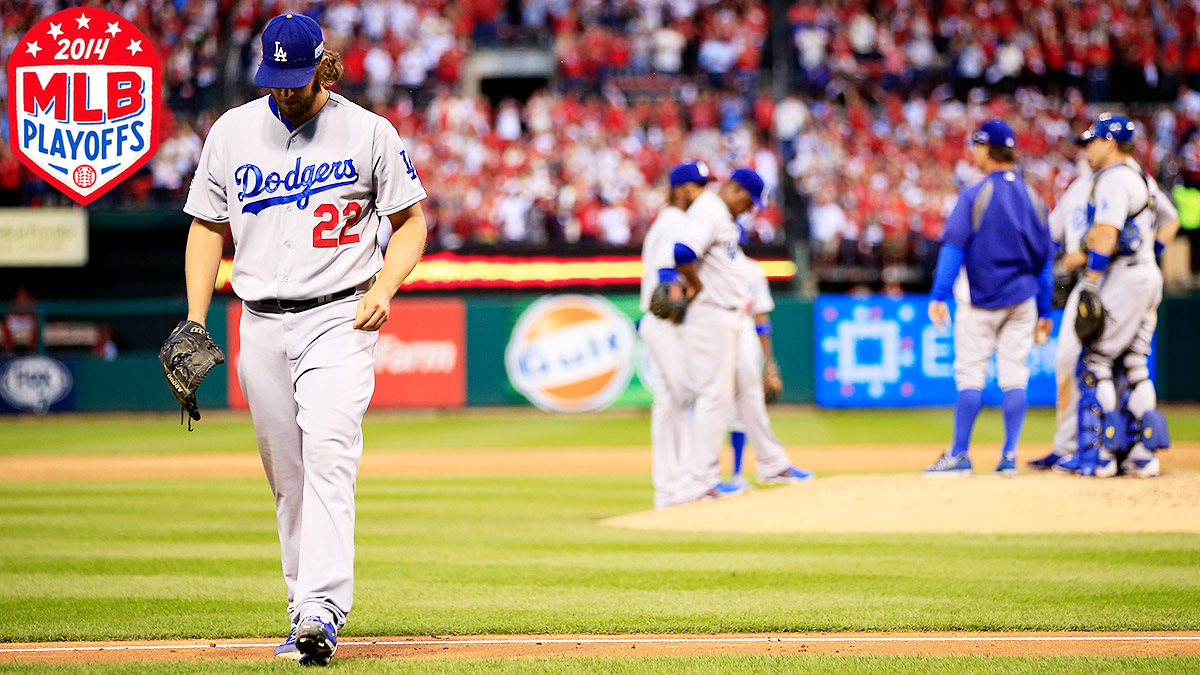 Last night, Madison Bumgarner led the Giants to their third World Series title in five years, capping a topsy-turvy baseball season in which a legend said good-bye, injuries ripped through pitching staffs, and the last two teams standing were wild cards. Now that the 2014 campaign is in the books, let’s look back at what unfolded and identify five lessons we’ve learned for 2015 and beyond.

So at least Mike Trout and Clayton Kershaw, the two best players in the majors right now, have some good company after failing to lead their teams out of the division series this year. Trout’s Angels amassed the best regular-season record in baseball, then got swept in the ALDS by a Royals team few thought could compete. Kershaw’s Dodgers not only bowed out of the playoffs early after winning the NL West, but did so due in large part to two disastrous NLDS seventh innings from the ace himself.

Though the Dodgers would’ve obviously loved to get better results from Kershaw, manager Don Mattingly pushed the lefty too far in reaction to the awful bullpen at his disposal and the offense’s inability to score more than three total runs in the final two games of the series against the Cardinals. And though Trout went just 1-for-12 in the ALDS, he wasn’t solely responsible for his team scoring six runs in three games, or for C.J. Wilson coming up empty in Game 3.

I say this a lot around the Grantland campfire, but it bears repeating: Baseball isn’t basketball. A team can’t just hand the ball to its best player with the game on the line and yell at everyone else to get out of the way — unless that player is Madison Bumgarner, of course. To win big, MLB teams need contributions from the lineup, rotation, bullpen, and bench — not just from the big star.

2. The October Roster Is More Important Than the Regular-Season Record 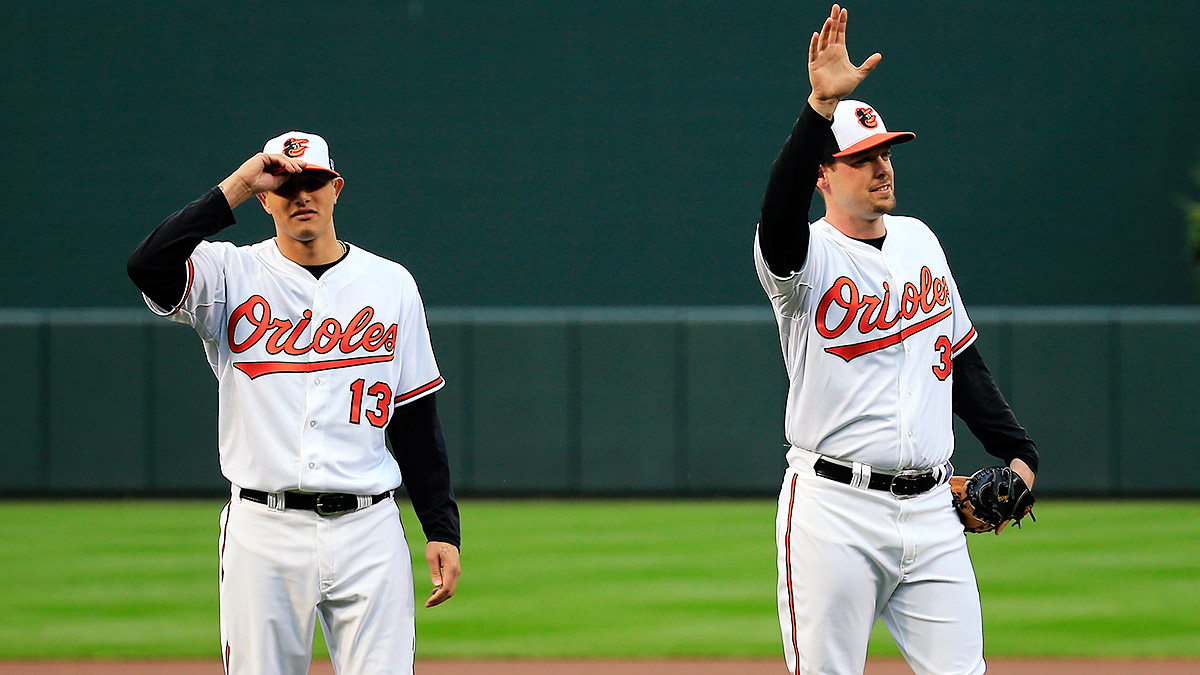 All of our postseason coverage!
Trout’s 98-win Angels took major blows to their pitching staff this season, with young ace Garrett Richards suffering a season-ending injury in August and breakout arm Matt Shoemaker pitching at less than 100 percent in the playoffs. The 96-win Orioles lost two pivotal players to injury in Matt Wieters and Manny Machado, and then lost Chris Davis to suspension, making them far less formidable in October than they would have been at full strength. Meanwhile, the Royals entered the postseason with all of their key players healthy, then fared far better than their record or reputation suggested they would.

The expanded playoff format implemented in 2012 again served its purpose this year, getting two additional teams into the field and positioning those wild-card clubs as heavy underdogs. Maybe it’s time to consider the possibility that the wild-card teams aren’t as puny as we prognosticators make them out to be, though. Baseball carries the smallest home-field advantage of any major North American professional team sport, meaning a wild-card team that sneaks in with 88 regular-season wins can go from afterthought to genuine danger if it’s healthy, fully stocked, and built for October.

3. Managers Matter … But Only to a Point 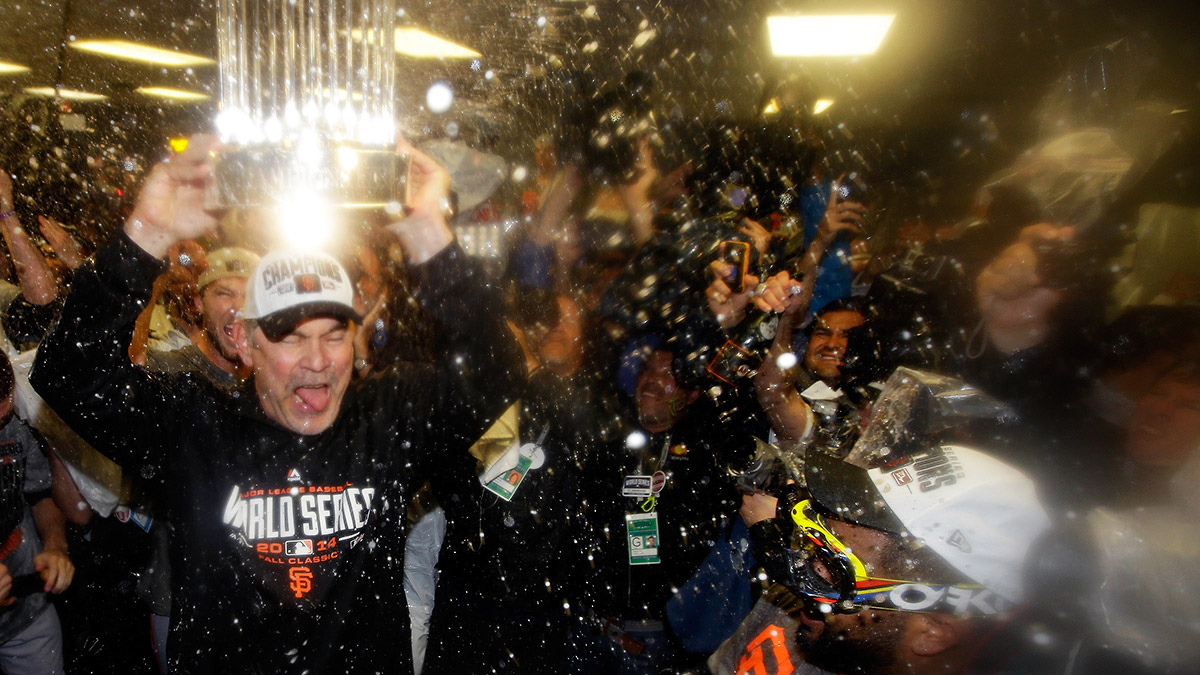 We live in an era when merely describing a player’s greatness isn’t enough. Armed with run expectancy charts, reams of stats, MLB.TV, Twitter, and as many beers as Bumgarner can fit into his hands, we’ve turned second-guessing into a full-time obsession. And that’s not totally invalid: When we see a terrible reliever brought into a tie game because it’s the sixth inning and not the ninth, or a good hitter demoted/benched/moved to the bottom of the order because he randomly went 4-for-34, it’s OK to judge.

Ned Yost has never been a great tactical manager, yet his Royals made it all the way to Game 7 of the World Series; even though his decision-making and rigidity improved in October, that’s still quite telling. And while Bruce Bochy certainly did his part to help the Giants win, it becomes a lot easier for a manager to look brilliant when he has at his disposal a pitcher who performs like Pedro Martinez in the 1999 ALDS. In his August “Managerial Meddling Index,” my colleague Ben Lindbergh noted that Pittsburgh’s Clint Hurdle was the second-most meddlesome manager, while Washington’s Matt Williams was the least, yet both of their clubs made the playoffs.

Again, unlike in other sports (most notably football), baseball bosses rarely have a major impact on games — at least from a tactical point of view, and despite how it might have felt this postseason. So while you might think your team’s manager is the worst tactician who’s ever lived, odds are he has plenty of company. Bochy and Yost earned their share of screen time and headline this postseason, but players win games or lose games; managers are often just the stewards, and sometimes even the bystanders.

4. Trades Can Have More Angles Than We Realize 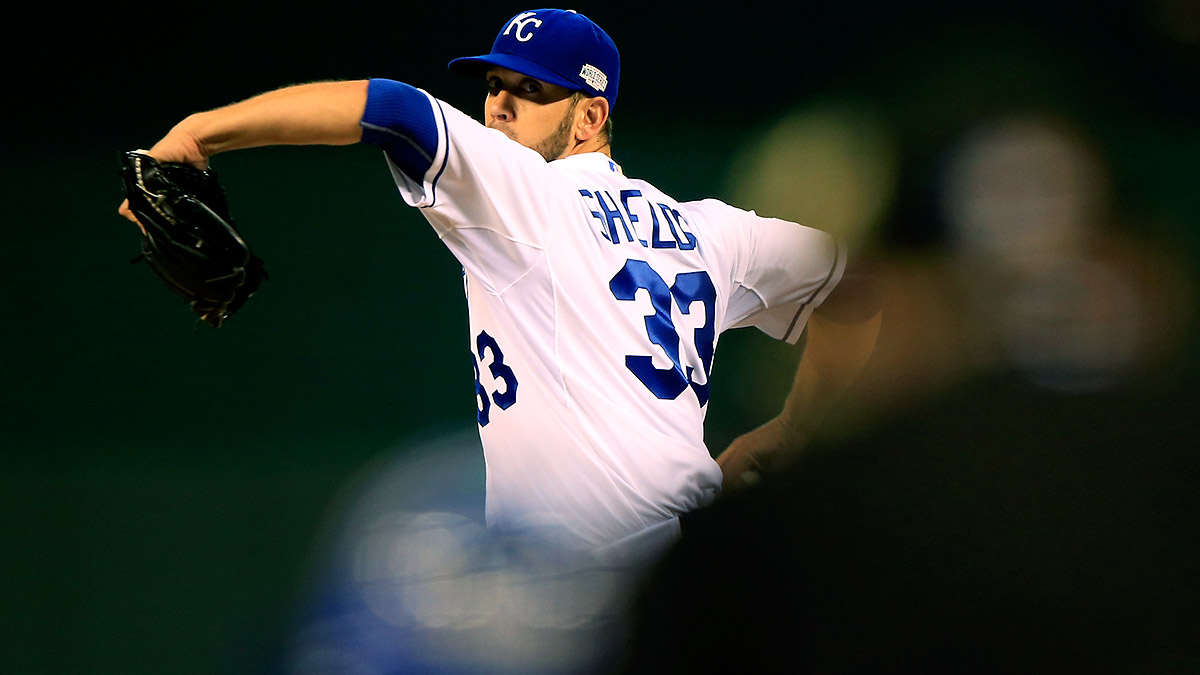 I was wrong about the Royals’ 2012 trade for James Shields and Wade Davis — very, very wrong. Though I didn’t slam the trade on a pure talent basis, I questioned the Royals’ fixation on an “ace” pitcher and wondered whether they could have found a pitcher similar to Shields without sacrificing Wil Myers and three other prospects in the process.

In reality, those of us who ripped the trade focused too much on the blow of losing Myers, failing to see all the benefits Kansas City was gaining with Shields and Davis. Davis had been a mediocre starter in Tampa Bay but a dominant relief pitcher in his final season. We analytical baseball types tend to downplay the importance of any one reliever, since bullpen success is so fleeting, and since so many relievers are failed starters who fare well in a much easier role. But Davis wasn’t merely a good reliever with the Royals this year: He was otherworldly, posting one of the best seasons we’ve seen in the pos–Tony La Russa era of bullpen specialization.

Shields’s contributions were subtler. Though he didn’t pitch well this postseason, he certainly helped the Royals earn their wild-card berth. In addition to pitching well in his two seasons as a Royal, assuming the no. 1 starter mantle as hoped, he helped his teammates out in multiple ways. Shields has been used more than all but two other starters since 2008 and has soaked up more regular-season innings than any other AL pitcher since Opening Day 2013.

All those innings from Shields allowed Yost to save his bullpen for the stretch run and the playoffs, and that workload also took some pressure off 2014 breakout stars Yordano Ventura and Danny Duffy, who could throw five or six quality innings and turn things over to that loaded and fresh pen, thus lessening the risk of overuse for the starters’ delicate young arms. And then there’s the next-level stuff, like Duffy crediting Shields for teaching him the nuances of a great changeup, and generally helping to smooth his transition to the big leagues. (And most important of all: Shields taking the Rays’ post-win tradition of dance parties, flashing lights, and smoke machines with him to K.C., making the game more fun for all involved.)

It’s tough to properly quantify how much, if at all, Davis and Shields affected the Royals’ wins and losses. Still, there’s something to be said for trying to understand not only the hard factors, but the soft factors like leadership and chemistry. The Royals likely had those softer factors in mind when they made the blockbuster Myers trade — and they probably wouldn’t have gotten to the World Series if they’d never pulled it off. Other teams are likewise considering these soft factors when making moves. While we shouldn’t blindly defer to the people in charge just because they’re in charge, it’s worth contemplating what we don’t know, and trying to figure out how and if we can come to know it.

5. It’s Often Easier to Build a Champion Than to Buy One 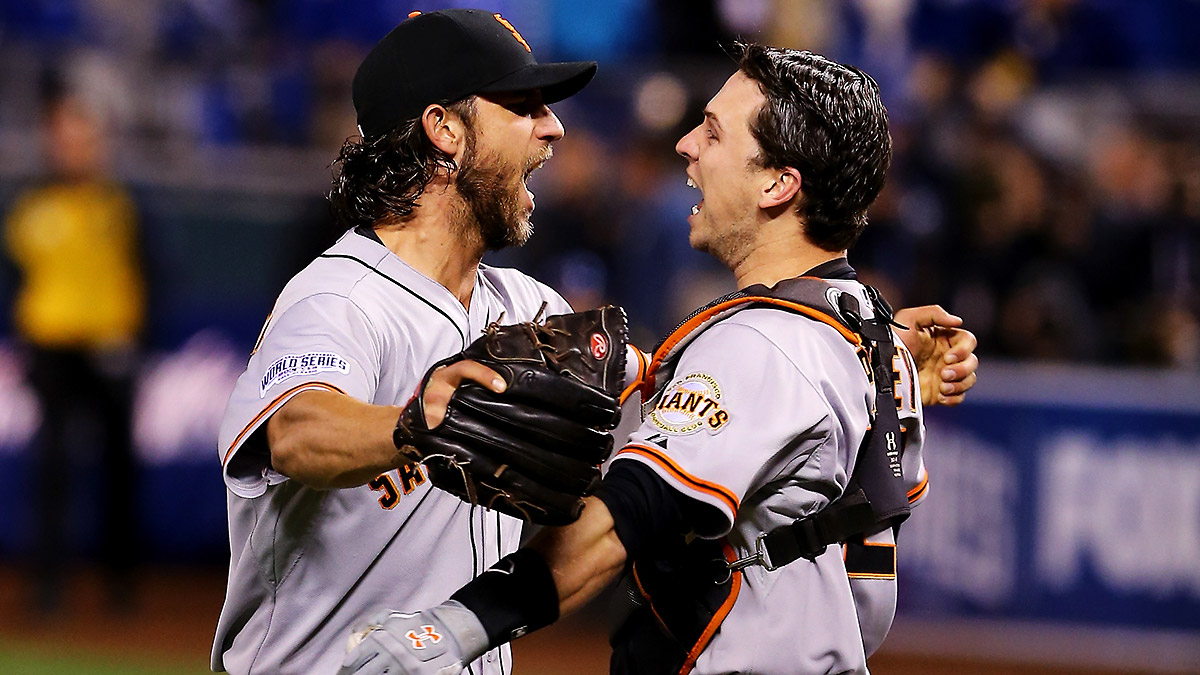 The Giants weren’t pikers this season. Their Opening Day payroll topped $154 million, making it the seventh-largest in baseball. But other than Tim Hudson’s two-year deal, San Francisco mostly steered clear of free-agent contracts and blockbuster trades in the offseason. The core of this team lies in its homegrown players: Buster Posey and Pablo Sandoval, Brandon Belt and Brandon Crawford, Joe Panik and Sergio Romo, and, of course, Bumgarner. To help explain the Giants’ longer, three-titles-in-five-years run of excellence, add Tim Lincecum and Matt Cain to that list. The team that once broke the bank for Barry Bonds (great!) and Barry Zito (not so great!) gradually became obsessed with avoiding big-ticket free agents, preferring to grow its own stars and sign up through their prime years. Even when a key contributor comes over from another team, the Giants absorb him as one of their own, gauge both his ability and his roster fit, and only then ante up to keep him, like they did with Hunter Pence.

One team — even a possible dynasty1 — doesn’t prove anything in a vacuum. The power of scouting and player development still dominates the game. The importance is evident with perceived underdog teams like the Giants, younger and even more overlooked teams like the Royals, and even 800-pound gorillas like the 1990s Yankees, who never would have done what they did without their famous Core Five.2 The best baseball players tend to be in their 20s and not their 30s, which often makes gigantic investments in players on the open market a bad idea, given the nature of baseball’s service-time rules, and how most free agents are either older than 30 or about to get there.

The rub is, there’s no surefire way to beat the system. In the Moneyball era, teams became obsessed with more polished college talent and eschewed higher-risk high school players, especially pitchers. Then a Nolan Ryan or Josh Beckett or Madison Bumgarner comes along, reminding us that with higher risk often comes higher reward. If teams start devoting all of their resources to finding the next big high school hoss who can lead them to glory, it’s a mortal lock that some other team will beat the house by getting the best college players, or the best international players, or the best players from wherever it is Evan Gattis came from.

For now, the Giants are champions. Next year, 30 teams will continue their quest for glory, trying to find their own group of dragon slayers who can win it all. They’ll never have all of the answers, and neither will we. Given how many new, crazy, and impossible-to-predict stories this sport gives us every year, though, would you really want it any other way?

This article was updated to remove an assertion that Roger Clemens was drafted out of high school.