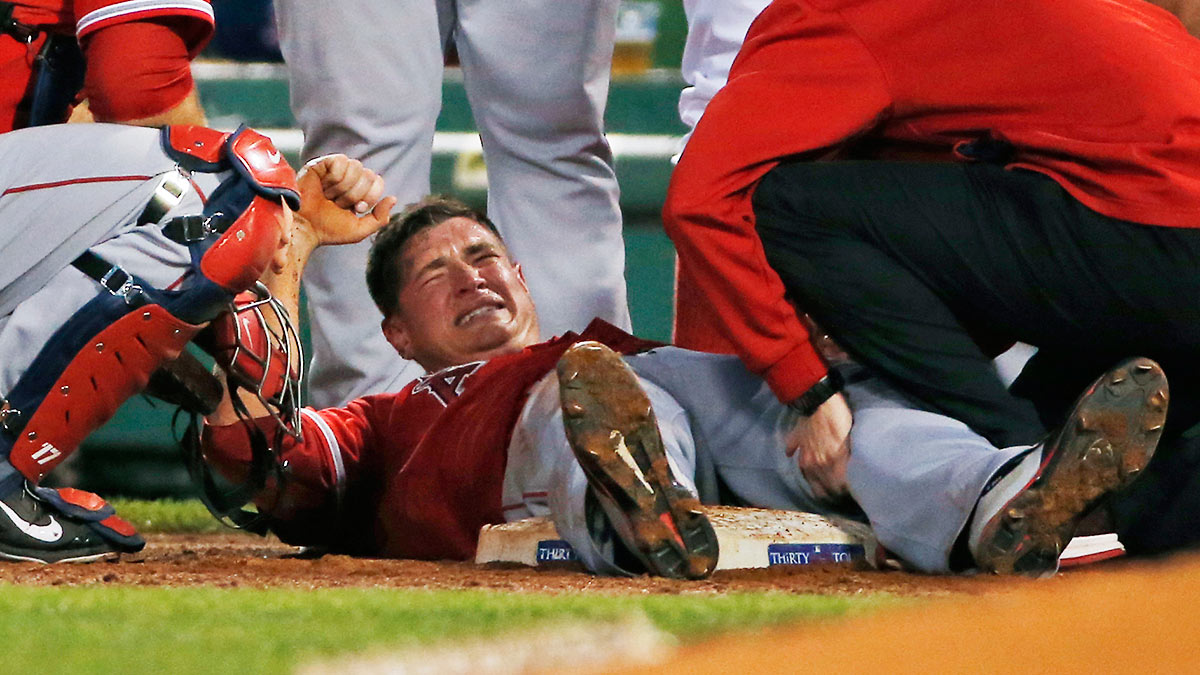 Angels ace Garrett Richards suffered a brutal knee injury while covering first base Wednesday night, likely knocking him out for the rest of the regular season and postseason, and certainly thrusting the team’s rotation into chaos and dealing a major blow to the Halos’ World Series hopes.

Though we won’t know the full extent of the injury until after Richards is more thoroughly examined Thursday, it’s clearly not good: After the game, manager Mike Scioscia called the left patellar tendon injury “significant.” The sight of Richards crumpled on the ground, screaming in agony as trainers examined him and worked to cart him off the field, made the odds of seeing him on the mound again in 2014 seem minute.

The 26-year-old Richards had been the Angels’ best starter this year by a mile, and one of the top pitchers in the American League: His 2.61 ERA was matched by an identical 2.61 FIP, and his 4.4 WAR ranked seventh among AL starters. His average velocity was leading the league.

With lefty starter Tyler Skaggs also out for the year following Tommy John surgery, a rotation that already looked pedestrian after Richards now looks alarmingly thin. The most logical internal candidate to fill Richards’s vacated spot might be Wade LeBlanc. The 30-year-old left-hander has tossed 424.1 career innings in the big leagues, posting an ugly 4.56 ERA with more than twice as many baserunners allowed as strikeouts. He’s delivered slightly more respectable numbers with the Triple-A Salt Lake Bees this year, though, fanning 116 batters and walking 37 in 123.2 innings while putting up a 4.00 ERA that’s respectable in the offense-saturated Pacific Coast League.

Still, given all the moves the Angels have made in recent seasons to get to this point, where they’ve posted the best record and fourth-best run differential in baseball, it’s hard to imagine them being content with LeBlanc. This team spent $365 million on Albert Pujols and Josh Hamilton, gave lucrative contract extensions to numerous key players (including franchise star Mike Trout), and completely overhauled the bullpen during the course of this season with an eye on a World Series championship, not a campaign that falls just short after being derailed by injuries.

Unfortunately, it’s tough to identify a better option than LeBlanc right now. The Angels failed to upgrade their rotation at the trade deadline in part because they lack the prospects to make a major move, and while fans like to fantasize about monster deals in August, stars like Yu Darvish getting sent through waivers typically shakes out as nothing more than a procedural move that goes nowhere. With rare exceptions, the best bet for an August waiver deal is something like the neighboring Dodgers’ recent trade for fringe right-hander Roberto Hernandez.

That’s not a comforting reality for the Angels, given what’s left of their rotation: right-handers Jered Weaver and Matt Shoemaker, and lefties C.J. Wilson and Hector Santiago. While Richards’s 2.61 ERA has been fully supported by excellent peripheral stats, the four remaining healthy starters check in at 4.03. Weaver has scuffled lately, with a 5.40 ERA and frightening .304/.383/.478 opponents’ line in his past five starts. Wilson has struggled for most of the season, posting the worst ERA (4.59) and second-worst walk rate (10.5 percent) since he became a full-time starter four years ago. Shoemaker has been a pleasant surprise, with a strikeout-to-walk rate better than 5-to-1 in 14 starts, but it’s unlikely that he or any of the remaining healthy starters will suddenly start replicating Richards’s huge numbers.

The good news for the Angels is that it’s already late August. Both FanGraphs and Baseball-Reference credit Richards with producing a 4.4 WAR through 26 starts this year, which is excellent, but the waning season means Richards would likely have made just seven more regular-season starts if he’d stayed healthy. Even if he’d continued at his blistering pace the rest of the way, he likely would have only been able to deliver one-win value.

And even if the Halos now lose all seven of those likely starts, they’re almost certainly going to make the playoffs regardless given the 75 wins they’ve already banked. The Angels boast the second highest-scoring offense in the league and the best player on the planet in Trout, so losing one starting pitcher — even one as good as Richards — won’t automatically wreck the season.

Of course, making the playoffs isn’t all that matters. Richards’s absence hurts the Angels’ chances of fending off the A’s atop the AL West, and if the Halos have to settle for a wild-card spot and a one-game playoff against, say, the Tigers or the Mariners, they’ll also have to settle for sending out an inferior starter. It’s hard to feel confident about Weaver’s chances in a single-elimination game against a former Cy Young winner like Max Scherzer, David Price, or Felix Hernandez. And if the Halos do make it past that elimination game, their pitching will be well below full strength against much tougher opponents than the Red Sox squad they knocked off Wednesday night, while Richards’s injury still hung in the air.

One trip to cover first base might have just transformed the Angels from AL pennant favorites into underdogs.