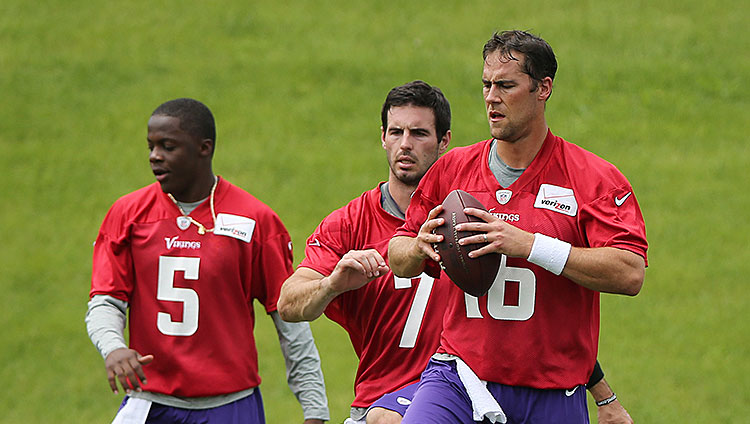 Let’s flash back to 2004. San Diego Chargers quarterback Drew Brees is coming off a season in which he threw for 11 touchdowns and 15 interceptions while completing only 57.6 percent of his passes, going a miserable 2-9 in the 11 games he started. Looking over our shoulders, it’s easy to forget that Brees wasn’t always thought of as the force of nature he is today; back then, he was an erratic and undersize passer who looked more like a high school teacher than an NFL quarterback. (Granted, he still does.)

In light of that thinking — the erratic and undersize part, not the high school teacher part — the Chargers selected Eli Manning with the first overall pick in that year’s draft, then flipped him for Philip Rivers, the fourth pick. The Chargers’ decision meant the same thing it did in May when the Browns took Johnny Manziel and the Jaguars took Blake Bortles and the Raiders took Derek Carr and the Vikings took Teddy Bridgewater. It meant a quarterback controversy, that most hysterical of sports narratives, the modern-day gladiator duel.

Rivers held out and Brees took advantage, winning the starting job and morphing into an entirely different quarterback. Brees made the Pro Bowl that year and the Chargers went 12-4, winning the AFC West. The caretaker quarterback had taken concrete hold on his job. For a little while. Brees followed up his dominant 2004 season with another strong year in 2005, but the Chargers underperformed, falling to 9-7. San Diego then did what rarely happens in the NFL: It let its top-tier quarterback walk, refusing to offer Brees the kind of contract he desired.

The teachable lesson here doesn’t have to do with Brees, though — or it does, but indirectly. The Chargers knew that by bringing in Rivers, they had committed themselves to him more or less by default. Short of winning a Super Bowl, Brees’s eventual exit from San Diego was assured by sheer pragmatics: In the NFL, you do not draft a quarterback in the first round and let him stagnate on the bench for long. Even when that comes at the expense of Brees, who in 2005 was already looking like he could be one of the best passers, and least charismatic commercial actors, of the coming decade.

It’s more than just a question of performance. Draft picks are investments, and to properly capitalize on their investments, teams must, at some point, deploy them, whether that’s on the field or in a trade. But trading a first-round pick — in particular, a first-round pick who plays quarterback — means relinquishing the ultimate promise of youth and potential. Professional football teams do not like to do that.

Back to 2014. Brian Hoyer will start Week 1 for the Browns, and the Jaguars keep saying how committed they are to Chad Henne as their starter this season. The Raiders will certainly begin the year with Matt Schaub under center, and the Vikings appear, however improbably, to be willing and ready for more Matt Cassel performances.

All four of these quarterbacks now occupy a weird and Pyrrhic role: They’re keeping a seat warm for young players whose mere presence in town indicates that these older guys have been judged inadequate in the long term. Their futures are not in their respective cities; at best, they’ll play well this year and earn themselves another job somewhere else, once their front offices have decided it’s time. If you’re prone to flights of inquiry, and I sure am, you might even wonder if these teams are at least partly hoping for the failure of their caretaker quarterbacks — no front office likes having to make a choice, and if Hoyer throws nine interceptions in his first three games, the choice is made for them.

But regardless of how well they play, those four guys will move on. Possibly they’ll get injured, and the rookie will secure the starting spot while they recuperate. Possibly they’ll suck, doomed by hamstrung rosters or their own lack of ability. Least likely of all, they might succeed, in which case, the problem becomes one of creativity.