The World Series Winner’s Curse: The Downside of Standing Pat After Glory 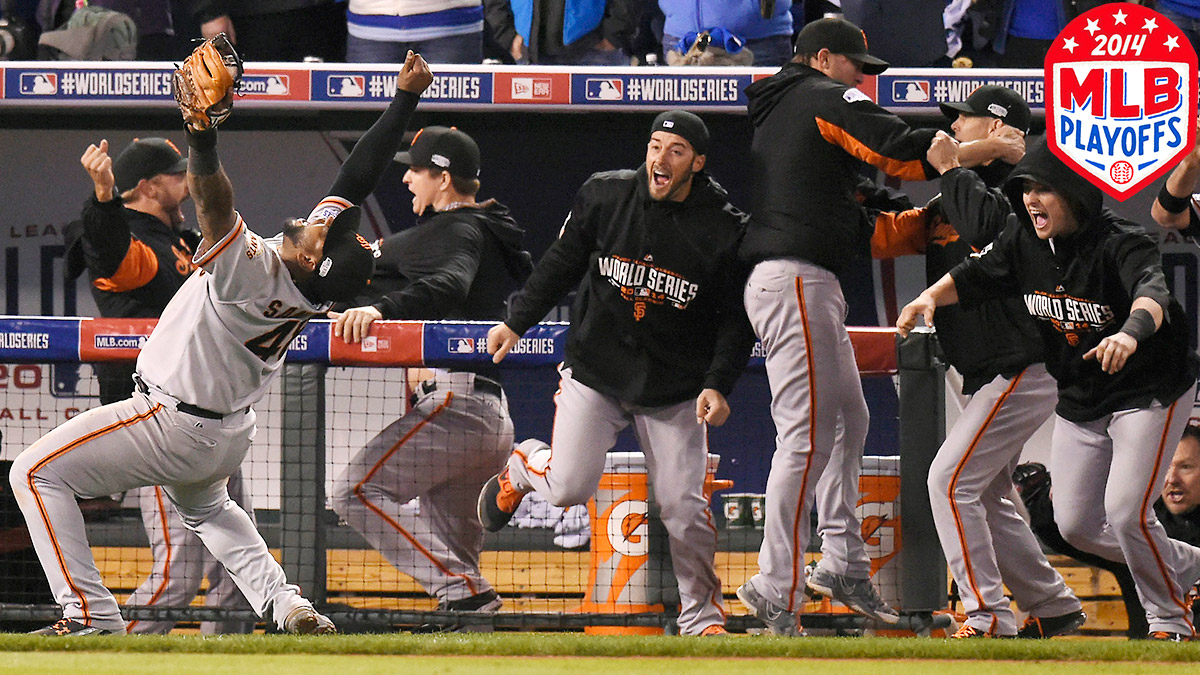 On Wednesday, we were awash in winner-take-all excitement, willing Alex Gordon to score and celebrating Madison Bumgarner’s dominance. On Thursday, we were reading about future free agent Felipe Paulino. That was a bit of a downgrade, but when the World Series ends, we have no choice but to turn our attention to more mundane matters. Eventually, our playoff hangover will subside, and we’ll get into the hot-stove spirit, obsessing over signings and remaining roster needs as avidly as we just were over bullpen usage and bunts. But even when we do put a memorable postseason behind us, we might find that the impact of the World Series extends well into the winter.

When Pablo Sandoval settled under Salvador Perez’s pop-up, gloved it, and collapsed to the ground, he ended the Royals’ run as America’s sweethearts and secured a third title in five seasons for San Francisco. Indirectly, though, the impending free agent’s catch might also have helped determine what uniform he’ll be wearing the next time he takes the field.

During the wild-card era, something curious has happened to teams that have won the World Series. The following table shows the collective regular-season winning percentages of World Series winners and losers in both the years they won their pennants and the following seasons.

Not surprisingly, teams in both groups tended to regress in the seasons immediately following their World Series appearances. To reach the World Series, a lot of things have to go right — clutch hitting, good health, lucky bounces, unhittable bullpens — and those things rarely go equally right in consecutive seasons. Even though the teams in both groups won essentially the same number of regular-season games on the way to their pennants, the World Series winners declined by more than twice as many points of winning percentage in the following season as the World Series losers. That’s somewhat surprising, in that there’s no obvious reason to expect losing World Series teams to be better positioned for the near future than the victors.

All of our postseason coverage!
There are many potential explanations for why we’ve observed this effect, not least among them small sample size. We’re talking about 19 teams in each 1995-2013 sample, so the stats can be skewed somewhat by one outlier like the 1997-98 Marlins, who fire-sold from 92 to 54 wins in one winter. But there is one possible cause that seems to be borne out by the stats: Championship teams, as Baseball Prospectus’s Sam Miller demonstrated after the Giants’ 2012 title, have shown a greater tendency to stand pat over the offseason rather than tinker with their talent.

We can see this difference by comparing the year-to-year roster turnover rates. If you add up the average wild-card era team’s total plate appearances and batters faced, then check to see what percentage of the team’s total PA and BF were produced by the same players the following year, you find a 68.8 percent agreement between the two rosters. Among teams that won the pennant but lost the World Series, that rate rises to 72.0 percent. And among teams that won the World Series, it climbs still higher, to 78.3 percent. In other words, the players on the typical World Series winner will account for almost four out of five plate appearances/batters faced by the same team in the subsequent season. The takeaway: Teams that win the World Series generally don’t change much between recording the last out in October and reporting to spring training several months later.

The difference is even starker if, as Miller did in his BP piece, we look at the return rate of only the hitters and pitchers who played in the World Series (weighted by plate appearances and batters faced, respectively) instead of comparing playing time over full seasons. That way, we can focus on the core pieces who contributed to the last playoff series and exclude the players on each pennant winner who were traded or released well before the postseason started. Despite the best efforts of former Marlins owner Wayne Huizenga and his incredible disappearing pitching staff, the World Series winners have the higher combined return percentage:

This table doesn’t tell us much about the quality of the players retained or rejected, or the composition of the respective rosters. Nor does it reveal how much money the clubs spent, their amount of payroll room remaining, or how they fared in the seasons preceding their pennants. It’s worth noting, though, that the rosters of the World Series winners were slightly older, on average, than those of the World Series losers when weighted by playing time — 29.7 to 29.4 — which would suggest that the World Series winners would have had at least as many players of free-agent age.

We can come up with a variety of reasons World Series winners would be more likely to bring back their players. Maybe it’s easier (and cheaper) to convince players to stay where they are when they’re wearing World Series rings and filled with a post-Series sense of fulfillment. Maybe the post-title attendance and revenue boosts that World Series winners can anticipate free them up to spend on extensions and re-signings. And maybe the bond that forms between teammates, players and fans, and even players and front offices during a successful playoff run makes owners and executives more reluctant to break up the band.

However, the stand-pat approach has its pitfalls. If you’re coming off a World Series win, your roster is likely stocked with players who performed at the top of their potential. If you spend to bring those guys back, you’re probably buying high. Free agents are usually past their primes, so when you retain them, you risk paying for past performance.

Think of it this way: If you’re depending on a collection of players who just reached the pinnacle of the sport, there’s nowhere for the group to go but down. The wild-card-era World Series winners with the highest roster return rate were the 2002 Angels, who declined from 99 wins to 77 after giving 91.7 percent of their playing time to returning players in 2003. The winners with the lowest roster return rate, ’97 Marlins aside, were the 2004 Red Sox, who let fan favorite and future Hall of Famer Pedro Martinez take the Mets’ money (a decision that ultimately worked out well) and recorded a roster return rate of 63.9 percent. In 2005, Boston’s win total sank only slightly, from 98 to 95. At times, loyalty and emotional attachment can be counterproductive, and the ruthless approach pays dividends.

Maybe major league teams are a little bit like superstitious fans who insist on sitting in the same spot until their team stops winning. Losing teams might conclude that if they want to win, they have to take action and try something new, while winning teams could get complacent and conclude that they needn’t mess with success. The spending stats support that interpretation. From 2000 on — as far back as the team payroll data at Cot’s Contracts extends — World Series winners outspent losers by $17.5 million during the seasons in which they won their pennants. But the losing teams made up much of that gap over the following winter, ramping up payroll by 19 percent, compared with 12 percent for the winners.

Sandoval is a good example of a player whose future might have been affected by the outcome of Game 7. A career Giant, the third baseman entered the organization more than a decade ago and amassed more than 20 Wins Above Replacement in his first six full seasons of service time. But he’s bound to command a lucrative, long-term contract, which represents a real risk in light of his always-oscillating weight and somewhat volatile season-to-season performance. If the Giants didn’t have doubts about how he’d age, they might have made more of an effort to extend him early.

However, the Giants just won the World Series in large part because of Sandoval’s defense and bat. He hit .366/.423/.465 in 71 postseason at-bats, OPS’ing more than 1.000 in both the NLCS and the World Series. If GM Brian Sabean and CEO Larry Baer were on the fence about making overtures before October, the recency effect might sway them. In the wake of the World Series, their most easily accessible memories of Sandoval show him mashing like a superstar, not scuffling as he did in September. This month was a reminder that with Sandoval, San Francisco can win. Without him, who knows? In his absence, third base would once again become a source of anxiety, the province of flawed players like former Giant Pedro Feliz.

Sandoval won’t turn 29 until next August, so while he might land an overly long commitment, he probably wouldn’t decline quickly enough to hurt the Giants next season. Another free agent, Mike Morse, might. Morse did his best hitting in the first two months of the season, and he missed most of September with an oblique injury. Had his campaign ended on that note, it would have been easy for the Giants to say thanks and so long. Instead, Morse hit a huge homer in the NLCS, then drove in the winning run in World Series Game 7, which could tempt Sabean to re-sign him. And unlike Sandoval, Morse is probably headed for a downturn in 2015: He’s coming off his best offensive season since 2011, and he’ll turn 33 in spring training, putting him at prime decline age.

Sabean is an unrepentant re-signer, but perhaps not coincidentally, the Giants’ rosters have been considerably more stable after their even-year World Series wins than after their odd-year playoff misses.

After 2012, for instance, Sabean let a few guys go but spent almost $100 million to re-sign Angel Pagan, Marco Scutaro, and Jeremy Affeldt and to extend Santiago Casilla. The only notable outside addition the Giants made was Andres Torres, who had been on the 2010 title team. It would be a stretch to say that standing pat cost the Giants trips to October in 2011 and 2013, but one could make a case that it contributed.

The Royals have more potential departees than the Giants, and with the profits they’ve raked in from postseason home games and stand to gain from attendance increases in 2015, they’ll be expected to spend even more than the franchise-record $92 million they shelled out this season. If they had won the World Series, they might have found it hard to let anyone go, even if cutting ties with big names would have been the best way to prepare the roster for 2015. Billy Butler, James Shields, and Nori Aoki would have been True Royals, to borrow a cliché from a more successful franchise, and Dayton Moore might have overextended the payroll to retain them, to the detriment of other areas of the roster. As my brief exposure to Royals talk radio en route to the airport on Thursday confirmed, there’s still considerable pressure on the team to spend, but not necessarily to keep the entire core together. Falling just short on Wednesday may have given the Royals the freedom to spend smart instead of spending out of sentiment.

Again: It won’t necessarily be a bad thing if the Giants bring back their free agents, and it won’t necessarily benefit the Royals if they let some of theirs walk. But maybe, just maybe, there’s a potential year-after penalty associated with winning the World Series. And because Morse muscled a fastball, Bumgarner got Perez to chase, and Sandoval caught the pop-up that cemented San Francisco’s win, the Giants might be more likely than Kansas City to incur that cost. If so, their fans will probably consider it an acceptable price to pay.