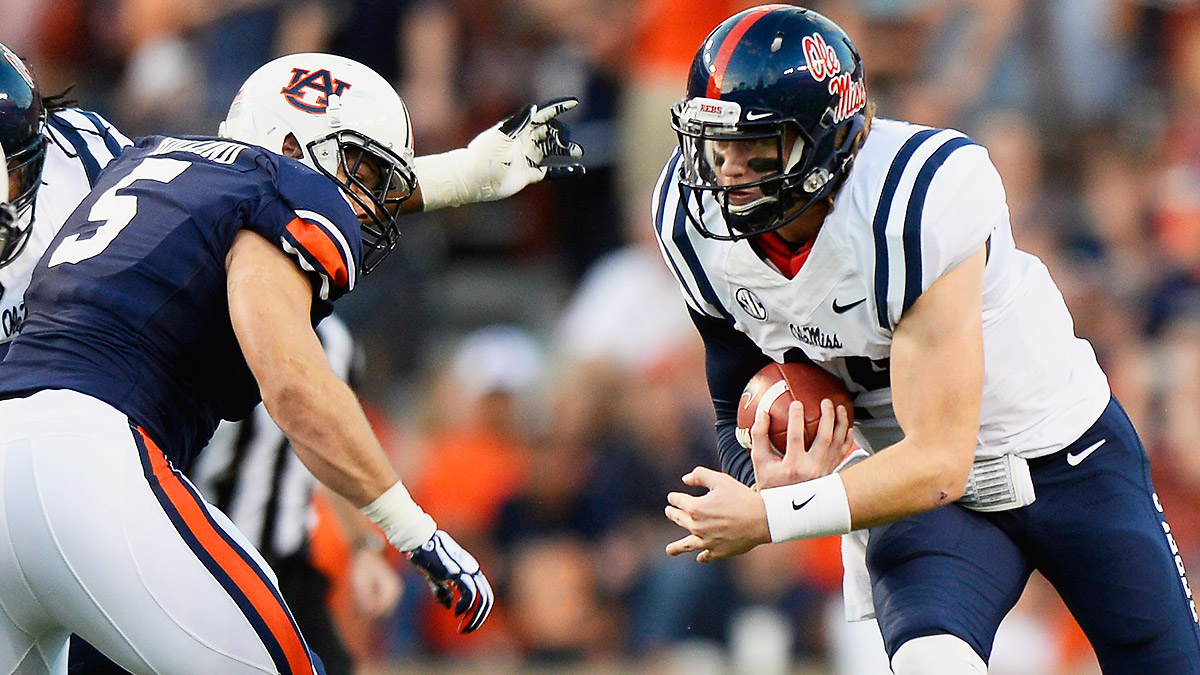 Does it feel like we’ve been waiting 300 years for the black-flame candle to be lit and for the SEC West to sort itself out? Your wish is this season’s command: Only one undefeated team remains in the division, and every division contender gets to spend the next few weeks running amok,1 straight at one another.

How to watch: 7 p.m. on ESPN or online at WatchESPN

Story line: At the risk of unironically quoting Bill Hancock on matters relating to the playoff …

Summary of committee's rankings: it's close, it's early, it's going to change.

Take heed, and take heart if you need to: There will be some semblance of order in the SEC West. Head-to-head meetings will shuffle the least worthy out of the bracket, at which point we can all stop braying about it. Both Auburn and Ole Miss already bear one loss, and even the team that falls short in this contest will remain entirely capable of ruining the season of the other contender — the Iron or Egg bowl opponent — it faces in November. Breathe in, breathe out, and get genuinely mid-aughts Pete Carroll–level jacked to see AU’s offense barrel straight at OM’s defense. (Bonus gossip tidbit: Ryan Aplin intrigue abounds!)

Story line: The Horned Frogs–Mountaineers game merits a GameDay invasion in November — just like we drew it up in September, right, y’all? Check out David Ubben’s chat with Oklahoma State about containing WVU phenom receiver Kevin White, and look at how TCU might be able to better corral him; speaking of star pass-catchers, the injured Josh Doctson will make the trip to Morgantown. But the no. 1 fact you need to fix into your mind mind heading into this game is this:

Story line: Sleep until noon and stay up for this one, East Coasters. The Sun Devils may have health concerns at QB, the Utes will be operating without their best receiver for the rest of the season, and there’s some delightful divisional chaos riding on the outcome.

No. 2 Florida State at no. 25 Louisville (Thursday, 7:30 p.m., ESPN/WatchESPN): You thought you no longer got frightened around Halloween as an adult? How’s this for scary: People are going to say nice things about defensive coordinator Todd Grantham during this game, and they might be right. Louisville, which boasts the nation’s stingiest defense, is rounding back into healthy form on offense, and just in time: The Cards’ remaining schedule is composed entirely of quality teams and trap games (vs. the Noles, at Boston College, at Notre Dame, vs. Kentucky).

Highlights from a spooOOOooky Week 10 undercard.

No. 12 Arizona at no. 22 UCLA (10:30 p.m., ESPN/WatchESPN): UCLA’s ranking feels charitably squidgy right this minute, but this is not the year to predict the direction of a freewheeling Pac-12. The Wildcats were the last team in the conference to leave the undefeated ranks behind, and currently sit in a three-way one-loss scrum atop the South standings with Arizona State and Utah.2

Stanford at no. 5 Oregon (7:30 p.m., Fox): We’ve seen this movie before, and it ends in black-and-white with men smoking expensive French cigarettes and crying softly. We’re perversely less interested in the typically key battle between Oregon’s offense and Stanford’s defense than we are in seeing which side can out-adequate the other between Oregon’s defense and Stanford’s offense.

Colorado State at San Jose State (7 p.m., CBSSN): The Rams are 7-1, and the balance of their November goes like so: versus Hawaii, versus New Mexico, and at Air Force. CSU could get to 11 wins without any trouble at all.

Where might things get real weird? Boston College at Virginia Tech (12:30 p.m., ESPN3) has kind of an eerie feel about it, and if Friday’s games don’t top off your gratuitous violence tank, poor Kansas will be no. 13 Baylor’s first opponent since the Bears’ loss to West Virginia (4 p.m., FS1).

Where might we find spicy rivalry action this week? We’ve got two traditional and ultra-ultra-American rivalries bracketing the day, with Air Force at Army early (11:30 a.m., CBS) and no. 10 Notre Dame at Navy late (8 p.m., CBS). There’s a directional Michigan fight, with Central at Eastern (1 p.m., ESPN3). There’s a terribly lopsided Big Ten rivalry that predates one team’s existence in the Big Ten, in the form of Maryland at Penn State (noon, ESPN2/WatchESPN). There’s the requisite Hella Awesome Big Ten Trophy Game of the Week, with Illinois heading to no. 16 Ohio State to fight over the Illibuck turtle (8 p.m., ABC/ESPN3). And there’s the World’s Largest Outdoor Cocktail Party, to be played without Todd Gurley, who was “sentenced” Wednesday to additional suspension time plus community service, because if there’s one thing a kid needs to make amends for, it’s putting signed mini helmets out into the community, that MONSTER. No. 11 Georgia and Florida kick off at 3:30 p.m. on CBS.

Who’s still undefeated, who’s winless, and where are they? The 2014 season has shrunk both of these columns quite rapidly. Marshall is off this week; Florida State, as previously mentioned, is at Louisville on Thursday night; no. 1 Mississippi State hosts Arkansas in Starkville on Saturday night (7:15 p.m., ESPN2/WatchESPN), and Dak Prescott is going to bedazzle his walking boot if you keep asking questions about it, so definitely keep asking questions about it.

Somehow, some way, the lone winless team in FBS football is SMU, idle this week. Still seeking their first wins over an FBS team: Connecticut, which hosts UCF (sorry, UConn) and Georgia State, which travels to Appalachian State (maybe, GSU?).

For whom should I cheer to propel the glorious dream of #4CC to victory? Some explanation: Our dearest hope in life right now is to see the ACC Coastal finish in a seven-way tie, with every team holding a 4-4 conference record.

#Duke is leading #UNC is charging and Operation 4-4 is getting closer in the Coastal @HollyAnderson pic.twitter.com/Tsk5bsSIYu

For those of you following along at home, the teams to monitor this week are Georgia Tech and Virginia Tech: To pull this off, the Jackets can register only one more conference win, while the Hokies can sustain only one more loss. For Georgia Tech, that means dropping two of its next three games against Virginia, NC State, and no. 21 Clemson; for Virginia Tech, it means taking three of four from Boston College, no. 24 Duke, Wake Forest, and Virginia.

Also, it’s not worrying time just yet, but do keep an eye on Duke; the Blue Devils have played only three conference games to date, but need three additional ACC losses to maintain the necessary balance. This team may have the best chance of ruining our fun, as none of Duke’s remaining opponents currently boast better than a 4-4 overall record. (On the bright side, we might see the REPEAT DIVISION CHAMPION DUKE BLUE DEVILS. There’s always something to live for, isn’t there?)

Where’s my late game? The Pac-12 provides your late game of choice in Week 10 with Utah-ASU, but for commercial breaks, there’s the alternative of Utah State at Hawaii (11 p.m., Mountain West Network).

If you don’t believe, you’d better get superstitious.