Rich Rodriguez and Arizona, Playing From Minute One 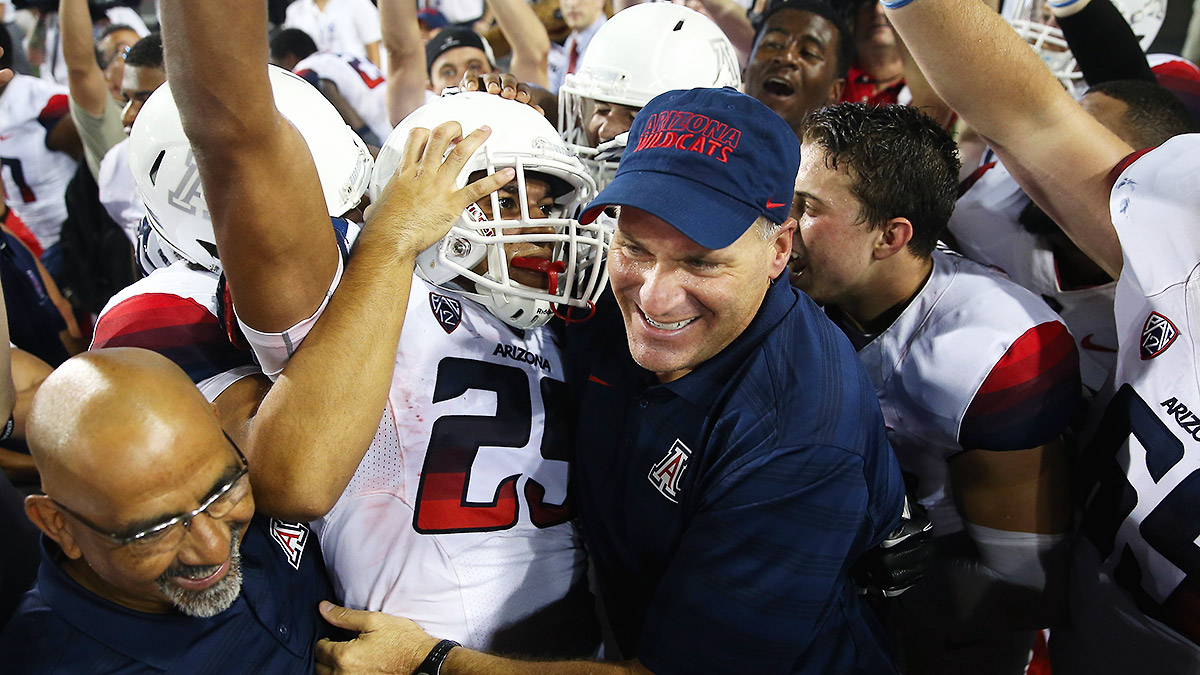 A block or so down Sixth Street, across the Highland Quad from the stadium where Arizona’s Wildcats make their home, a structure not unlike a space-age tree fort houses the university’s Laboratory of Tree-Ring Research. The lab, which existed under the stadium itself for three-quarters of a century, conducts regular tours for dendrochronology enthusiasts, allowing visitors to gaze at hunks of ancient trees and ponder the passing of ages.

To the scientists here, Rich Rodriguez’s reign would seem like a blip, a blink. To those of us living and dying by three-year hire-and-fire coaching cycles, it seems like the Wildcats have crammed a ridiculous amount of action into two seasons and change.1 So much has gone on in 2014 in particular, and yet no. 15 Arizona is somehow only a third of the way through its conference schedule. Beating Cal on a Hail Mary, knocking off second-ranked Oregon in Eugene to rocket from unranked into the top 10 faster than any team in history, and then losing to USC on a missed field goal in consecutive weeks will have that effect.

To follow a Rodriguez campaign is to set up camps at both ends of the human emotional spectrum. This is the guy who takes to the homemade slip-’n’-slide with his team at the end of camp, and who’s good for at least a couple camera shots per game in which he appears to be foaming at the mouth on the sideline. After the Wildcats beat the Ducks, he danced with his team in the locker room. In his postgame press conference following the loss to the Trojans, he was almost vibrating with anger.

That whole session lasted about three minutes; his answers were contained, factual, and delivered in tones just short of barking. The icing timeout that USC coach Steve Sarkisian called on kicker Casey Skowron, negating Skowron’s successful go-ahead field goal with the Cats down by two and less than 15 seconds remaining? “If nothing else, it lets you get your bearings about you.” Skowron missed his second attempt wide right, turning the ball over to the Trojans for a victory formation to seal the loss. Javorius “Buck” Allen, who gained 205 rushing yards against the Wildcats’ undersized and undermanned defensive front? “Yeah, we didn’t tackle him,” he paused, before adding grudgingly, “very well.”

After a loss like that, Rodriguez’s eyes don’t maintain contact with anyone for very long. They’re already focused further away than the physical confines of the media room will allow, like he’s reviewing game film in his head. He permits himself and his team a strict 24 hours to feel any necessary feelings after a game before moving on, in this case to a bye week and then a road trip to Washington State. Staring down a Pac-12 race that’s been reset again in a league in which every contender already has at least one loss, there’s not a moment to lose. There’s still time for Arizona, at 5-1 overall and 3-1 in league play, to win the South. There are still ways. But after following the program-defining upset of Oregon with a shank and a stumble against USC, the gap between the Wildcats and the conference championship game is starting to look like how an unfinished freeway looks to a speeding bus.2 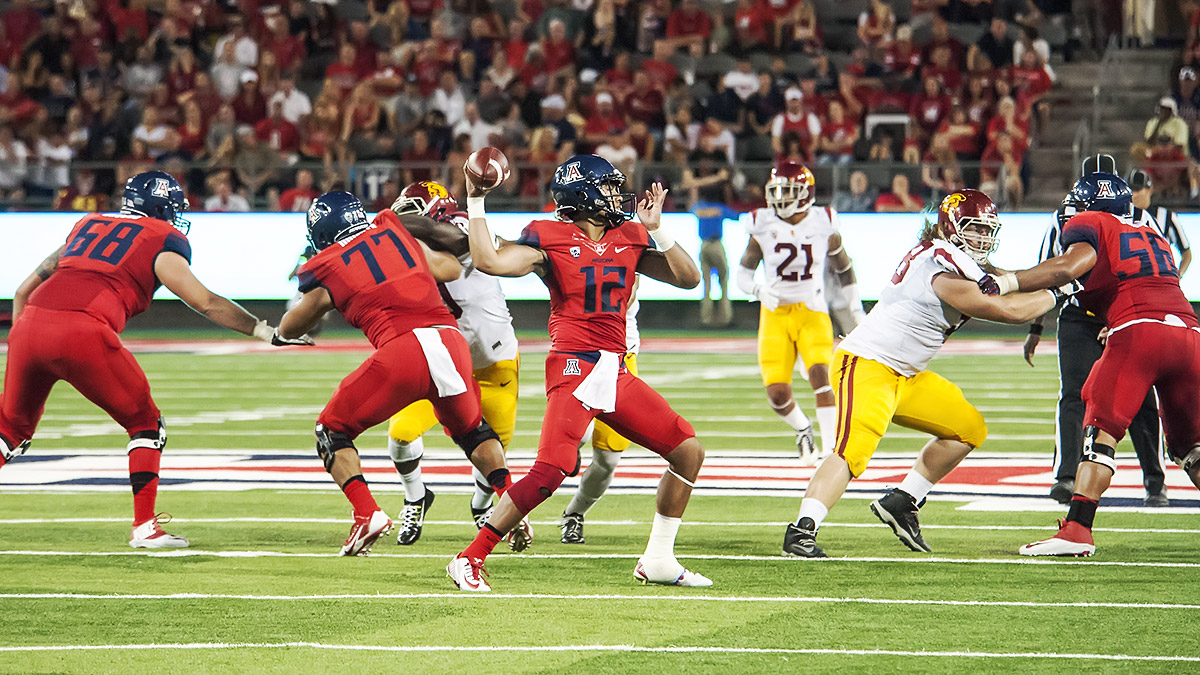 Speed bumps aside, Arizona is a program ascendant, make no mistake. Rodriguez’s first two seasons in Tucson netted 8-5 records and back-to-back bowl victories. That USC game took place in front of a sellout home crowd, with a shoulder-to-shoulder student section hollering behind the home bench and crowding the bleachers along the eastern sideline. There are worse things for a coach to be upset about than making a 5-0 run, with a top-five road upset along the way, before losing a game — particularly with the inexperience Arizona has at quarterback, at running back, and along the defensive line. And as a former top-10 team that suffered a stinging loss, the Wildcats are in good and mighty company this year.

But Rodriguez has never been what you’d call a stoic, preferring to visibly live and die on the sideline along with the swings in his teams’ fortunes. He’s got company this year, as navigating this Pac-12 must be absolutely maddening to any coach in the league. Preseason North favorite Oregon has already lost; South favorite UCLA has lost twice; USC, before knocking off Arizona, had beaten Stanford on the road before coming infamously unglued the following week at Boston College; that Stanford team has lost three times already.

So what happened when the Trojans came to Tucson made its own kind of convoluted sense. It’s only natural that the game wound down to a showstopping onside kick, followed by the made field goal from Skowron that was negated by a USC timeout, followed by the Skowron miss. Of course it did. That’s just what Pac-12 teams do this year. They’re like Rodriguez himself, flaunting the highest highs and the grimmest lows on full, exuberant display. With Arizona’s stadium lights on after dark, the surrounding landscapes and building lights were glared out by the illumination of the field, giving the impression of a game played on a soundstage and lending an extra element of unreality that’s so perfect for this league in this season. They could have covered the turf with gray sand and staged another moon landing after the fans cleared out, for all we know.

“You can’t play ’em over, but it’s like reliving it all over again.” Sunday afternoon, two-thirds of the way through his initial film review, Rodriguez had gotten his blood down to a mild simmer, but was still picking his psychic scabs. “I wanted to do it today, because if I didn’t do it today, I’d be mad another 24 hours after this.” He was gentle with Anu Solomon, his redshirt freshman quarterback, whose progress has been remarkable given that he wasn’t anointed as the starter until the tail end of the preseason. “But every once in a while, we put so much on him and he makes a mistake. You can’t just say ‘aw, he’s no good.’ He doesn’t get rattled. And he’s got a quiet leadership about him.”3 He went easy on Skowron, who’d made 11 of 13 field goal attempts before facing USC. “You don’t want to be where it’s down to a field goal. You want to be better than that.” His own coaching, he’ll chew on for a while. “I’d go back and call a lot of plays over. The two-point play, I think we had it. We had a misread on that with Anu. But we put a lot on him. That goes back on me. I’ve got to eliminate some options in that situation.”

It’s an interesting time to be an up-and-coming team in the Pac-12, with the league’s shallow end disappearing and the deep end getting deeper all the time.4 Arizona’s next opponent, Washington State, is one of only two teams in the conference sporting a losing record, but even the Cougars cannot be counted on for a pushover win. With running backs Terris Jones-Grigsby and Nick Wilson missing practice time with injuries this week, and with Wildcats coaches still not satisfied with the amount of defenders they can rotate against Mike Leach’s offense, Rodriguez took nothing for granted during his Week 9 press call: “I don’t remember a stretch of my career where we’ve had five straight games go down to the fourth quarter. And it’s probably going to happen even more.” 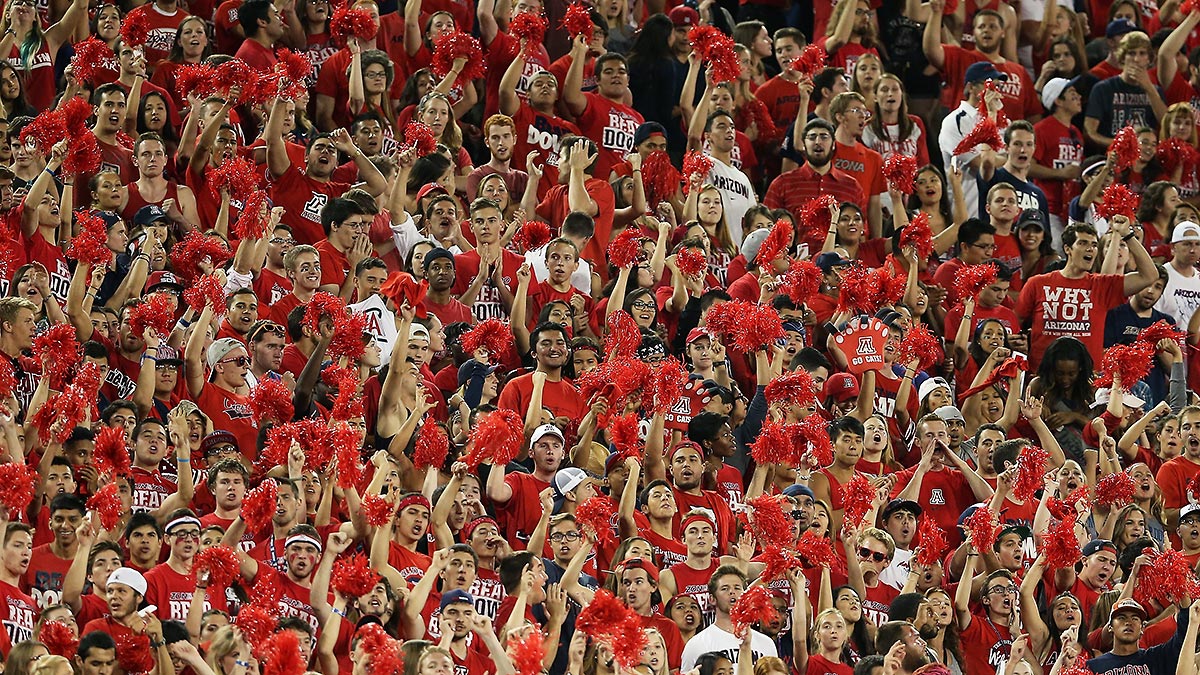 From here, all semblance of breathing room for Arizona in the Pac-12 disappears. With both their bye weeks behind them, the Wildcats must travel to Pullman and Pasadena, host Colorado and Washington at home, head to Utah, and then host the Territorial Cup. Six straight league games, with no open dates, in a conference seemingly hell-bent on auto-cannibalization? “We’re not good enough,” said Rodriguez the day after the USC game, “to play poorly and win.”

Like plenty of other Pac-12 programs, the Wildcats have been bestowed with the occasional miracle this season, but guts and gods can only get them so far. Not that a no. 15 ranking past the season’s midpoint is anything to curl up a lip at; the program’s future looks as sunny as a 10-day Tucson forecast. But the Wildcats’ coaches, like any in their position, would be the first to volunteer this: The best vantage point from which to view a miracle is from a spot where you don’t need one.

NHL Grab Bag: What Would Phil Kessel Do?