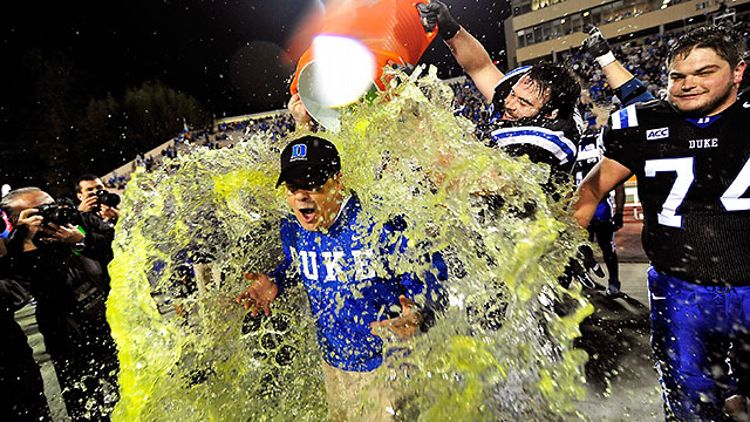 No matter one’s primary rooting allegiance — or interest in basketball — steadfast hatred for Duke hoops is a national pastime. That antipathy has never migrated to the football program, which operates in a sphere that’s neither loathsome, nor enviable, nor pitiable. You can’t summon hostility for a team that hasn’t finished with a winning record in almost 20 years, but you also can’t feel all that sorry for it, because it’s Duke.

This also makes figuring out the program’s personality a tricky bit of business. What do you even know about the Blue Devils off the top of your head? Steve Spurrier’s longstanding affection for them in the coaches’ poll? Rece Davis’s “You don’t just waltz into Wallace Wade” line? All significant sporting outfits evoke instant torrents of images and sound whenever and wherever their names are spoken. Texas: Bevo. Virginia Tech: “Enter Sandman.” Alabama: the eye of Sauron. Our favorite Duke call-up is probably head coach David Cutcliffe’s “Duke football? HELL YES, DUKE FOOTBALL!” speech, but by itself, that’s not a lot to go on.

It’s time to get to know Duke football.

The Blue Devils earned a bowl berth last season for the first time since 1994, and the massively entertaining Belk Bowl was their — and our — reward. There was a 79-yard punt. Something like that doesn’t just happen. In 2013, at 8-2 with three or four games left to play, the Blue Devils are guaranteed to post a winning record — another first since 1994. This season has also seen the first Duke victory over a ranked opponent and first appearance in the AP Top 25 since that ’94 season — Duke is currently no. 25 in the AP and no. 24 in the coaches’ — and it could see the Blue Devils playing for the conference championship. All this while recruiting well outside the limelight. Even the basketball team is less repugnant at the moment; is that just an overabundance of adorability spilling over from the football team and working its magic elsewhere? Probably, right?

Regardless, it’s time to welcome Duke football to the national conversation the best way we know how: with a feelings collage.

Hit play on that speech — the good stuff starts just after the three-minute mark — and scroll through the images below. Let’s navigate this devilishly blue, brave new world together. Hell yes. Duke football.