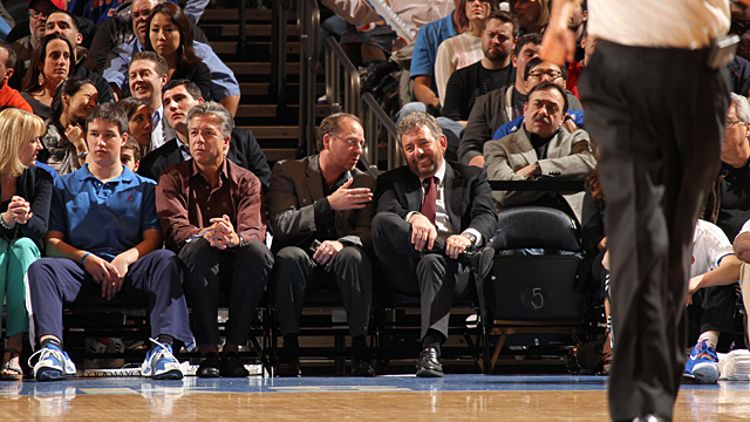 Ever since James L. Dolan — scion of the Cablevision Dolans of Oyster Bay, Long Island — became chairman of the Madison Square Garden Company in 1999, the New York Knicks have been living in interesting times. Unfortunately, that interest has very rarely been generated by the quality of the basketball. The Knicks and their reclusive bluesman of a chairman are known for enforcing one of the most repressive media policies seen outside Pyongyang, and very little on-the-record information ever makes its way out of the mecca’s secretive halls. But that’s why journalism was invented, my friends. Hard-hitting, investigative sports journalism, like that of the award-winning ESPN documentary series 30 for 30. Here are my pitches for Knicks-centric 30 for 30s concentrating on the Dolan era.

What happened: After taking control of the Gold Club in the mid-1990s,* owner Steven Kaplan used the club as a front for an elaborate and luridly flagrant prostitution venture, catering to, among others, high-profile professional athletes. Among those various athletes were three Knicks: John Starks, Larry Johnson, and Patrick Ewing. Ewing’s trial testimony — which the New York Times described as sounding “more weary than embarrassed” — contained explicit descriptions of sexual acts performed on the Knicks center by multiple strippers while in Kaplan’s presence. Which, gross.

Tagline: “What if I told you that you would never think of Patrick Ewing the same again?”

(*Technically the events in the Gold Club case took place before Dolan ascended to the chairmanship. But since the case broke during his tenure, I will allow it.)

What happened: Knicks GM Scott Layden signed Houston — a perfectly fine shooting guard who held career averages of 16.4 points, three rebounds, and two assists, and had been recently embroiled in a scandal in which he asserted the timeless anti-Semitic chestnut of Jewish responsibility for Jesus’s death by quoting Scripture from a Palm Pilot — to a seven-year, $100.4 million deal. Houston was 30 years old, and it remains unclear against whom exactly the Knicks were bidding. “I see a lot of faces that look confused, but for me, this is all smiles,” Houston said at the press conference to announce his extension. He would answer those agog stares by upping his points-per-game average to over 20 for the first time in the next two seasons; then missing 32 games due to injury the season after that; then retiring due to injury. Houston’s contract lived on, though, both as an albatross around the Knicks’ necks and in the “Allan Houston rule,” which allows teams the one-time ability to cut a player and not have that player’s salary affect their cap.

Tagline: “What if I told you a player became the byword for a grievous personnel blunder?”

What happened: Trading away multiple draft picks for overweight cardiac patient Eddy Curry. Signing Jerome James to the midlevel exception on the strength of two playoff series at the age of 29. A jury ruling that Isiah sexually harassed Anucha Browne Sanders, costing Madison Square Garden $11.6 million in damages. The Starbury truck incident. The Larry Brown year. Trading Trevor Ariza and Penny Hardaway’s expiring for Steve Francis when the team already had Stephon Marbury. A disgusted Knicks fan throwing his team hat onto the court as the Knicks lost by 46 to the Celtics in Boston. Isiah’s seemingly Rasputin-like hold over James Dolan’s imagination as evidenced by Dolan awarding Isiah a multiyear contract extension while the team sat at 29-34.

Tagline: “What if I told you to get in the truck?”

Pitch: With Madison Square Garden Reduced to a Pile of Ash, the NBA Forces the Knicks to Hire Donnie Walsh

What Happened: Someone needed to clean up the mess.

Tagline: “What if I told you to hire Donnie Walsh?”

What Happened: After dumbly stumbling into Jeremy Lin, an overlooked young player who showed electrifying on-court potential and saved their season, the Knicks let Lin walk in restricted free agency to the Houston Rockets because: reasons. This even though having Lin on the roster seemed to afford the Knicks near-Zimbabwean money-printing capabilities from the red-hot goldmine in an oil gusher of marketing potential. He is currently averaging 17.6 points, five assists, and 2.6 rebounds with a 19.6 PER, on 61 percent eFg, and 66.5 percent TS.

Tagline: “What if I told you would definitely regret this?”

Freshman Watch: Jabari Parker Is Perfect, and Other Notes From November