College Football Playoff Realpolitik: The Committee Presents Its Top 25, While We Project the Final Top 10 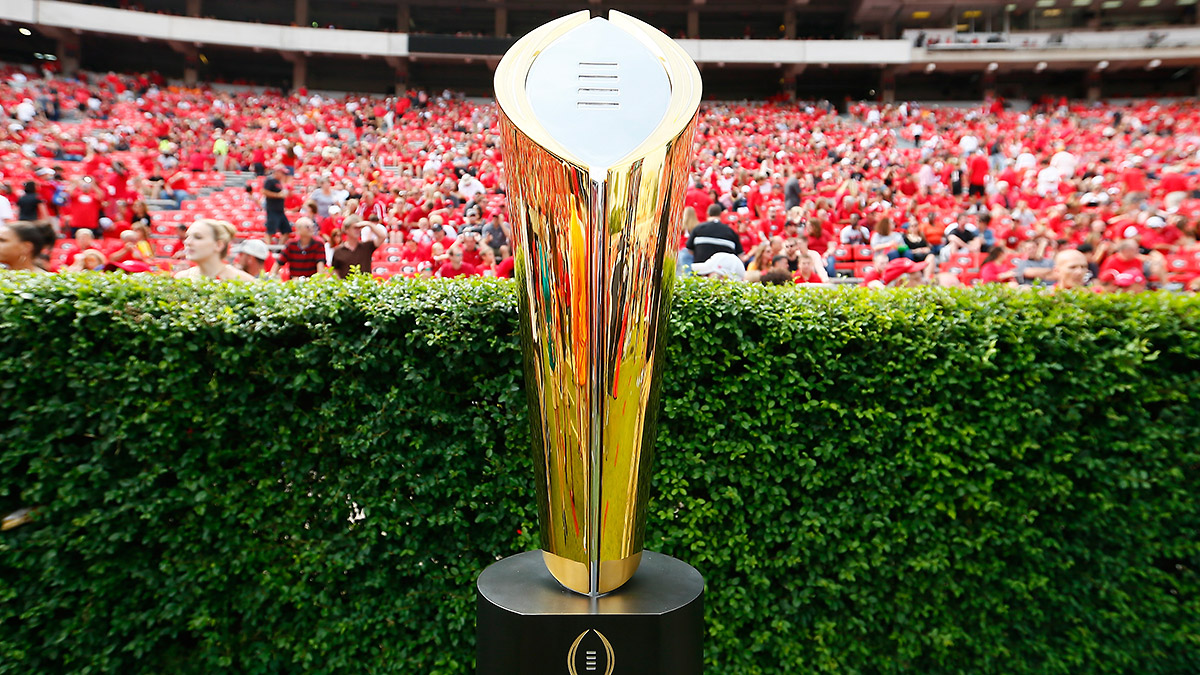 Last night, the 12-person committee1 charged with selecting four teams for the inaugural College Football Playoff released its preliminary poll for 2014, the first ranking under the sport’s new postseason order. What did we learn about how the committee is going to operate and about how its initial effort reshapes the hierarchy for the rest of the season? Here’s what we know after the first round.

Before we go any further, let us stop to marvel at the fact that we’re talking about the imminent practicalities of a goddamn playoff in college football. It took 145 years, but it’s here. It’s happening. We’re doing this. And we’re doing this without computer polls! I’m so excited that I might even make it another year before I start righteously demanding the field’s expansion to eight teams.2

It’s the First One

Don’t get too worked up. For all the hoopla, this week’s ranking amounts to a trial run cooked up by TV execs who know a time-slot winner when they see one. The shadowy, all-powerful forces that control the media aren’t going to like me saying this, but keep in mind that any and all rankings released prior to the definitive edition on December 7 exist strictly for the sake of the broadcast and the attendant hype, not to project the actual composition of the bracket. As committee chairman Jeff Long observed when the weekly, made-for-TV unveiling was announced earlier this year, “I think that’s what fans want.” Your eyeballs on this article are proof that he was right. There are five more Tuesday nights between the first set of rankings and the only set that will matter, and six more Saturdays to render those mileposts irrelevant.

It’s Only a Snapshot

As expected, three SEC West teams made the cut for the top four — no. 1 Mississippi State, no. 3 Auburn, and no. 4 Ole Miss — with Alabama following closely behind at no. 6. (Florida State checked in at no. 2, where it sits in both traditional polls. I guess that’s what we’re calling them now, as opposed to “obsolete polls,” because we respect tradition.) That reflects the division’s ongoing dominance of every other poll in existence, which has certain people in certain other parts of the country genuinely pissed off over perceived “bias,” or something.3

But that will all change soon enough. This weekend’s collision between Auburn and Ole Miss is effectively an elimination game: Barring an insane turn of events down the stretch, the loser will have two losses and be evicted from the national context. Mississippi State has to travel to Alabama on November 15; two weeks later, the divisional round-robin wraps with the Egg Bowl and the Iron Bowl. Based on those four games alone, at least two of the top four teams in the SEC West are guaranteed to finish with multiple losses. On top of that, there’s Alabama’s trip to suddenly feisty LSU on November 8, Auburn’s date with no. 11 Georgia a week later, and the possibility of an upset any week. Hell, it’s still theoretically possible for the SEC West to wind up deadlocked in a five-way tie for first place, a scenario that would require one additional loss by Auburn, Ole Miss, and Alabama, and two by Mississippi State. It’s not even that far-fetched. And then, of course, there’s one last hurdle in the SEC championship game.

All of which is to say, it’s going to take a lot more than a vague sense of Southern superiority to get more than two SEC teams into the field after they’ve finished beating each other into an indistinguishable pulp. The same holds at the top of the Big 12, in the Pac-12 South, and (to a lesser extent) in the Big Ten, where no. 16 Ohio State will travel to no. 8 Michigan State for a de facto elimination game on November 8. Altogether, there are still 20 games to go on the regular-season schedule (not including conference championship games) between teams ranked in this initial Top 25, beginning with Florida State’s trip to no. 25 Louisville on Thursday night. The only team in the top 20 that doesn’t have a remaining game against a Top 25 opponent is no. 15 Nebraska, and given the committee’s stated emphasis on strength of schedule, that might actually hurt the Cornhuskers’ chances more than it helps.

Of the Top 25, my guess is that roughly 20 have a viable shot at the final four if they win all of their remaining games.4 Because so many of those teams are set to face off against each other, though, more than two-thirds of the field will be culled on that basis alone. We just don’t know which two-thirds.

That uncertainty brings us to a segment I’ll call the “Realpolitik Top 10,” which will endeavor to reorganize the pecking order according to each team’s chances of actually making the playoff field in December, regardless of where it happens to sit in the rankings in the meantime. Projections here take future schedules and multiple possible scenarios into account, although with 15 one-loss teams realistically vying for two or three invitations, there’s virtually no scenario that allows for any of them to overcome another loss.

So assuming all of those teams are capable of winning the remainder of their games, this is the long-term hierarchy as of now:

1. The SEC Champion: That is, Alabama, Auburn, Georgia, Mississippi State, or Ole Miss. The “or” in that sequence is important, because although I haven’t the faintest idea which of these five contenders is going to limp out of the scrum with the crown, I do know that said team will ascend directly into the bracket while at least three of the other four will turn their attention to wrapping up their 2015 recruiting classes. The way the rest of the schedule shakes out, I think it’s all or nothing for Georgia and Ole Miss; for Alabama, Auburn, and Mississippi State, making the cut without actually winning the conference is more feasible (see below). But that’s for only one of them, and only if that one finishes with an 11-1 record.

On the off chance that the eventual SEC champion has two losses, though, it’s still going to make the cut.

2. Florida State: There was some minor chatter before Tuesday night’s reveal that the committee might punish the defending champ for its lackluster statistical profile despite its undefeated record. Nope. If FSU wins out through the ACC championship game, it’s in.

4. Oregon: The committee was sufficiently impressed with the Ducks’ wins over Michigan State and UCLA to rank them as the best one-loss team outside of the SEC. The remaining schedule includes Stanford, no. 17 Utah, and (presumably) another ranked opponent in the Pac-12 title game, so there won’t be any excuses for dropping Oregon if it keeps winning.

5. Mississippi State*: The Bulldogs get an asterisk because they’re the only outfit in the poll that I think has built up enough of a résumé to survive a loss in the next six weeks, even if it knocks them out of the driver’s seat in the SEC West. Again, an 11-1 runner-up in that division has an excellent shot of making the cut, although Mississippi State might need a little more help than Bama or Auburn if the Bulldogs fall into that category given that their hypothetical loss would occur later in the season.

6. Notre Dame: The Fighting Irish get a late schedule bump against no. 14 Arizona State, no. 25 Louisville, and USC, by which time some members of the committee might be inclined to chalk up Notre Dame’s last-second loss at Florida State as a moral victory. I’m not saying the Irish are (or would be) more deserving than any of the teams listed below them here, but you think they’re going to get the dry ball if it comes down to an 11-1 lottery?

7. Big 12 Champion: This entry is limited to the current one-loss contenders in the Big 12 — TCU, Kansas State, and Baylor — although I don’t have much faith in any of them actually finishing with one loss in such a volatile league.5 But if one of them does, this is where it will fall in the hierarchy.

8. Pac-12 South Champion: Three Pac-12 South teams — Arizona, Arizona State, and Utah — are ranked in the top 20 with one loss apiece, and they’ve yet to play one another. I can’t really imagine any of them emerging unscathed, but if one of them manages to do it, and then to upset Oregon in the Pac-12 championship game, it will have a compelling case.

9. Michigan State: The Spartans have Ohio State on deck, followed by the winner of the Big Ten’s West Division if they get by the Buckeyes. But the conference’s rep is so damaged right now — even the New York Times has gone out of its way to dis the Big Ten this year — that several more dominoes will still have to fall in front of them.

10. ¯\_(ツ)_/¯: Ohio State, maybe? Nebraska? This is where a two-loss SEC also-ran might fall if another wildfire like the one we saw a couple of weeks back rekindles and rages through the top 10. Frankly, though, at this point on the list we’ve left the realm of rational projection and entered the realm of outright quackery. If you want me to tell you what will happen if all of the above falls through, I’m going to have to start charging by the minute.

The NBA Fan’s Guide to Talking Trash During Pickup Basketball