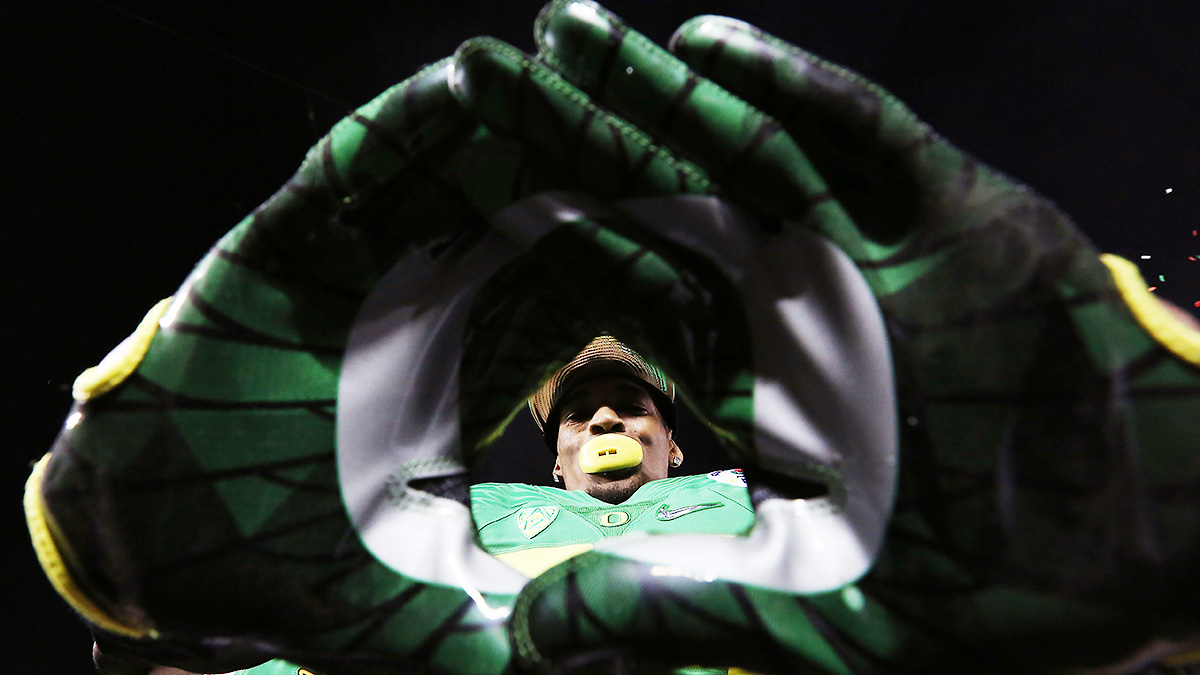 It’s newbie vs. Heisman winner, historic power vs. nouveau riche, Buck vs. Duck. We have no earthly idea what will happen when Oregon and Ohio State face off tonight in the first College Football Playoff National Championship, but that won’t stop us from pretending otherwise by offering up our bold, possibly insane predictions. Most people picked Oregon, but don’t worry: We’re giving Mark Titus the final word.

Matt Hinton: Oregon 45, Ohio State 34. Ohio State is better than Oregon athletically, and Urban Meyer is Patton in a pullover. If Cardale Jones had, I dunno, maybe one more start under his belt, I’d be mighty tempted to break for the Buckeyes. But he still has just the two, the last one less impressive than the first, and he’s going to be lining up opposite one of the most consistent, decorated college quarterbacks of his generation. It’s Marcus Mariota’s time, and it’s Oregon’s time to take the last step.

Holly Anderson: Oregon 43, Ohio State 34. I’m picking Bama, because if anybody can figure out how to pull off yet another national title victory without even having his own team on the field, it’s Nick Saban. (Ugh, fine, if you want to live in the universe we actually occupy: Oregon. I don’t like picks. They do nothing but pass the time, and we ascribe ridiculous levels of importance to them, and — I’m just describing football, aren’t I? But what I’ve really liked about this first playoff field is that right up until the semis kicked off, there were what felt like strong cases for every team. Heading into the title game, it doesn’t feel like there’s any outcome, maybe apart from the Mark Titus one you’re about to read, that would be all that surprising. So here’s one scenario: The Ducks find success early on the ground as Ohio State focuses on attempted maulings of Mariota. Fast scores on both sides, lots of them, but a timely pick of Jones by Erick Dargan makes the difference late. Or not. Whatever. We’re all gonna die someday.)

Bryan Curtis: Oregon 38, Ohio State 21. If Bill Simmons were a college football fan, he’d be applying all sorts of theories to this game. Ohio State is a Nobody Believed in Us Team if I ever saw one. Also a Wonk Team. In the Braxton Miller/J.T. Barrett/Jones QB progression, there’s some intriguing low-level Ewing Theory at work. My theory is that Ohio State is going to get beaten handily by the best QB it’s played all year.

Michael Weinreb: Oregon 49, Ohio State 48. This is as much a wish as a prediction. I hope that this game is high-scoring and furiously weird and occasionally sloppy; I hope it resists control. I hope that Jones plows over several defenders half his size, and I hope that Mariota makes one last awesomely beautiful play before slipping off into the judgmental vortex known, simultaneously, as the NFL and real life. In other words: Since this is the first championship game of a new era, I hope it feels like everything that is great about college football.

Andrew Sharp: Ohio State 38, Oregon 28. We’ve had 11 days to think about this game, and it’s still a complete toss-up. There’s not even an obvious villain to help clarify who the rest of us should pull for. I’m going with Ohio State for a few reasons: because the whole sport gets more fun if the Big Ten wins a title and becomes a credible counterpart to the SEC; because Ohio needs this after what’s happened to the Browns and Cavs the past few months; because I used to own a great, bright yellow Oregon hoodie, but I lost that hoodie; because Mariota is the most boring exciting player we’ve seen in several years; because Jones recently reenacted a Chappelle’s Show skit in real life; because Raekwon McMillan plays for Ohio State, not Oregon; because Meyer quietly has more ridiculous athletes than Oregon, and people will realize this in a crucial moment on Monday night; and, most of all, because Matt Borcas is the future. You’re either with him or against him. Go Bucks.

Brian Phillips: Oregon 66, Ohio State 34. After January 1, I don’t even care about analysis. I just want Oregon’s win over Florida State to burn forever in the eternal flame of a national championship. I am siding with the lasers. I AM SIDING WITH THE LIGHT.

Chris Ryan: Oregon 42, Ohio State 35. I really want to go with the reincarnation of Byron Leftwich, because I love it when guys give themselves nicknames, and “12 Gauge Bags a Duck” is such a great headline waiting to happen. But I don’t really see it. Ohio State will look down and out, fall behind by a few scores, and rally back, but it won’t be enough to stop Mariota. I will also take this Oregon national championship as another sign that Chip Kelly is the Beethoven of football.

Matt Borcas: Ohio State 45, Oregon 31. Much has been made of Oregon’s decision to wear silver and white uniforms in tonight’s national championship game, and rightly so. Those things are garbage. I can forgive electing to don quote-unquote “road” jerseys here — after all, the Ducks pulled them off nicely in the 2011 BCS title game — but failing to incorporate ANY team colors is a bridge too far. Has Oregon suddenly become ashamed of its identity? Did Phil Knight go broke? Are the Ducks full-on embracing their status as shameless avatars of empty consumerism? Whatever the case may be, give me the team with pride, tradition, and Urban Fucking Meyer.

Mallory Rubin: Ohio State 42, Oregon 38. Congratulations, Ducks fans! I’m picking the Buckeyes, which, based on my well-documented tendency to be wrong about everything, all but guarantees that you’ll be toasting your school’s first football championship in a matter of hours. To be clear, I certainly won’t be surprised if Oregon wins. I don’t think Jones will outplay Mariota, I don’t think Oregon’s defense will crumble against an offense similar to the one it practices against every day, and I sure as shit don’t think the Big Ten is better than the Pac-12. But I do think Meyer gives the Buckeyes an edge against the Ducks, or anyone. Right now may feel like Oregon’s time, but doesn’t it always feel like Meyer’s time?

Ryan O’Hanlon: Oregon 45, Ohio State 20. There’s that scene in Napoleon Dynamite — please, don’t leave — when Uncle Rico, with those slinky, nervous arms and leathery weasel face, asks Napoleon, “How much you wanna make a bet I could throw a football over them mountains?” I imagine there’s a similar scene, at some house or dorm room in Columbus, where Jones holds one of his arms out, as if to present the great, flat, corn-fed expanse of the Midwest to whomever it is he’s talking to. “You know, there used to be mountains here,” he says. “Then I threw a football at them.” Could Jones throw a football into the sun? He certainly seems capable of accidentally breaking the JerryTron with an overly strong deep pass to Devin Smith. If that happens, I’m pretty sure the game ends and the Buckeyes are immediately christened national champs; if it doesn’t, Oregon will probably win.

Mark Titus: Ohio State 84, Oregon 0. Oregon attempts a field goal with 1:17 left in the game to avoid the shutout. Ohio State blocks the kick and runs it back for its 12th touchdown. Knight is so embarrassed that he cuts ties with the Ducks. Oregon then becomes a Fila school. An ashamed Mariota quits football forever. The number of babies in Ohio named “Cardale” skyrockets. Ignoring the new playoff system, Alabama declares itself the national champion anyway, citing its “strength of schedule” and “body of work.” Pollsters agree. The dynasty continues as Bama wins its fourth title in six years. Roll Tide.