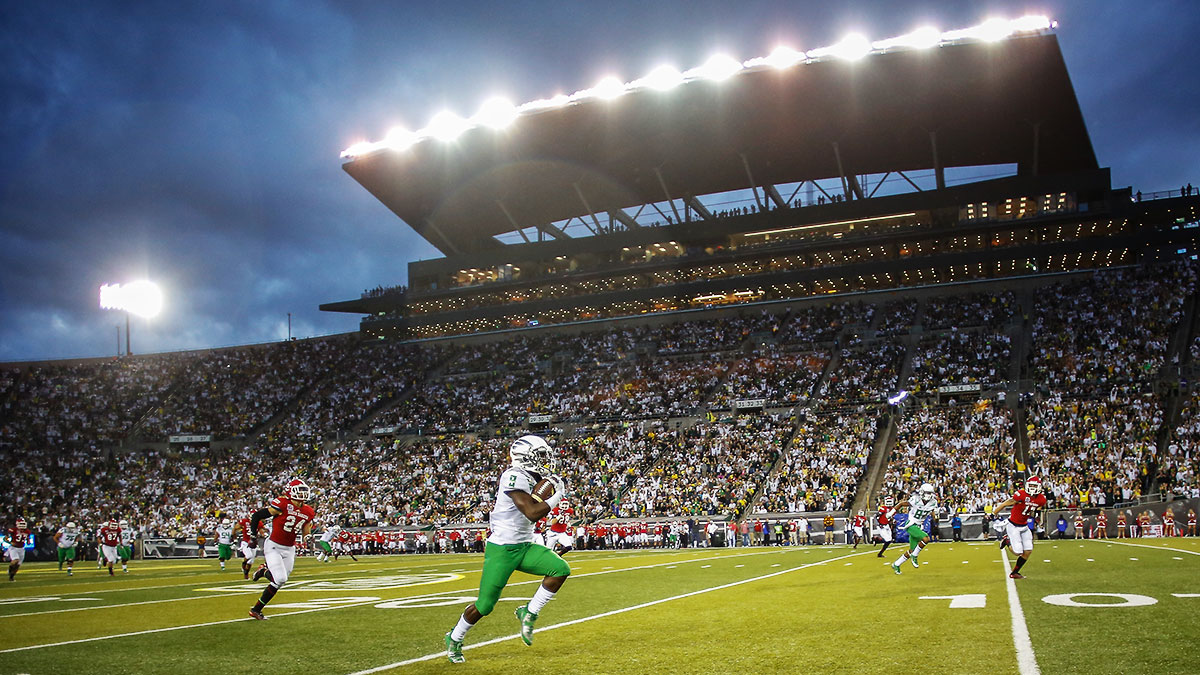 Week 2 is a woolly one, even for September: Studded with a couple sure things (Michigan State and Oregon, we are so thankful for your scheduling tendencies right now, say amen), thickly laced with odd couples (Duke and Troy, we see you), and full to bursting with teams looking for a sure win and pairing off with the first squad that says yes to a fluffy check (how-di-do, powerhouse programs to be named later), this college football slate is that one mixer early in the semester we’ll all spend three days sleeping off and about which we’ll make a grimly unsanitary blood pact in the woods never to be spoken of again. Are you really all that grateful the season’s back? After this weekend, you’ll know in your heart for sure. 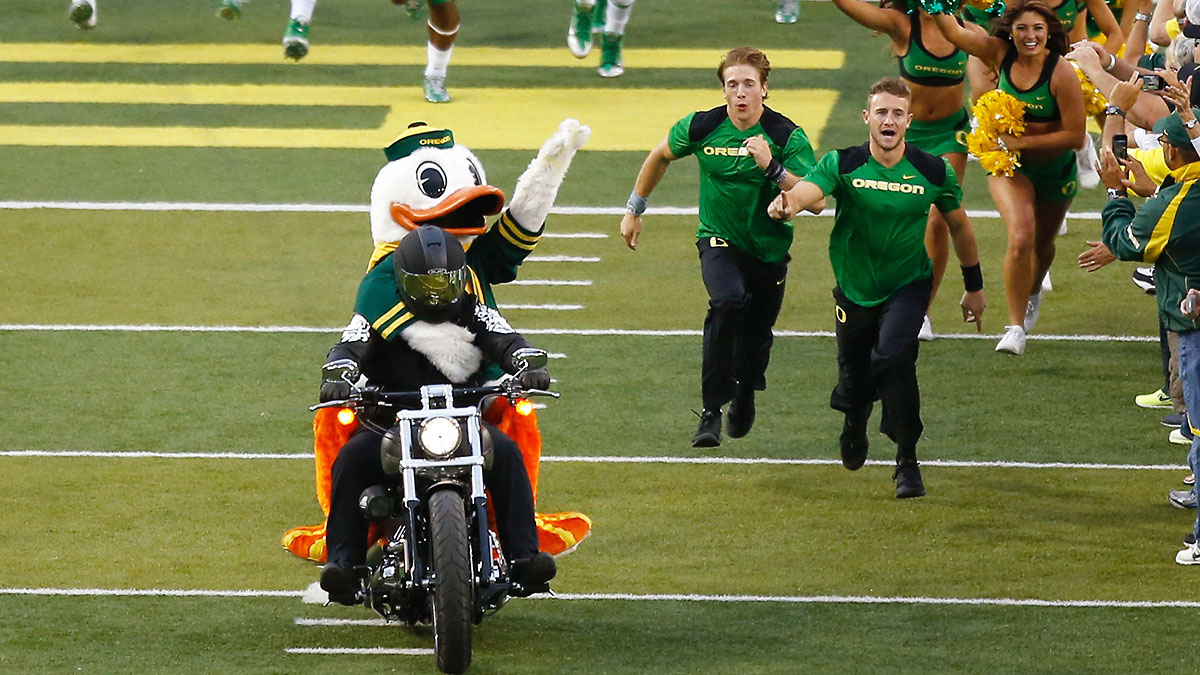 How to watch: Hike over to Eugene by Saturday, or catch the broadcast at 6:30 p.m. on Fox. GameDay’s also at Autzen this week, if you’re into increasingly adorable and elaborate plush Duck photo ops.

Story line: Oregon’s famous offense, you maybe already know. Michigan State’s defense, you might not, even after the Spartans’ 2013 crusade that culminated in a Rose Bowl victory. Familiarize yourselves with the help of one Chris B. Brown.

How to watch: Follow the clouds of meat smoke to Stanford Stadium in Stanford, California (Stanford is too busy turning out world leaders to get all evocative with naming things), or tune in to ABC at 3:30 p.m. (Coverage also available on ESPN3.)

The game: Michigan at no. 16 Notre Dame

How to watch: Find your seat in a decorous fashion under the watchful eye of Touchdown Jesus, or flip to NBC at the almost racy hour of 7:30 p.m.

Story line: It’s the final scheduled meeting in this rivalry, so treasure it: You will not see the likes of this majestic orchestra of jangling keys again, in this life or the next.

The game: Virginia Tech at no. 8 Ohio State

How to watch: This is the prime-time ESPN game, scheduled to kick off at 8 p.m. with coverage also available on WatchESPN. If you’re headed to Columbus yourself, don’t forget to take into account Hokie fans’ genetically enhanced night-vision capabilities before starting any fights.

Story line: Last week’s OSU-Navy game was a highlight of the season openers; this week pits elevated Braxton Miller backup J.T. Barrett against Texas Tech import Michael Brewer in a duel of new quarterbacks. (Sort of? If we as a society are going to call them “quarterback duels,” we should at least allow the players in question to carry swords.) 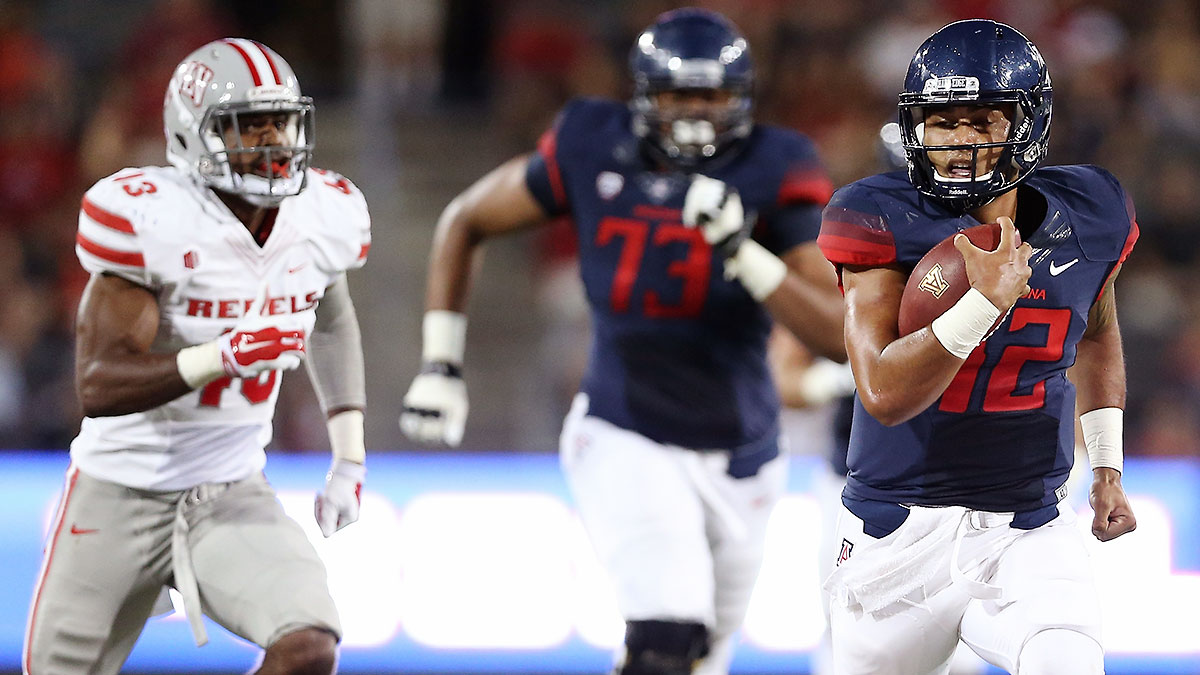 Arizona at UTSA (Thursday, 8 p.m, FOXS1). This game has everything we want out of a weeknight contest. Two programs powering up ahead of schedule on their respective timelines! A fresh-faced young leader of men! Cartoon birds! Larry Coker!

Pitt at Boston College (Friday, 7 p.m., ESPN/WatchESPN). His name is spelled differently, but we can’t stop wondering if the Panthers’ new quarterback is related, however distantly, to the Soldier Bear. Can we make this a thing? There are worse nicknames to grow into.

Washington State at Nevada (Friday, 10:30 p.m., ESPN/WatchESPN). It’s dog versus cat, red versus blue, and points versus not-points: The Cougars lost their last game 41-38; the Wolf Pack won theirs 28-19. 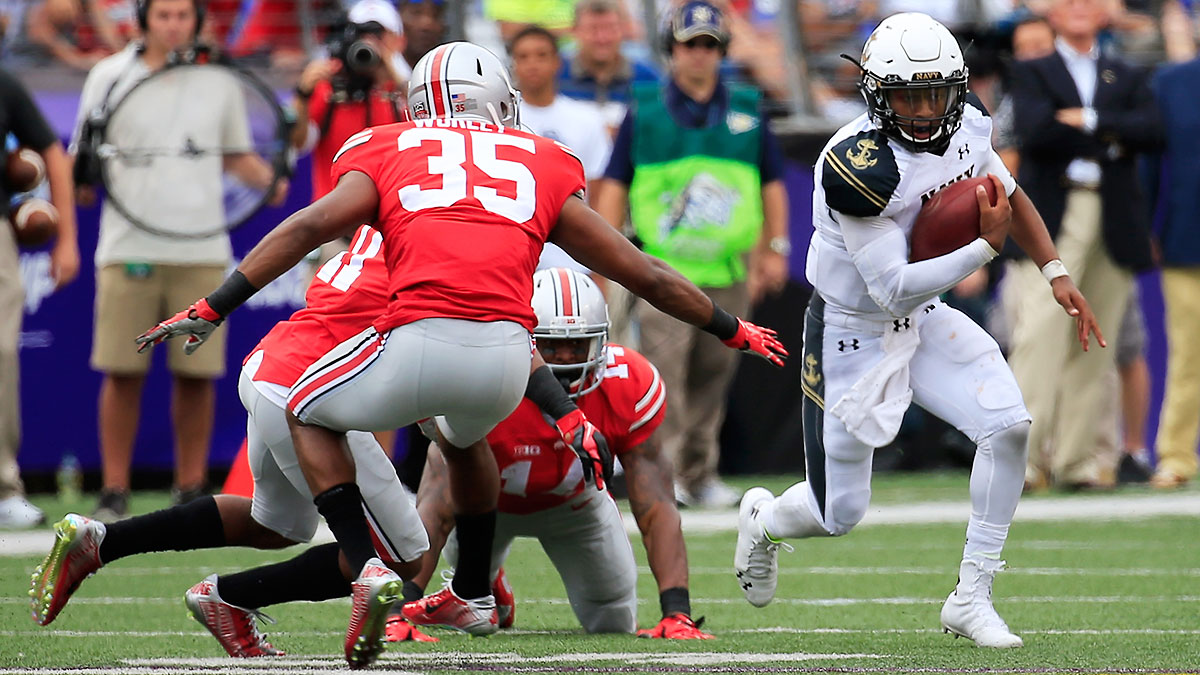 Highlights from a wacky Week 2 undercard.

Navy at Temple (Saturday, 1 p.m., ESPN3). After seeing the Owls drub Vanderbilt and the Mids hang with Ohio State in Week 1, we’re keeping at least one screen on Philly, and not just to stage an imaginary owl-versus–anchor print twee-off.

East Carolina at no. 21 South Carolina (Saturday, 7 p.m., ESPNU). Coming off that nastily high-profile defeat to negotiation enthusiast Kevin Sumlin, the most Spurrier thing to do here would be to shut down Pirates QB Shane Carden’s offense, shut all of us up about East Carolina as the Power Five spoiler program of 2014, and play a smug 36 holes on Sunday. Unless he doesn’t!

BYU at Texas (Saturday, 7:30 p.m., FOXS1). This looked a lot more like a football game before Texas lost its starting quarterback, starting center, and two offensive tackles in the span of a week. And what’s it like in Taysom Hill’s headspace right now, wondering how to live up to the time he ran for 259 yards against the Longhorns?

Western Kentucky at Illinois (Saturday, noon, BTN). You there, boy! Did you enjoy watching WKU hang 702 yards of offense on the team picked to win the MAC? Would you like to see the Hilltoppers try that sort of cheekiness against an Illini team that just gave up 380 yards to Youngstown State? Run to the butcher on a corner, buy that turkey that’s twice as big as you, consume it, and carve a throne from its carcass to rest upon as you gaze at your will made worldly. 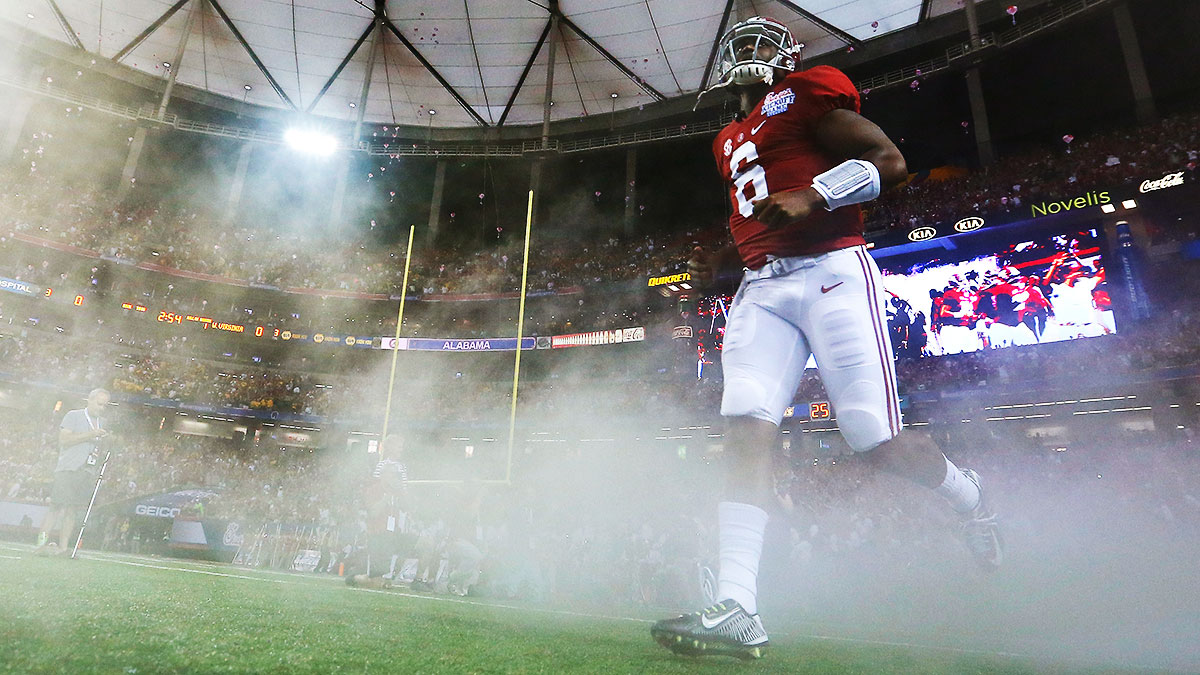 Where in the hell have the rest of the top five gone off to? No. 1 Florida State, no. 2 Alabama, no. 4 Oklahoma, and no. 5 Auburn were last seen heading up to makeout point1 with, in order, the Citadel, Florida Atlantic, Tulsa, and San Jose State.

Where can I see a cross-subdivisional game that has a chance of getting interesting? Washington had the misfortune of starting the season with a trip to Hawaii, and while “mis” might seem like an odd prefix to pair with “fortune” when it comes to “trips to Hawaii,” the Warriors play hard at home and the Huskies didn’t look great. The Huskies are adjusting to life under a new head coach while also switching back to starting quarterback Cyler Miles, who’s returning from a suspension this week. All of this makes the Huskies’ quality difficult to pin down right this minute, so keep one eye in Seattle2 as the Huskies host Eastern Washington. (Saturday, 3:05 p.m., P12N)

How many adorable wintry-looking dogs will be on hand for Northern Illinois–Northwestern? Both NIU’s new mascot, Mission, and its just-retired mascot, Diesel, will grace a grateful nation with their cooling gazes:

YES!! Happy to report that both Diesel AND Mission will be at Saturday's NIU-NU game. Diesel back by special request. #CatsnDogs @TCMcG

No. 24 Missouri at Toledo: What? For the whippersnappers: Mizzou plays an MAC team on just about an annual basis, though not usually on the road. Toledo’s special, though: Before taking over the Tigers, Gary Pinkel coached the Rockets. (Saturday, noon, ESPN/WatchESPN)

Where’s my late game? Even Hawaii, which hosts Oregon State at 10:30 p.m. in Honolulu (CBSSN), gets beat out this week by one of the game’s finest engines of chaos: the after-dark UTEP game, this time featuring Texas Tech (11 p.m., FOXS1). Even with pickax-wielding coach Mike Price no longer in the picture, we rate this week’s Miners–Red Raiders tilt as not to be missed. Because you just never know.3

Here’s the thing: While we recognize that Tim Miles is right to correct these people, and while his job certainly must occupy a great deal of his time, we hope he gives them one chance and only one chance to change their behavior before he suddenly starts accepting their electronic overtures and blithely wading into conversations. They want your opinion, man. Give it to them. You share a surname with the only coach in America who could begin contradicting himself from three states away without anybody batting an eye. Classic Les.