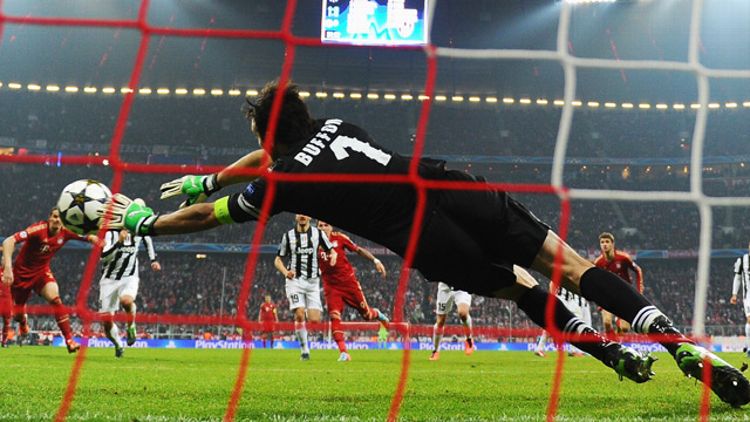 We have reached the wonderful part of the UEFA Champions League where a truly elite team can be a heavy underdog. Juventus has dominated Serie A this season after cutting through it unbeaten last season. They lead their domestic league in goals scored and goals allowed. They have one of the best keepers in the world (still) in Gianluigi Buffon, and one of the stoutest spines in club football. Andrea Pirlo has spent the last two years proving AC Milan wrong for both club and country. They have history, experience, one of the world’s largest supporters groups. They are without a doubt one of the top five clubs in the world both today, and historically. And they’re in a lot of trouble.

How did Juventus get here?

Juventus reemerged from a half-decade of scandal last season, making an undefeated run through Serie A to secure their first Scudetto since 2003 (and Reggie Bush never won the Heisman, let’s move on). The Old Lady then got to this point in the tournament by making an undefeated charge through a tricky group that included Shakhtar Donetsk and defending champion Chelsea. Juventus then got very lucky, drawing a relatively weak Celtic side, whom they dispatched with ease 5-0 on aggregate. Juventus then got relatively unlucky, drawing a very good Bayern Munich side, who quickly scored against the Italians, before adding a second-half goal to secure a 2-0 first-leg victory.

How does Juventus play?

Juventus plays in manager Antonio Conte’s preferred 3-5-2 with wingbacks Stephan Lichtsteiner and Federico Peluso providing width and delivery to two forwards playing up front. Aside from those two, Juventus plays very narrowly. Attacking impetus comes from Juve’s central midfielders Arturo Vidal, Claudio Marchisio, and Pirlo. The interplay of these three is meant to open up space in the center of the pitch, and allow for forwards to release behind the defense. For this to happen though, Juve needs time on the ball. This makes Bayern an awful matchup for the Italians.

Why is Juventus an underdog?

Even without Javi Martinez (who missed the first leg through yellow-card accumulation), Bayern throws out one of the best double pivots in football with Bastian Schweinsteiger and Luiz Gustavo. And those two dominated the first leg, pressing hard when Juventus was in possession and passing accurately (67/70 for Schweinsteiger, 48/51 for Gustavo) when they had the ball. Combined with the pressing of Bayern striker Mario Mandzukic and central attacking midfielders Toni Kroos and, after Kroos’s tragic groin injury, Thomas Muller, there just weren’t enough good chances coming from the center of the pitch. Pirlo was rendered ineffective (26/37 passing including only 2/9 in the attacking third), Vidal had a poor overall showing, and the lack of the linking midfield presence that Paul Pogba might have provided meant that Juventus was forced to fire off a series of speculative shots. At Manuel Neuer. This, unsurprisingly, didn’t work.

Meanwhile, things were ugly for the Italians on the outside. Bayern’s initial goal was scored by fullback David Alaba on a somewhat fluky deflection. That said, it wasn’t a fluke that Bayern was able to get a fullback in an attacking position with acres of space; Alaba and right back Philipp Lahm were able to do so all match. Combined with the play of Franck Ribery, and after Kroos’s injury, Arjen Robben, Bayern created a number of excellent chances in the first leg because of the tactical advantage the 4-2-3-1 that the Germans play provides. Not only were the wingbacks for Juventus pinned back by Bayern’s attack, but the lack of any other wide attacking options meant Bayern could bring Alaba and Lahm into the attack without fear of an attack coming into the space behind them. The only disadvantage this left for Bayern was a lack of guaranteed numbers in the middle; their center backs were left two-on-two against Juve’s forwards. That said, with Bayern’s midfield pressing, the delivery to those forwards was nonexistent.

What can change for the Italians is the introduction of Pogba. The former Manchester United midfielder can sit in front of Juventus’s midfield trio and provide a creative spark that was missing in the first leg. However, Pogba’s introduction alone will likely not be sufficient to turn the tie. Conte doesn’t have an answer for Bayern’s pace and skill on the outside, and with the reintroduction of Martinez in the next leg, Bayern will be only more stout in the middle of the pitch.

Who is the man to watch for Juventus?

Despite a tactical advantage, Bayern does not have this tie won. In order for things to change in Turin, though, Juventus will need to be ruthless in their finishing. Fortunately, getting back a full-strength Mirko Vucinic will give the Italians the finisher they need if they are to pull off a comeback. Because of illness, Conte was forced to start a second-choice pairing of attackers in Alessandro Matri and Fabio Quagliarella. The star of the Montenegro National Team that has tormented England of late, Vucinic has been a critical cog for Juventus since coming over from Roma in 2011. Also, and as importantly, Vucinic celebrated his penalty against Pescara by taking his pants off and waving them over his head. That was enough for me to overlook how wasteful Juventus was against relegation fodder in their last match, firing 31 shots before getting the penalty breakthrough.

What is a likely result on Wednesday?

A 1-1 tie and Bayern takes it on a 3-1 aggregate. There is no reason to believe Conte has the weapons at his disposal to neutralize this Munich side. Even without Kroos available, Munich is well set up to challenge the Italians with Muller in his preferred central position. If Conte introduces Pogba into the lineup, he will add a new element for Bayern to deal with. There is just no reason to believe they are not set up to deal with anything thrown at them at this point.

In fact, the only strike against Bayern Munich remains their failure in recent knockout competitions. While Bayern is in line for a treble this season, this is much the same team that lost the Champions League final to an inferior Chelsea side last year. Bayern and Juventus also represent the hearts of the sides that faced off in the Euro 2012 semifinal, a match in which Italy stunned the Germans. History is powerful in soccer, but it’s not as powerful as talent and tactics, and despite Juventus’s quality, Munich currently has more.

Derek Jeter's Diary: Pottery Is No Substitute for Baseball

Loss of Damaged Weaver Could Be an Angel Blessing