Loss of Damaged Weaver Could Be an Angel Blessing 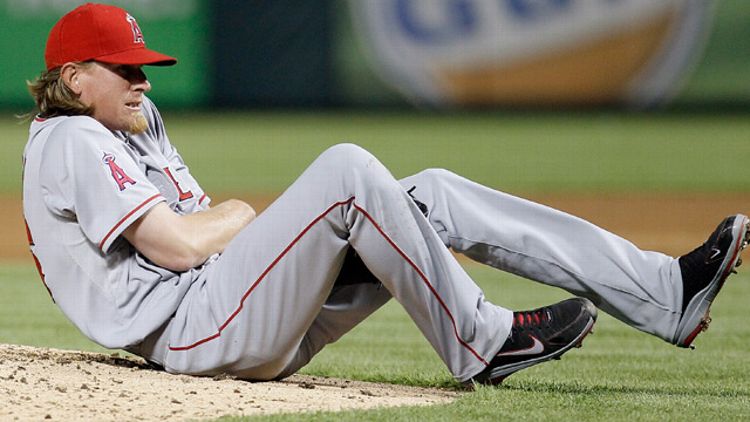 Jered Weaver will miss four to six weeks with a fracture in his left elbow. This could be great news for the Los Angeles Angels.

To understand how losing someone considered one of the best pitchers in the game could be a good thing for a pennant contender, we need to start with this: Jered Weaver wasn’t pitching like himself even before the injury. In fact, he’s been throwing off red flags since last season.

This might seem insane to ponder, given the lanky righty’s end-of-year stats. In 2012, Weaver went 20-5, posted a 2.81 ERA, made his third straight All-Star Game, and finished third in Cy Young voting. But there were broader signs of skills erosion at work. Weaver’s strikeout percentage dipped to 19.2 percent, the second-lowest mark of his career (his 6.8 strikeouts per nine innings were also the second-lowest total of his career, and also below league average for a starting pitcher). His 8.6 percent home-run-per-fly-ball rate was his worst in his seven big league seasons. Beyond those numbers, you could see a difference in the quality of his pitches. Weaver’s average fastball dropped to 87.8 mph, the lowest mark of his career and the kind of speed that will punt most other right-handed starters out of baseball, never mind trying to maintain elite performance with such soft offerings.

There were health problems, too. In his final start of 2012, against the Mariners, Weaver exited after just one inning. “You know what? My body just kind of shut down,” he said after the game. “I felt it in the bullpen. My shoulder wasn’t feeling up to par. I wanted to give it a go, but I didn’t want to push it and have something bad happen and go into the offseason worried. The best thing to do was shut it down.”

A prudent stance, given the Angels weren’t going to the playoffs and Weaver didn’t have anything to pitch for, beyond some potential stat-padding. But to grasp the scope of his injury issues, we need to go back to his start on May 28 of last year. That day, Weaver failed to record a single out, leaving three batters in. Turned out he had back problems, which shoved him to the disabled list for more than three weeks. When he returned, he looked great — not just great, but borderline unhittable. In his four starts following his DL stint, Weaver went 4-0 with a 0.33 ERA, holding opposing hitters to a microscopic line of .168/.233/.189.

Then, something happened. Traditionally stingy with the long ball, Weaver allowed 15 homers in his final 15 starts of the year (including that one-inning start to end the season). That scared me back in November, and led to more skepticism this spring.

On Monday, FanGraphs’s Dave Cameron chronicled Weaver’s 2012 second-half swoon in detail, including the sudden drop in velocity that led to 87-mph meatballs getting pounded into the bleachers at an alarming rate. Counting that final start of 2012, Weaver’s average fastball velocity has plunged below 86 mph. Using 2012 numbers, only three pitchers of the 88 with enough innings to qualify for the ERA title threw softer “heaters”: notorious junkballers Mark Buehrle and Barry Zito, and R.A. Dickey. We shouldn’t make too much out of two or three starts in which a pitcher gives up a bunch of runs. But as Bill Petti’s research demonstrates, a sudden, sharp drop in velocity like Weaver’s can portend bigger problems ahead.

Weaver’s injury is to his non-throwing elbow. Thus he’ll have the time and ability to work on his throwing arm while he sits. No one — not Weaver, trainers, doctors, and certainly not smart-aleck baseball writers — can know for sure if Weaver’s right arm will recuperate while he’s on the DL. We can’t know if strenuous exercise, or even just rest, will help him get back to where he once was.

But the status quo wasn’t working. Even in a park as friendly to pitchers as Angel Stadium, with a killer defense led by Mike Trout and Peter Bourjos tailor-made for a fly ball pitcher like Weaver, the results going back to last summer were slipping. Weaver spending a month-plus on the sidelines might help the Angels get their ace back, in all his former glory. That alone is reason for some optimism.

Even if we assume that the Angels are losing a Cy Young–caliber pitcher for the next four to six weeks and not the diminished arm we’ve seen since last July (unlikely, but stay with me), the downgrade from Weaver to likely replacement Garrett Richards over five to seven starts or so wouldn’t figure to be all that big anyway. Even at his best, Weaver was about a six-win pitcher. Subbing in a generic space-filler in his stead for a few weeks wouldn’t inflict major damage on the Angels.

In Richards, the Angels will trot out someone who could be better than that. Considered the organization’s top pitching prospect after a strong 2011 season at Double-A Arkansas, Richards saw his numbers dip last year in the high-offense Pacific Coast League. Then he struggled with command while pitching as a swingman for the Angels. But he’s still just 24 years old, with a mid-90s fastball and a power slider that have both been graded as plus pitches. This could be his first extended trial as a starter in the big leagues, and we very well might see some decent results.

At the very least, there’s a good chance that Richards will prove a better option than what the Angels already have at the bottom of the rotation … because this team lacked quality pitching even before Weaver’s elbow gave out.

Joe Blanton has ranked among the league leaders in strikeout-to-walk rate for the past few years. But he also lacks overwhelming stuff, which we’ve seen in his elevated hit rates, and especially in his sky-high home run rates. In Blanton’s first start this season, the Reds tagged him for three homers in five innings in an interleague matchup; that was the kind of outing we very well might see throughout the year in the higher-offense environment of the American League. No. 5 starter Tommy Hanson was once considered an all-world pitching prospect, but he’s battled injuries and general ineffectiveness over the past two seasons and is no lock to hold up over a full year. The most reliable of the back-three Angels starters is probably Jason Vargas, who perennially owns one of the league’s lowest strikeout rates and whose upside could best be described as painfully average.

Overall, the Angels should remain in decent shape for now. They have a loaded offense that’s underachieved to start the season, with a .119 batting average with runners in scoring position (through Monday) that will, of course, rise dramatically in the coming weeks. Mike Trout, Albert Pujols, Josh Hamilton, and friends were going to need to do the heaviest lifting for the Halos to win this year anyway.

But if the staff ace’s injury serves as a wake-up call to management to replace mediocre starters with a Zack Greinke–style acquisition or two in a couple of months, this whole thing could turn out to be a plus for the Angels. If they also get the old Jered Weaver back in four to six weeks, it would become a huge, huge win.

Your Guide to the Last 18 Days of the NHL Schedule