Crowning the Most Exciting Team of the 2015 MLB Regular Season 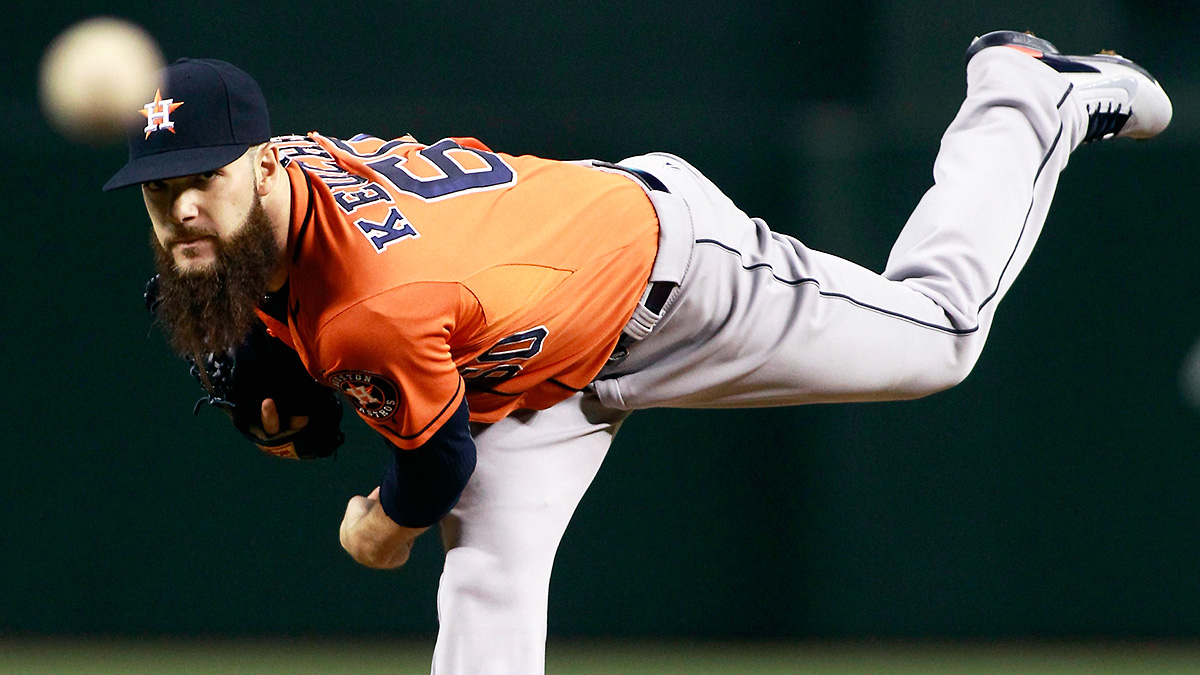 If you flip back and forth between baseball’s standings today — finally still, after six months in motion — and the standings from last Friday, it might seem as if the regular season’s last weekend was a waste of time. The teams that made the playoffs are the same ones that held playoff positions three days or even one week ago: Despite some threats to the contrary, there were no buzzer-beating comebacks or epic collapses. Neither the Twins nor the Angels pulled off an upset; the Astros clung, white-knuckled, to the second wild-card spot, and the Rangers maintained their division lead. The only real developments had to do with home field: The Royals pulled out of a tie with the Blue Jays for the AL’s best record to claim home field for as long as they’re alive; ditto the Dodgers, who moved ahead of the Mets to lighten Vin Scully’s travel load through the NLDS.

Yet the weekend was almost a 2011-level success, as eventful as an ultimately inconsequential ending could’ve been. On Saturday, Max Scherzer made one of the most dominant starts ever seen, recording his second no-hitter of 2015 while striking out 17 Mets. His opponent, Mets starter Matt Harvey, teamed up with three New York relievers to whiff 18 Nationals, giving the two teams 35 K’s on the day and breaking the previous nine-inning record by four. Chris Sale threw a 97 mph fastball and a 50 mph eephus back-to-back, which should probably be outlawed in the next CBA. Ichiro got the gift the Mariners and Yankees wouldn’t give him, making his major league pitching debut and flashing some serious secondary stuff for the Marlins.1

Clayton Kershaw reached 300 strikeouts. Zack Greinke lowered his ERA to 1.66. Jake Arrieta, as has become his custom, allowed zero runs. Shelby Miller won a start for the first time since May 17. The Pirates kept Joey Votto off the bases for an entire game, which — even more improbably — the Reds won. Alex Rodriguez showed us his champagne face. (OK, that was Thursday. I’m cheating a little, in honor of A-Rod.) The Energizer Buehrle sadly stopped beating, making it only two outs into a start on one day’s rest that he hoped would extend his 14-season 200-inning streak. He reportedly retired with an additional eight unearned runs on his record. And Torii Hunter guaranteed a Twins World Series title in 2016, ruining next season for everyone. (Spoilers, dude. I was planning to watch that.)

And then there was the Rangers-Angels madness on Saturday, when Josh Hamilton’s two-homer revenge on Arte Moreno nearly ended Anaheim’s season until David Freese gave Rangers fans flashbacks to 2011. Entering the top of the ninth with a 10-6 lead, Texas’s win expectancy was as high as human body temperature. But the Rangers’ overworked bullpen belched smoke as manager Jeff Banister asked Sam Dyson and Shawn Tolleson to make two of the four outings this season in which a reliever pitched for a fifth straight day, and the Angels strung together seven hits and five runs. That game kept the AL West and AL wild-card races undecided for another day, giving us a chance for something even more special on Sunday; and thanks to a prescient scheduling decision made last spring (which was a hit with everyone except Joe Girardi), every meaningful game started almost simultaneously in mid-afternoon ET, making me and many others opt for a three-screen experience.

We can use those playoff odds to determine which team had MLB’s most exciting regular season in 2015. Every day during the lead-up to October, BP simulates the rest of the season thousands of times, calculating each team’s odds of winning a wild card or division title, advancing to the division series, and winning a World Series based on its depth chart, remaining schedule, and PECOTA-projected player performance. If a team loses a game or suffers an injury, its odds go down, particularly if its rivals win or add reinforcements. On good days, a team’s odds go up. If we add up the absolute values of the team’s odds changes from one day to the next, we get its cumulative movement for the year. Higher totals correspond to more exciting seasons.

We can walk through this process with the obvious pick for the least exciting team of 2015, the Philadelphia Phillies. On Opening Day, PECOTA gave the Phillies a 1.6 percent chance to make the playoffs. By June 12, they’d totally flatlined. Combine the absolute values of every up and down for the Phillies’ odds in the 182 days since the opener, and you get 11.1 percent, just slightly more than the Astros and Angels moved on the last day of the season alone. The stats confirm what we already know: The Phillies’ season was extremely non-suspenseful, yielding a total almost five times lower than the next-closest team’s.

When I went through this exercise last year to find the team at the other end of the excitement spectrum, the stats said that the Mariners, who were eliminated on the last day of the 2014 schedule, had enjoyed the most exciting regular season, even though they’d fallen just short of a playoff spot. If we bring back the same method in 2015, we get a similar answer: the Angels, who, like the 2014 Mariners, finished third in the AL West, one game behind a division rival that won the second wild card. 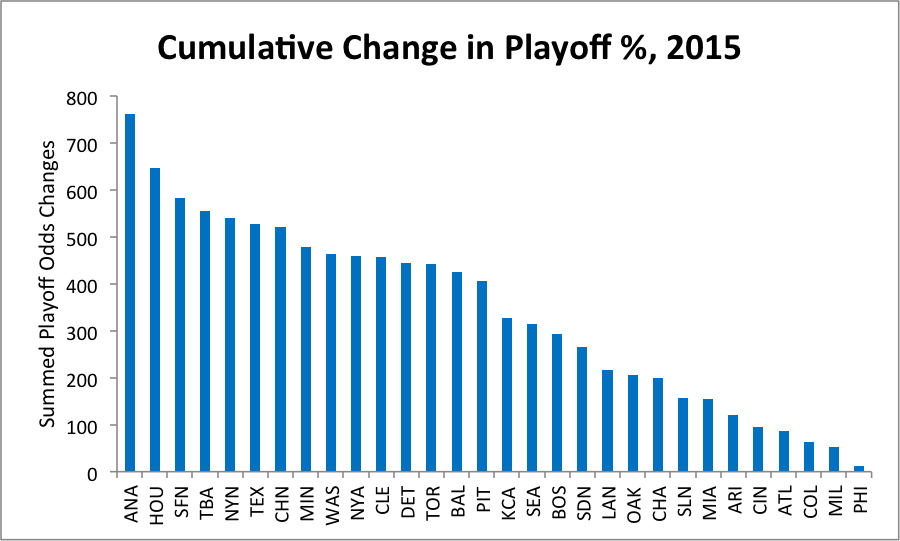 A few other competitive non-playoff teams are close to the top: the Giants, the Rays, and the Twins. The Cardinals, MLB’s 100-game winners, rank eighth-lowest: They started with 66.7 percent playoff odds, inched toward 99 percent on July 12, and hit 100 on August 23, so it’s been months since there was much doubt that they’d be playing this week.

But there was some doubt about when and where the Cardinals would play, and that’s the nuance that the old method ignores: the distinction between a team’s odds of winning its division and its odds of winning a wild card, which is worth about 50 percent of a division title (the odds of winning the one-game play-in to qualify for the division series). We don’t want to focus on division odds exclusively, but we definitely don’t want to weight wild-card movement the same. The solution is to weight it by what it’s actually worth. Here’s what we get when we count movement in division-title odds twice as much as shifts in wild-card odds: 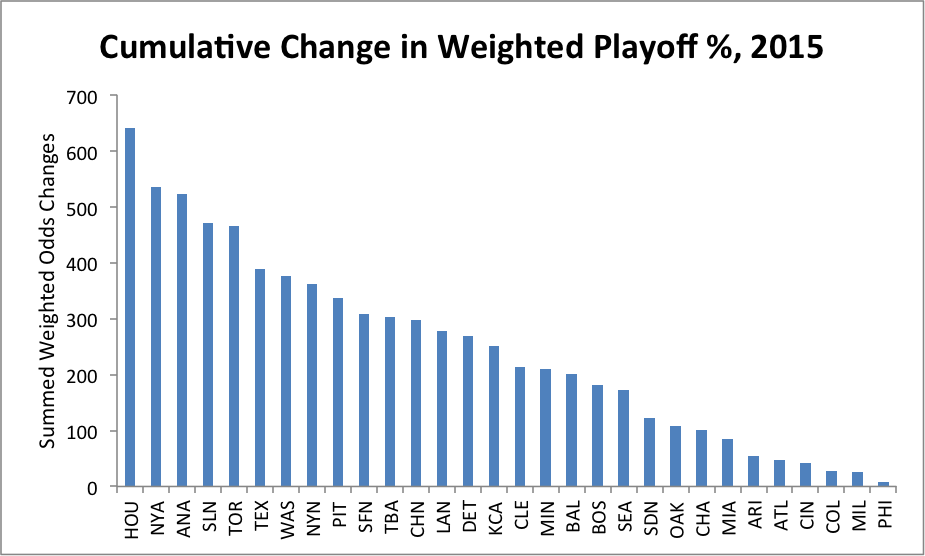 Now the Cardinals move up to fourth, a reflection of how close the Pirates and Cubs came to catching up in the Central. The lowest-ranking playoff team is the Royals, who ran away with the AL Central and come in 16th in the excitement hierarchy. And the new most exciting team is the one that was the least exciting in 2014, one that came out of nowhere to lead the AL West for much of the year before slumping in September to fall out of first and just managing to fend off the Angels this weekend to avoid a complete collapse: the Houston Astros, the lowest-payroll member of 2015’s most exciting division, the AL West. 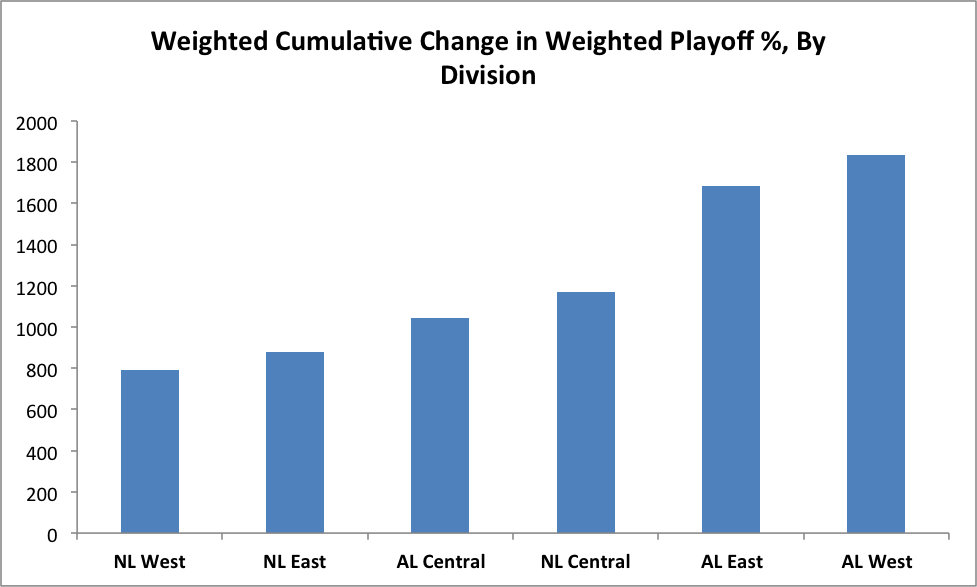 PECOTA’s Opening Day projections gave the Astros only a 14.9 percent chance to make the playoffs. They fought their way from the teens to the mid-50s by early May, then the mid-60s by early June, then the mid-80s by early July, and then the mid-90s by early August, after they’d acquired Carlos Gomez and Scott Kazmir before the trade deadline. But they bottomed out at 60 percent during their slump (and Anaheim’s hot streak) last month, giving them 40 percent more to make up by the end of the year. 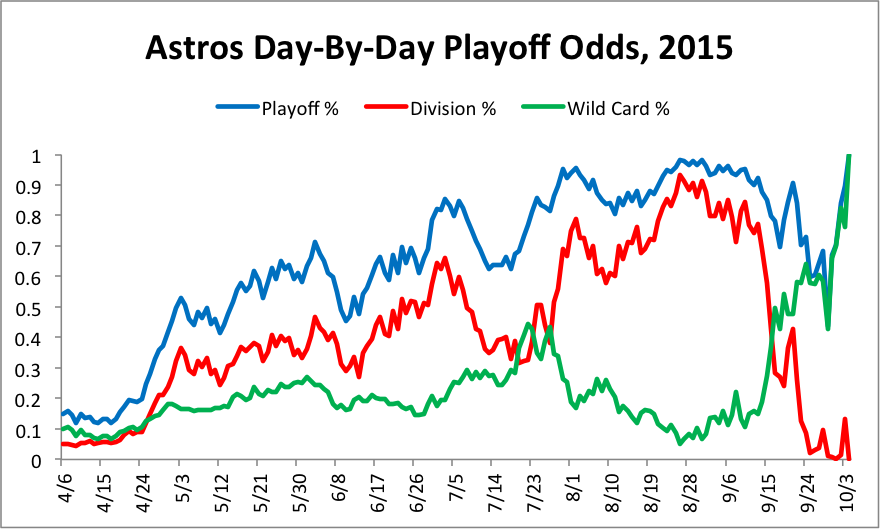 If we divide the season into 18 spans of nine games and sum the absolute value of playoff-odds changes within each small sample, we see that while the typical team saw less fluctuation in its playoff outlook as the season wound down, the Astros’ uncertainty spiked in the last few weeks of the season. 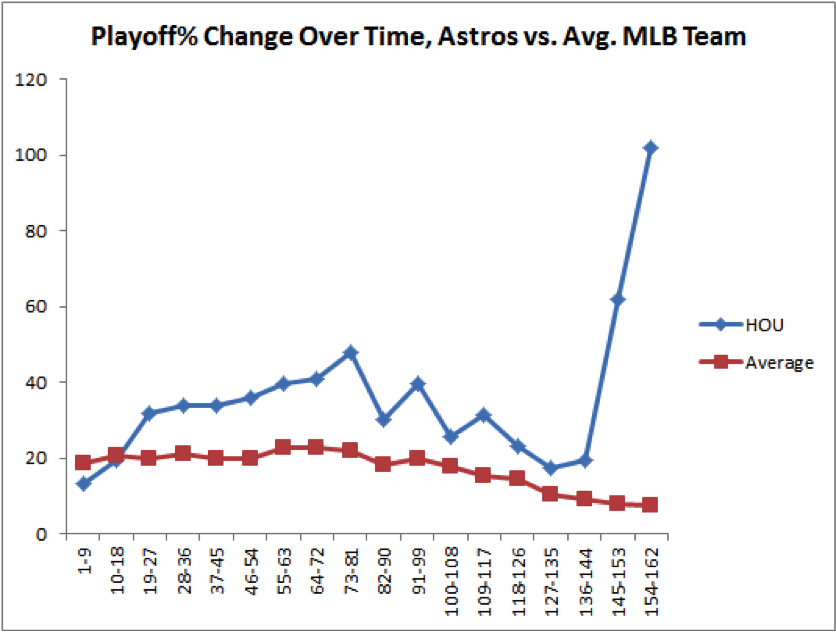 The graphs below show how every team (AL, then NL) arrived at its final tally of playoff odds points, revealing which teams made their moves (one way or another) early and which had their seasons decided toward the end. In these images, games are on the x-axis, and the total change in playoff probability is on the y-axis. The steeper the line over a given range of games, the greater the upheaval in the team’s playoff odds at the time. 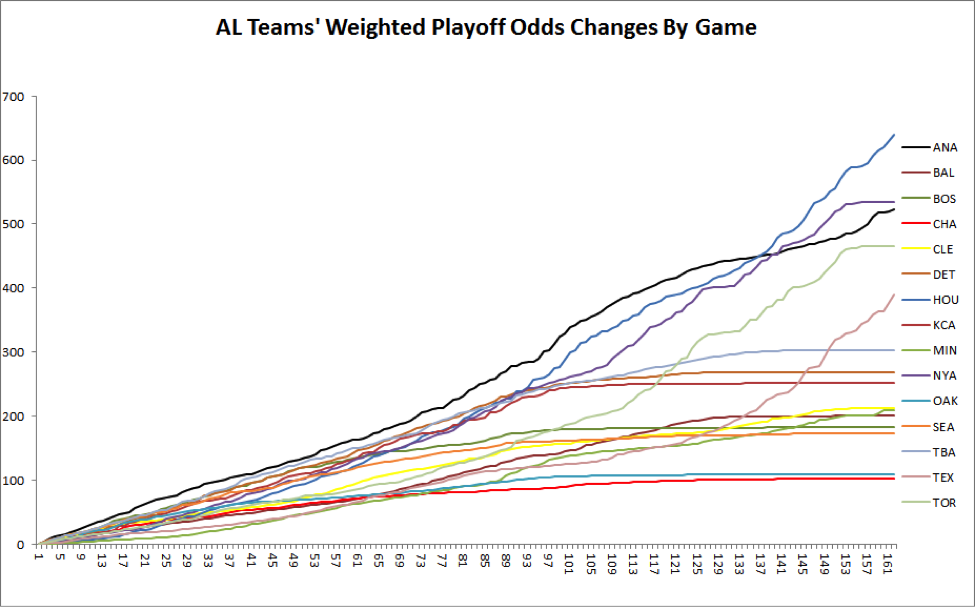 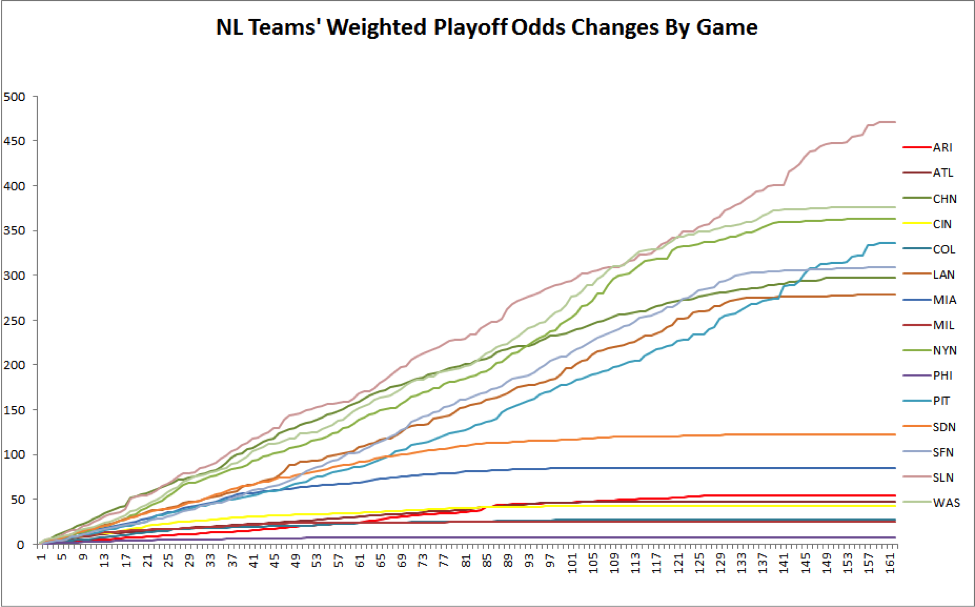 Most of the NL teams’ lines plateau as they approach the finish line, since the senior circuit’s races were closer to settled during the denouement. In the AL, the lines of the Angels, Rangers, and, most of all, the Astros leap upward at the end.

That’s a recipe for excitement. This purely playoff-odds-based method doesn’t know anything about the non-numerical qualities that make teams exciting: their styles of play, their established stars, their high-profile rookies, their recent postseason successes or absences. If it did, though, the Astros would still be close to the top, by virtue of their unexpectedly early recovery from a self-inflicted nosedive that pushed them below the 60-win mark for three consecutive seasons, bottoming out at 51 wins in 2013 and making them a frequent target of anonymous industry sniping. Couple that steep upward trajectory with Dallas Keuchel’s beard, the talented Jose Altuve’s continuing tiny-ness, and Carlos Correa’s instant superstar status as the most promising member of the game’s youngest collection of position players, and you have the ingredients of a team that was impossible not to pay attention to in 2015.

Thanks to Jessie Barbour and Dan Brooks for research assistance.

The 30 Finale: Throw Your Hands Up Like Max Scherzer and Say Goodbye to the Regular Season

NFL Week 4 Winners and Losers: The Disappearing Dallas Cowboys and the Emergence of Todd Gurley