MLB’s Most Exciting Regular-Season Teams of 2014 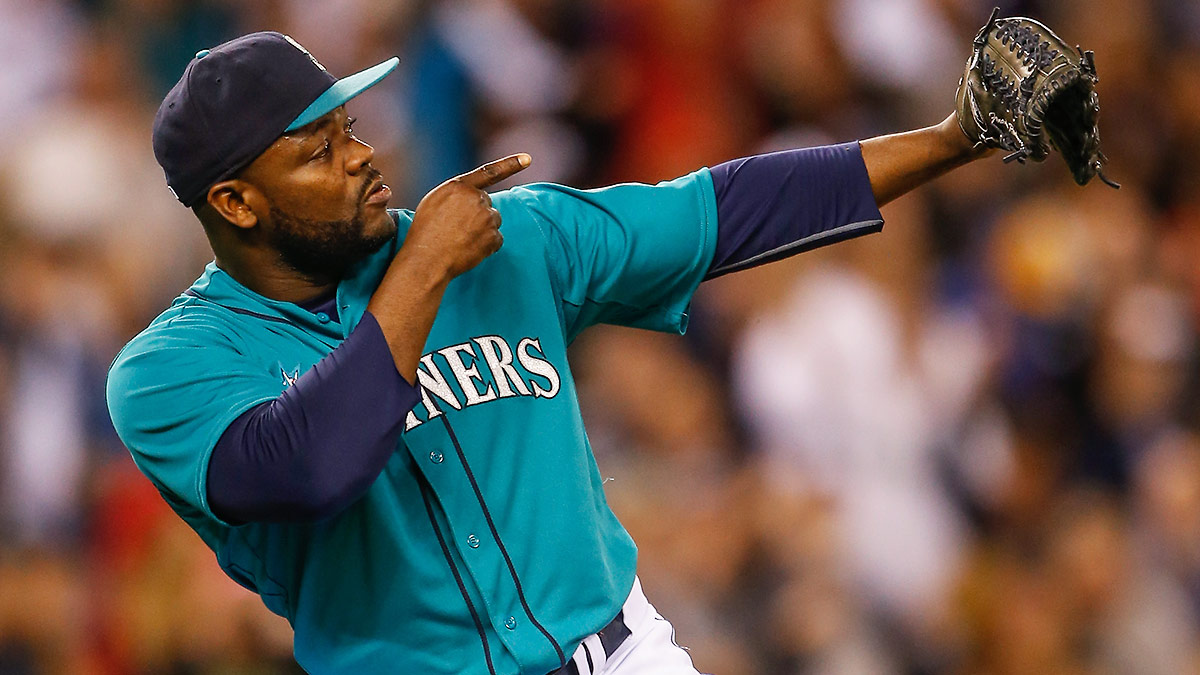 The last day of baseball’s regular season reminded us that in sports, uncertainty equals excitement. Early last week, it looked like we were headed for a final few days in which every playoff spot would already be assigned, which would have limited the drama to decisions about rearranging rotations and starting or resting regulars. Instead, we got a weekend in which two teams had a chance to exchange wild cards for division titles and a third had the opportunity to claim a wild card and bump another team out of October altogether.

On Sunday, Pirates, Royals, and Mariners fans rooted for upsets, while Cardinals, Tigers, and A’s fans watched to see whether their clubs could avert disaster. As it turned out, all three leaders preserved their narrow edges, but because of the potential for change — not to mention Jordan Zimmermann’s no-hitter, Derek Jeter’s final final game, and Jose Altuve’s Twitter-assisted batting title — the day was never dull.

If uncertainty makes a single day more exciting, then theoretically, it should do the same for the string of single days that composes a season. By quantifying each team’s accumulated uncertainty over the past six months, we can crown one club’s season as the most exciting of 2014.

To do so, we’ll need an assist from the Baseball Prospectus Playoff Odds Report, which provides a daily snapshot of how likely each team is to make the playoffs via a division title or wild-card berth based on thousands of simulations of the rest of the season that draw upon BP’s estimates of playing time and each team’s true talent. Every day, the leaguewide outlook for October changes as teams win or lose and players get injured or recover more quickly than anticipated. And every morning, the Odds Report adjusts the playoff probabilities up or down to reflect the latest developments.

Because it incorporates PECOTA’s preseason projections, the Playoff Odds Report rules bad teams that get off to slow starts in difficult divisions out of contention almost immediately. Teams that are projected to play well and get off to strong starts, however, have high percentages early on and never deviate far from them. Neither the hopeless, wait-till-next-year teams nor the shoo-in winners would experience the frequent swings in playoff probability of a team that was projected to be good but struggled, was projected to be bad but surprised, or played as anticipated but faced a dogfight down to the wire.

So which teams’ seasons were the most uncertain — and thus, by extension, the most exciting? The graph below, generated from data provided by BP/Brooks Baseball statistician Dan Brooks, who cooked up the idea of using playoff odds shifts as a proxy for excitement last season, shows the sum of the absolute values of each team’s game-by-game changes in playoff percentage, or the odds that a team will qualify for the playoffs by winning either a division title or a wild card.1 The higher a team’s sum, the more uncertain its fate throughout the year. 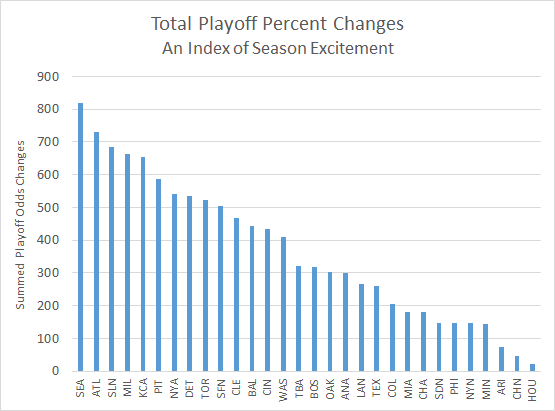 There’s one limitation here, of course: Story lines that don’t stem directly from the standings are lost on PECOTA and the playoff odds. For instance, the numbers don’t know that the Royals were fighting to end a streak of 28 seasons without a playoff appearance; that the A’s raised the stakes for their season through their activity on the trade market; or that many of the Dodgers’ and Mariners’ wins were enriched by the brilliance of Clayton Kershaw and Felix Hernandez, respectively. Even so, the results generally line up with what our intuitions would suggest.

It might seem cruel to declare the Mariners’ season the most exciting of all a day after the A’s eliminated them from the wild-card race by a single game. However, the Seattle Post-Intelligencer started it with a Sunday story about the Mariners’ elimination that labeled them “one of Major League Baseball’s most exciting teams.” We’re just providing statistical support. For our purposes, the regular season is about the journey, not the destination, and the Mariners’ journey was exciting enough to boost their attendance by a higher percentage than any other team and to earn one of baseball’s most embattled GMs an extension. The P-I pronounced 2014 a “roller-coaster” season for Seattle, and the up-and-down path of the Mariners’ day-by-day playoff odds sent the same message. 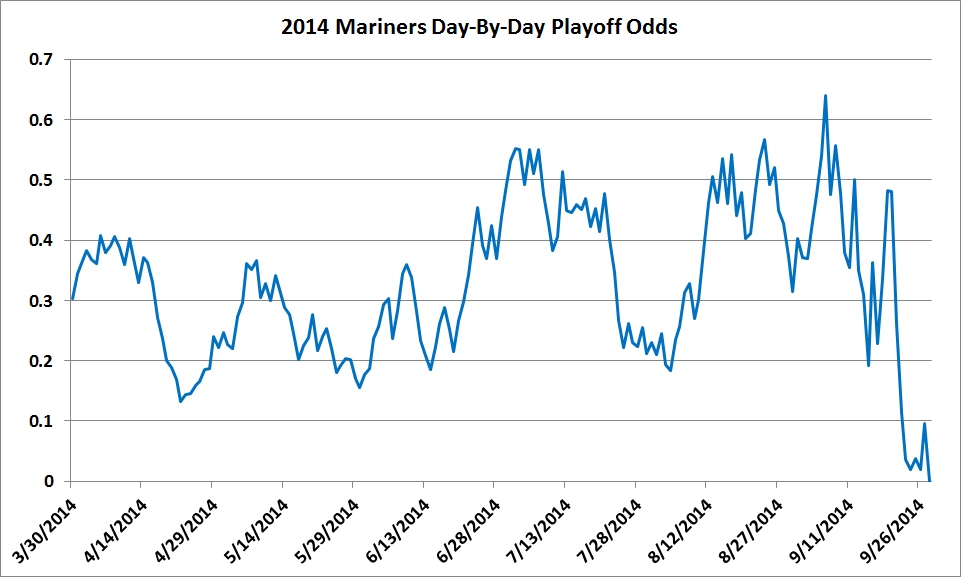 PECOTA’s projections (coupled with BP’s depth charts) gave the Mariners a 30 percent shot at the playoffs to start the season, but their odds declined to less than half that by late April after they started the season 7-13. The M’s worked their way back to .500 for good by June 1 and had an 18-10 month to raise their odds into the mid-50s, but a losing July plunged them back into the teens. In August, they were winners again, posting a 17-10 record while their competitors scuffled, and their odds peaked at 64 percent on September 6, when they led the Tigers by a game and a half in the second wild-card slot. A 9-12 finish doomed Seattle, since Detroit and Kansas City finished relatively strong.

The Mariners’ late-July acquisitions — Kendrys Morales, Austin Jackson, and Chris Denorfia — combined for a .216/.274/.307 line in 565 plate appearances, hitting worse as a group than James Jones or Corey Hart, two of the players whose offensive struggles made those deadline additions necessary. Had the M’s gotten anything from their midseason reinforcements, we’d be handicapping their chances in a tiebreak or the wild-card game. As it was, though, no team took us on as many detours into and out of contention as the Mariners, and judging by the results of a P-I poll, the team’s success-starved fans enjoyed the ride. As U.S.S. Mariner’s Jeff Sullivan put it, “Every day of this regular season, we got to give a shit.”

Now let’s take a look at the daily playoff odds for the five most uncertain/exciting teams after Seattle, three of which made the playoffs and two of which cratered to lose their grasps on the playoff spots they’d flirted with all year. 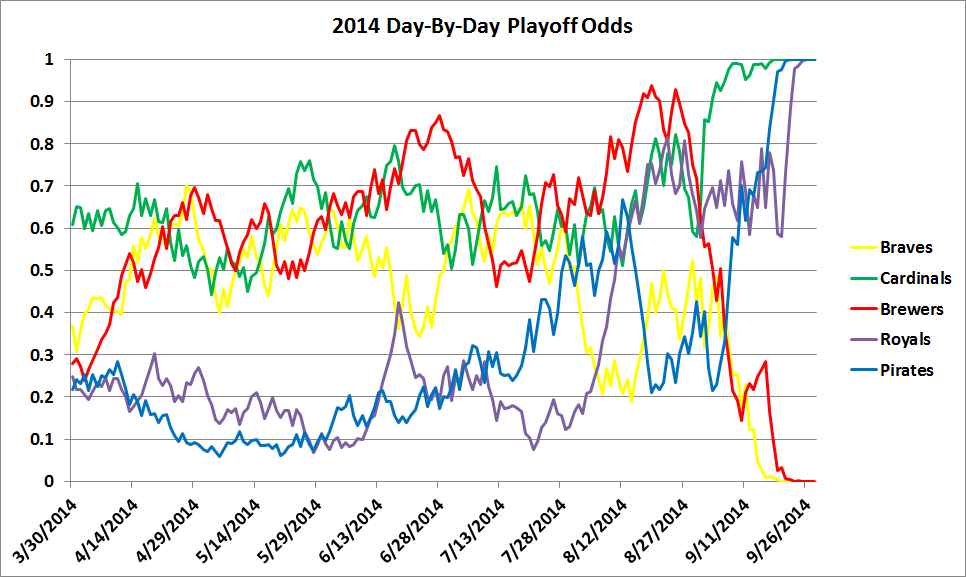 The Cardinals kicked things off with a playoff percentage more than twice as high as the Brewers’, indicative of PECOTA’s (and most analysts’) higher expectations for St. Louis. But the Brewers started the season 16-6 and surpassed the Cardinals’ playoff percentage on April 23. The two teams rivaled each other in playoff probability for most of the summer, but after the Brewers peaked at 92.9 percent on August 25, they went 9-22 to end the season, and their odds declined more quickly than Bernie Brewer on the Miller Park slide while St. Louis finished strong and proved PECOTA’s preseason assessment correct.

The Pirates, who started the season with odds even lower than the Brewers’, languished below 30 percent for almost the whole first half of the season but picked up the pace after the break. Aside from one day in early April, Pittsburgh didn’t have a higher playoff percentage than Milwaukee until September 7. While the Brewers were a mirage created by an unsustainable April bullpen performance, their hot start and rags-to-riches-to-rags trajectory took them on a more memorable trip than most Milwaukeeans could’ve anticipated. And with three of its teams placing in the top six, we can call the NL Central 2014’s most uncertain/exciting division.

The Nationals were always the team to beat in the NL East, so the Braves began the season with odds not much better than the Brewers. Like Milwaukee, they enjoyed some early success, but they stagnated in the middle months of the season, and their odds tanked as the Nats left them behind in the division. A 7-18 September in which they were outscored by 50 runs sealed their fate (and GM Frank Wren’s). The Royals followed a path to October not unlike the Pirates’, climbing above 40 percent courtesy of a 10-game winning streak in June but dipping below 20 percent as late as August 2, when they were only three games over .500. That day marked the beginning of an eight-game winning streak that put Kansas City in the thick of the race to stay.

We can look at the same data in a different way to see how each team arrived at its cumulative odds change for the season. This time, the x-axis is games instead of days. The steeper the line, the greater the rate of change in playoff odds over a given span. The first graph features AL teams, while the second stars the senior circuit. 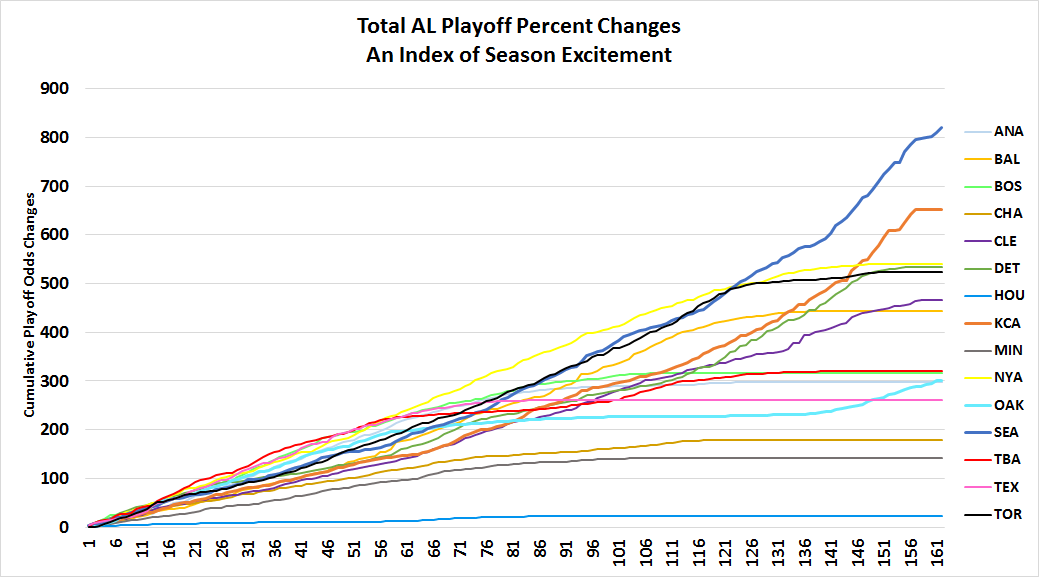 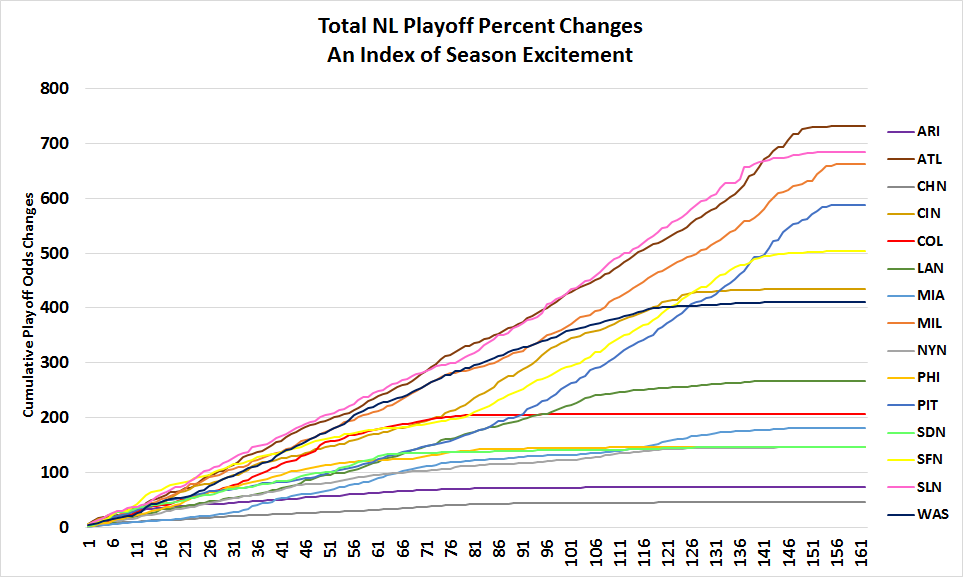 These graphs show us when each playoff team made its move. The Dodgers, Nationals, Orioles, and Angels all have long plateaus toward the end of the season, when their playoff status was almost assured; hence their absence from the list of most exciting teams. Oakland also had a plateau for much of the season, but their line curls upward at the end to reflect the change in their odds as they flopped after the All-Star break and nearly lost it all. Teams that were never close to contention, of course, plateau earliest: The Astros, Cubs, and Diamondbacks, in particular, never won enough to move the needle far from “empty.” On two of those teams, a manager and/or general manager paid the price; the Cubs, though, promoted a handful of high-profile prospects, which made them one of the most exciting teams for fans who fixate on young talent.

There’s one more way to measure excitement: by cumulative change in BP’s “adjusted” playoff percentage, which computes each team’s likelihood of reaching the division series — a certainty for division champions, but essentially a 50-50 proposition for wild-card winners. A division title is a much more valuable prize than a wild card, so in theory, the race for a division title should be almost as exciting to a team that knows it can count on a wild card as the race for a wild card would be to a team that’s just hoping to make the playoffs. In practice, it probably doesn’t work this way, since some fans still think of the wild card as the big reward it was before the playoff field expanded to 10 teams and the wild-card winners became the postseason’s second-class citizens. 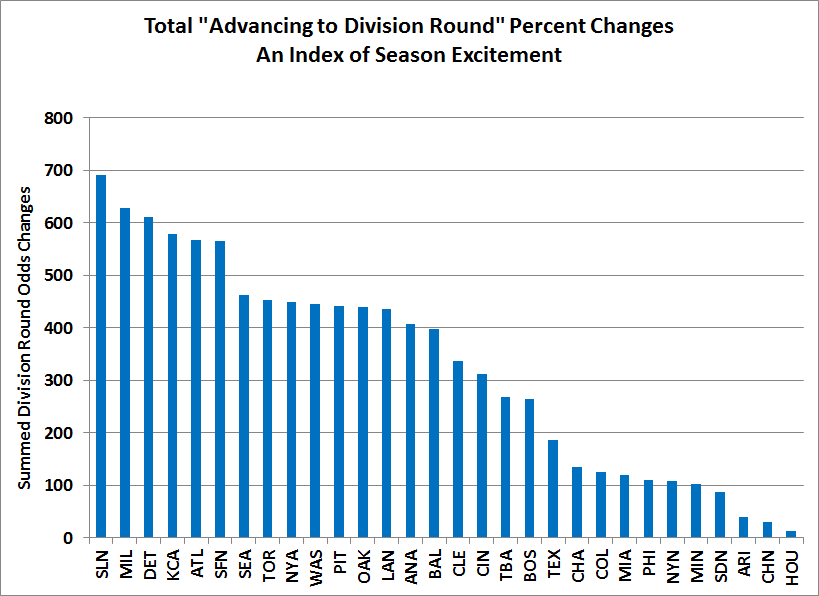 So congratulations to fans of the Mariners, the Braves, the Brewers, and the other exciting teams whose seasons ended on Sunday. You’d probably rather be rooting for a more predictable team that’s still alive, but there’s something to be said for an exciting six months of not knowing what’s next.

The 30 Finale: Highlights, Lowlights, and 2015 Forecasts