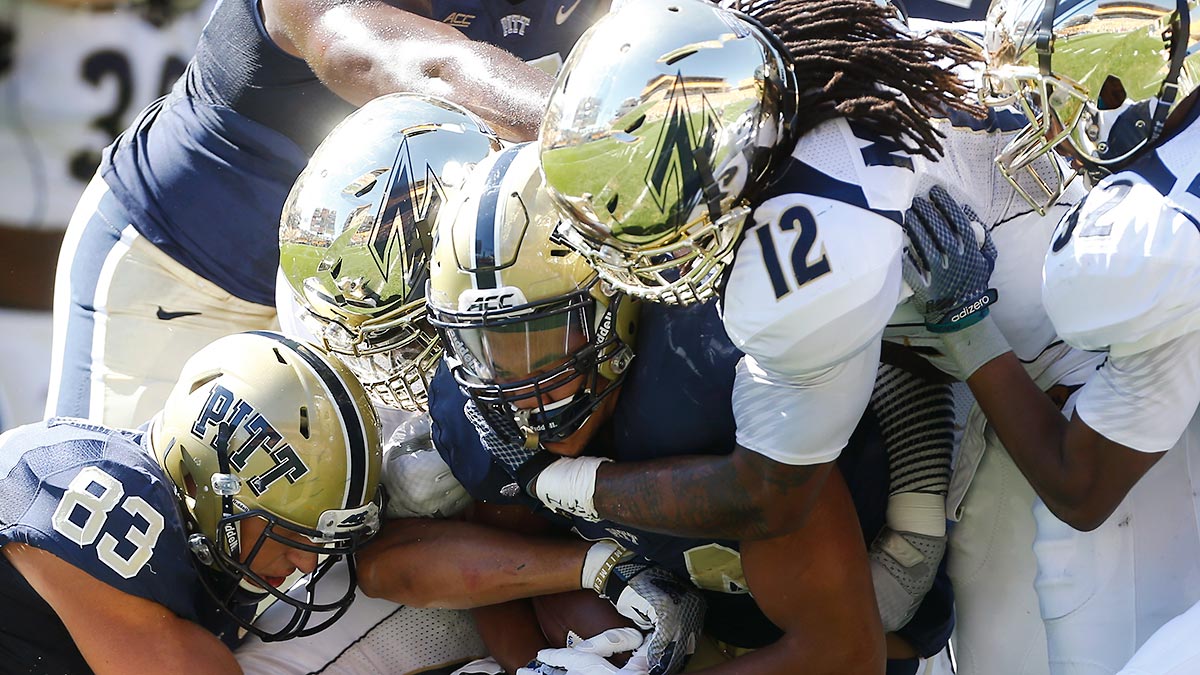 Celestial Recalibration of the Week: The Gift of Anticipation

Seasons like this are tangible treats. We’re becoming more and more convinced that we’re in for another 2007 — that an Appalachian State–Michigan rematch in Week 1 accidentally ushered in another year in which everyone beats everyone else in the goofiest fashion possible, nobody looks especially prepared to go undefeated, and the Heisman goes to a centaur or something.

We’ve got a month’s worth of data in front of us, and the possibilities are giddily endless. Pick a path, and follow it to madness: Arkansas’s Whole Hog/Whole Ham brand of football has it winless in league play for Bret Bielema’s entire reign, yet the Razorbacks are still a terrifying prospective opponent for the SEC teams that remain on their dance card. We suspect Oklahoma might be the best team in the country, yet we have next to nothing to go on to bolster that assumption, and strongly suspect we won’t know more, with anything close to certainty, before November. Boston College has beaten UMass, USC, and Maine, and also lost to Colorado State and Pitt, and yes, before you ask, Pitt did just lose to Akron, as one does. Doesn’t Terry Bowden look fetching in his Colonel Kurtz headband?

Five weeks up the river, we pause to honor the luminaries lighting our way …

North Carolina State played Florida State close and fast and magical, and when we say magical, that is merely to indicate that Wolfpack quarterback Jacoby Brissett is a sorcerer:

Meanwhile, we like our punters three ways around these parts: Australian, fond of scoring surprise touchdowns, and getting those touchdowns called back for excessive celebration. When it’s a 51-yard surprise touchdown, we will accept a two-thirds fulfillment and welcome the likes of Arkansas’s Sam Irwin-Hill into the firmament.

Finally, in the true Dionysian spirit of college football, here’s Ole Miss kicker Gary Wunderlich getting thrown out of the Memphis game for fighting. We like our special-teamers surly, too.

Ohio State’s rout of Cincinnati was interrupted at one point by a fan running onto the field, and that fan had the misfortune to cross the sight line of Anthony Schlegel, assistant strength-and-conditioning coach for the Buckeyes and a former OSU linebacker:

I can only imagine the adrenaline rush that comes to a S&C coach when he gets a free pass to commit assault. pic.twitter.com/8HxUMhQuFJ

Runner-up: Charlie Weis, getting paid cool millions from two different schools to nap and lose football games. We’re installing him here in the Pantheon for a couple reasons: first, because he’s clearly really, really good at something, and that something is “selecting an agent”; and second, as a warning to uncreative athletic directors on future coaching searches to veer clear. He has plenty of money. Leave him be.

The Little Brown Jug–toting trunk, which seems to just screamingly invite some sort of heist:

We have some extra luggage to pack on the plane back to Minnesota! #Gophers pic.twitter.com/XISa0XVBt8

It is surrounded by burly football players. But isn’t the brazen lettering on the box just begging for hijinks?

Runner-up: Akron’s gold chrome helmets, which proved a mesmerizing trap for the Pitt Panthers not unlike the statuette in the opening scene of Raiders of the Lost Ark. (Don’t you hate those YOU WANNA FEEL OLD GUESS HOW OLD THIS ALBUM IS media blasts? Too bad, here’s another one: Akron beat Pitt on Saturday. How long ago does that feel already?)

Where there are gods, our ancient history books tell us, there are grapes in bunches. This week in the noblest of intentions gone quite awry:

• Penn State, which joins Florida in the animated-GIF annals of Times Teams Have Had Players Block Their Own Teammates.

• Texas Tech quarterback Patrick Mahomes, who recovered his own fumble in time to get off a pass, which went into and out of the hands of a teammate and was then intercepted by Oklahoma State, a move that will not go down in the books as two turnovers but feels like it maybe should’ve, spiritually.

• SMU, which has scored one (1) touchdown in four games and was about to add a second during Saturday’s Iron Skillet matchup, but had Darius Joseph’s 36-yard would-be scoring catch called back on the grounds that his elbow had hit the turf.

• And the Big 12, which is endeavoring to ruin what seems like the best part of one’s golden years — wearing nothing but free clothes, all the time — by callously asking Bill Snyder to pare down his game-day rotation of vintage bowl gear.

He look’d into infinity, and … waylp.

MLB’s Most Exciting Regular-Season Teams of 2014