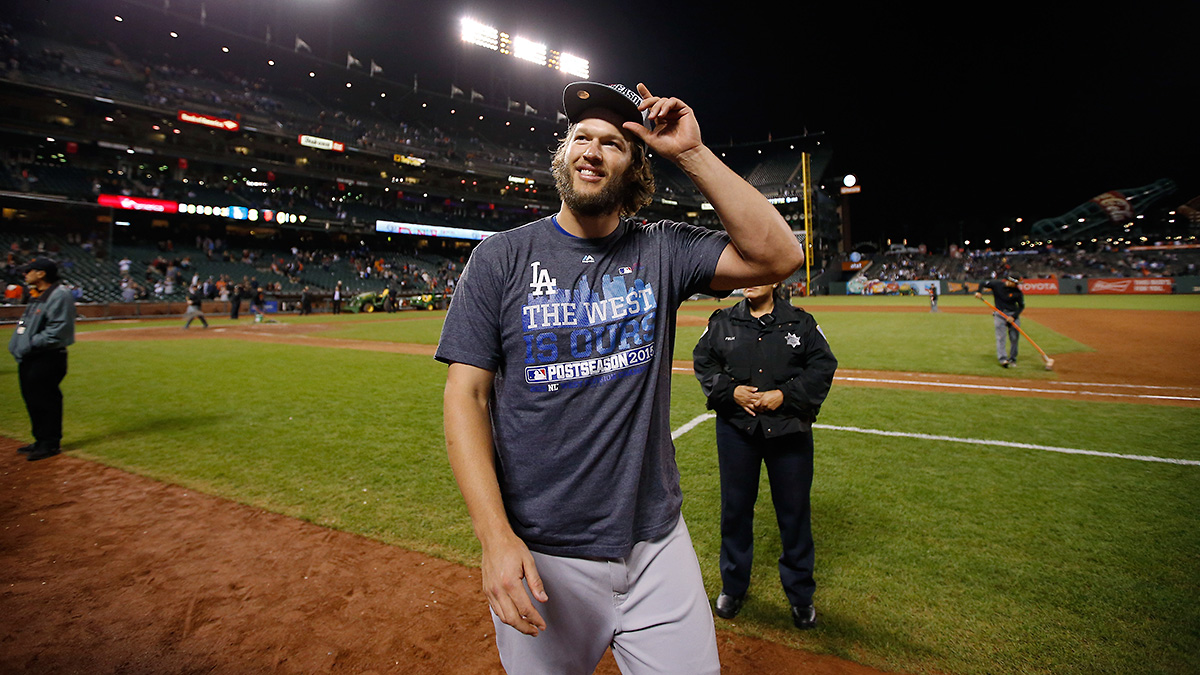 Clayton Kershaw is a magnificent pitcher, unequaled even among his contemporaries, who are the biggest, strongest, hardest-throwing, best-trained generation of pitchers in the history of the game, and who enjoy the most favorable set of playing conditions for pitchers in 30 years.

Kershaw, still only 27, is already among that special class of active player whose only barrier to Hall of Fame enshrinement is service time. He is a snowflake made out of plutonium.

Until this week, I’d have written and filed those two paragraphs twice a week, every week of the year, if my editor would let me, because what else was there to say?

But as of Tuesday night, there’s new evidence of how special Kershaw is. With a chance to clinch the Dodgers’ third straight division title — against Madison Bumgarner and in San Francisco, no less — Kershaw delivered a masterpiece, allowing one hit and one walk in a complete-game, 104-pitch effort. Most significantly, he fanned 13 Giants, giving him 294 strikeouts on the season.

Kershaw is slated to start on Sunday, but with nothing to play for, any projections about Kershaw’s schedule going forward should be written in pencil. On one hand, Kershaw can start on Sunday and still start Game 1 of the NLDS on four days’ rest. On the other, there’s nothing to be gained by pushing a pitcher who has already thrown an MLB-high 229 innings in service of chasing a round number.1

Sending Kershaw back out there on the eve of the playoffs to chase 300 strikeouts would be pointless, but you know what? Baseball in general is pointless, so the Dodgers might as well have Kershaw pitch until he hits 300. He has struck out at least five batters in each of his past 55 starts, so if he does pitch and throws anything resembling a full game, he’ll hit the mark.

So assuming Kershaw makes it, let’s put that milestone in its historical context.

One myth about the 300-strikeout season is that it was at any point common. Only 33 times since 1901 has a pitcher struck out 300 batters or more in a season, with most of those campaigns coming from the same handful of pitchers. Members of the 1980 Astros and 2001 Diamondbacks account for 18 of the past 20 300-strikeout seasons, and nobody’s done it since 2002. In fact, 24 of those 33 years came between 1970 and 2002, an era that marked a particular turning point in the evolution of the starting pitcher.

So many parts of baseball’s pitching environment rely on cyclical trends. Offense in general goes up and down, as do home runs, stolen bases, batting average, and most other things. The most important exception is strikeouts, which have increased steadily over time on a per-inning basis.

Like most repetitive physical acts, pitching can be done with an eye either toward intensity or toward endurance. Pitchers of the early 20th century pitched to contact and had more elaborate windups, which made them able to throw complete games pretty much every time out and start once every three days. Today’s pitchers are bred to miss bats, and the faster the fastball and the more devious the breaking pitch, the greater the stress on the body, and so pitchers can’t work as many innings as they used to.

Imagine an auto race, like the 24 Hours of Le Mans, that had to be completed without stopping. It could be done, but everything about the race, from the car’s aerodynamics and drivetrain to drivers and driving style, would be geared for endurance and reliability. You wouldn’t be able to put up blistering lap times, nor would you really want to, because your car and driver would both break down.

Allowing pit stops changes the character of the race entirely — so what if going fast takes more fuel and wears out your tires? You can stop to get new ones and even change out your driver, so the car always runs at peak performance.

The modern depth of pitching talent is like introducing pit stops to an endurance race: Now, pitchers can perform at their best on a per-pitch basis, expecting to be replaced by a fresh arm when they get tired.

The result is that over time, baseball has traded quantity of innings … 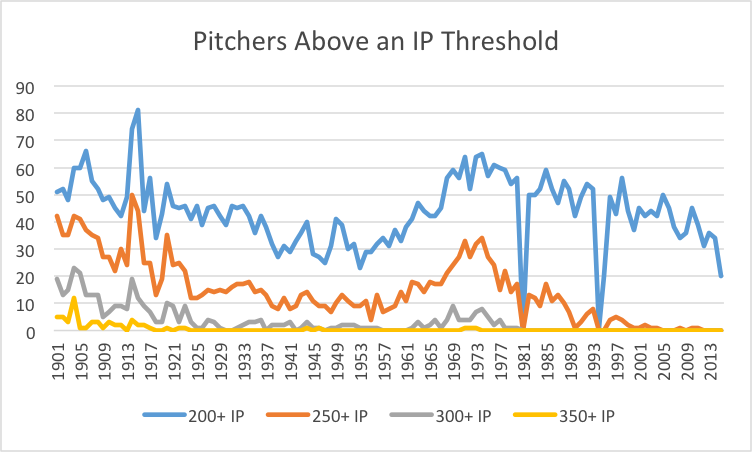 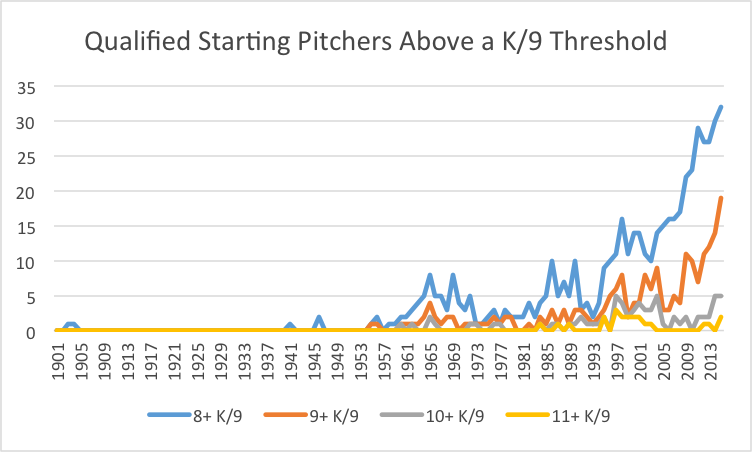 But to reach 300 strikeouts, you need both.

From 1901 through 1940, pitchers recorded 300 or more innings 287 times, but only twice did a starting pitcher strike out eight batters per nine innings: Rube Waddell in 1903 and 1904. On the other end, 33 qualified starters are striking out at least eight batters per nine innings this year, but nobody has thrown 300 innings in a season since 1980.

Around 1970, baseball entered the golden age of 300-strikeout seasons, a period in which the decline in innings met the increase in strikeouts per inning at a perfect point.

Around that time, strikeout rates were still rising, but starting pitchers were also reaching the peak of a trend in which they were being asked to throw more innings than they had in a generation — notice the uptick in the late 1960s among 250- and 300-inning seasons. From 1970 to 1972, five different pitchers notched 300 strikeouts in a year, and only one of them averaged more than a strikeout per inning. In 1971, Mickey Lolich threw a backbreaking 376 innings and struck out 308 on a K/9 of just less than 7.4, which would put him 47th among qualified starters in 2015.

Every pitcher to hit 300 strikeouts since 1986 has posted a K/9 of 10 or better. If Kershaw joins that select club on Sunday, he will have done so in the second-fewest innings in history, behind Pedro Martinez, who threw only 213 innings in 1999 but in the process posted one of only two 13 K/9 seasons ever for a starting pitcher. Kershaw’s 11.55 K/9 ratio, if he keeps it up, would also be the seventh-highest ever for a pitcher with 300 strikeouts (only a rounding error behind Randy Johnson’s 11.56 in 2002), and higher than any 300-strikeout season before 1998.

The 300-strikeout season has always been the province of outliers, and Kershaw fits into that club. Chris Sale or Yu Darvish could strike out as many batters per inning as Kershaw, but they don’t throw as many innings, while Felix Hernandez or David Price could match him in innings but not in strikeouts.

Nevertheless, that Kershaw stands ready to reopen the 300-strikeout club shows that it is possible under a modern pitcher’s workload, and raises the possibility that others could follow. Just as in the 1970s, when pitchers were throwing so many innings they could hit 300 strikeouts with a lackluster K/9 ratio, pitchers are now striking out so many batters that it’s possible to get to 300 strikeouts in relatively few innings.

Because while Kershaw, human rebuke to normalcy that he is, is leading the league in both innings and strikeouts per inning, neither his 229 innings (with one start to go) nor his 11.55 K/9 are untouchable figures for a modern top-of-the-rotation pitcher, and if 100-plus years of baseball history is any indication, 11.55 K/9 will look more and more normal in the near future.

Kershaw is proving that the 300-strikeout club is like any uncharted or forgotten territory: It takes someone of special quality to get there, but showing that it can be done is often all it takes to inspire others to do it, too.