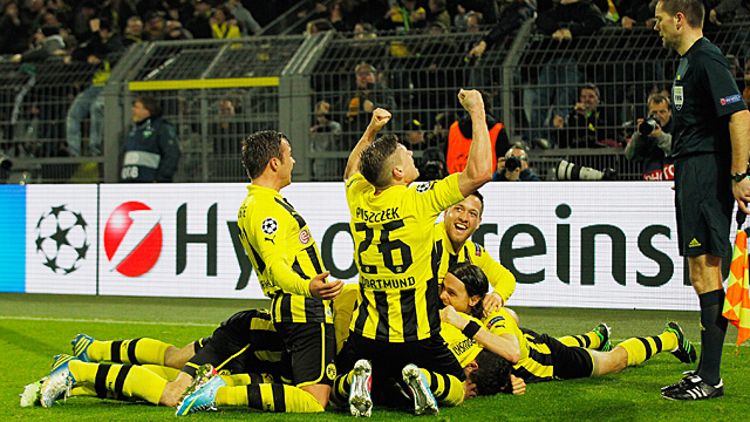 The Bundesliga is ascendent in European club soccer. They have the best homegrown players, the strongest fan support, the best Tifos (even if they steal their concepts from the Italians):

And now they have half of the UEFA Champions League’s semifinalists. After their 4-0 dismantling of Juventus, Bayern Munich is the tournament’s prohibitive favorite. Even without a full-strength midfield in either leg of the tie, they still dominated the center of the pitch. The 4-0 scoreline flattered Juventus champions, and, after a shaky second leg with Arsenal, served notice that Bayern’s domestic form is no fluke.

Dortmund’s path through Malaga was bumpier. They were held to a 0-0 draw in Spain, with wunderkind Mario Gotze squandering a number of excellent chances. In the second leg, Dortmund needed two goals late, after Eliseu struck for Malaga in the 82nd minute on Tuesday. Somehow, they got them.

In one of the most exciting five minutes of soccer action you could imagine, Dortmund got two stoppage-time goals to turn a one-goal deficit into a shocking 3-2 win that will be remembered in the annals of soccer history without controversy … what’s that?

Dortmund’s winning goal was one of a number of blown offside decisions that marred the quarterfinal round. Upon Robert Lewandowski’s initial delivery into the box, Malaga successfully held a high line, forcing four Dortmund players offside. Four. And it wasn’t close. Even after that wasn’t called, Felipe Santana’s final touch also appeared to be offside (though that was a trickier call for the linesman, as the goalkeeper was lying prone at the time). To find as egregious a missed offside call, one would have to go back … to the 82nd minute of the same match, where Eliseu’s finish was also offside.

Or we can look at Zlatan Ibrahimovic’s first-leg equalizer for Paris Saint-Germain.

These aren’t controversial red cards or borderline decisions. These are objective errors, errors that ought to be corrected. For all the talk about goal-line technology, how often are goals incorrectly ruled off? (Yes, England, we see you, but still, the answer is not very often.)

Incorrect offside decisions regularly affect the outcome of matches, and while there’s no currently acceptable replay solution, that doesn’t mean the situation should be treated as though it were unsolvable.

The issue with any sort of replay system in soccer is that stoppages required to get an offside decision correct would also ruin the flow of a match. That said, the soccer equivalent of sabermetricians are already monitoring player-positioning throughout matches. Is there a way to use that technology to have a means of flagging offside without the use of linesmen or replays? When we can make a robot goalkeeper that can (at least initially) stop Lionel Messi, we should be pursuing a technological solution to this problem. Let’s work on this, FIFA. (Oh, what’s that, FIFA? You’re cool with things the way they are? Of course.)

Let’s start with Didier Drogba’s “holy shit, maybe they can come back” goal for Galatasaray:

Holy. Shit. This goal is a more elegant version of Danny Welbeck’s goal for England in Euro 2012; does anyone doubt that Drogba meant to put the ball exactly where he did? And to think, Drogba was condemned to playing out the rest of his career in China mere months ago. Cue footage of Fernando Torres’s last goal that was anywhere near that sublime.

Not to be outdone, though, is Dortmund’s Marco Reus, setting up a Robert Lewandowski equalizer:

This goal illustrates, in one beautiful sequence, why people love Dortmund. The question of “where must my foot go to direct the ball into the path of my striker at the proper pace?” is answered here by Reus without any regard for how the human body typically moves. This assist is not the beautiful game; it’s the beautiful game reduced to the trigonometric precision of billiards. You can tell me that Germany does not have a factory where they produce quality midfielders alongside Bavarian timepieces, but until UN inspectors go in and examine all the factories in North Rhine-Westphalia, I will remain unconvinced.

The first leg of the round saw a groin injury befall arguably the best of those German midfielders, Bayern Munich’s Toni Kroos. While Kroos isn’t the biggest name on the Bavarian side, he had become their most essential midfielder. Combining powerful attacking instincts, great positional and passing sense, and a tireless motor, Kroos had supplanted Thomas Muller in the center of Munich’s attack and was becoming the most complete no. 10 in the world (non-Messi division).

Kroos’s disciplined yet explosive play also allowed manager Jupp Heynckes to redeploy the rest of his side in a number of ways. His first-choice lineup with Kroos featured Thomas Muller shunted out wide to the right, where he provides a steady outlet, allowing Philipp Lahm to bomb forward. This also turned Arjen Robben into a super-sub, able to replace Kroos or Muller to bring an even more threatening offensive tilt to the right side. If even more attacking verve was needed, Robben could come on for Javi Martinez, with Kroos moving into the pivot alongside Bastian Schweinsteiger, with Muller moving into a more central attacking position.

With Kroos in the lineup, Heynckes could also be more comfortable using any of his strikers. Mario Gomez, Mario Mandzukic, and veteran Claudio Pizarro all provide different styles of play up front, and all fit nicely with Kroos slotted behind them; without Kroos, only Mario Mandzukic’s tenacious pressing and hold-up game fits. Mandzukic will be out of the first leg of the semifinal because of yellow-card accumulation, and without Kroos, it’ll be interesting to see how Heynckes responds. Will Muller be sent out as a false 9? Or will Mario Gomez retake his place in the first XI? The answer will probably depend on the draw.

The two best players in the world will once again be in the Champions League semifinals. However, the form and fitness that they bring to the next round are vastly different.

Cristiano Ronaldo is playing at the peak of his powers. Let’s look at his first-leg goal against Galatasaray:

So much poise and precision in that chip. Madrid has had an up-and-down season, as their exquisite home form has been paired with a number of lackluster showings on the road. You wouldn’t like their chances at the Westfalenstadion, Allianz, or the Nou Camp, but when Cristiano Ronaldo is on, snatching an away goal seems likely. And a road goal for the Madridistas could well be the difference between a date at Wembley or cleaning house.

In the first leg, Messi opened the scoring with, what was for him, a relatively routine strike:

Dani Alves’s delivery was an essential contribution to that goal, but Messi’s finish on the half-volley across Salvatore Sirigu was still a wonderful bit of skill.

What was amazing about Messi in the quarterfinals was his return in the second leg. Premature returns from injury in soccer are usually a bad idea. And hamstring issues, in particular, are likely to recur or become more severe without proper rest. But with Barcelona down a goal at home after an early second-half strike from Javier Pastore, Messi immediately began warming up. When he was introduced at the Nou Camp, taking the place of the husk of what was once Cesc Fabregas, the stadium came to life. His introduction completely changed the shape of the game. When Barcelona got their equalizer (which would also serve as the winner for the tie), Messi was involved in the buildup. But it wasn’t so much his touch that made the play happen; it was his presence that had reoriented PSG’s defensive shape. The attention that Messi demands, even at only 30 percent, cannot be overstated. And if Barcelona does wind up winning the Champions League, Messi’s shortest appearance in the knockout stages of the tournament will have made the difference.