About Last Weekend: When the East Is in the House 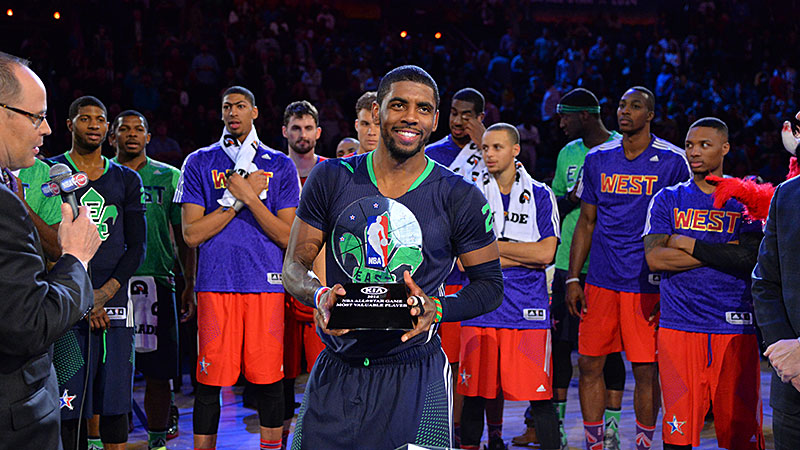 In case you were finally figuring out why LeBron always sits out the dunk contest, here’s what you missed in sports last weekend:

• The East beat the West, 163-155, in the NBA All-Star Game. Kyrie Irving won the MVP award, scoring 31 points. “Well, I guess they have the better conference,” a dejected Spurs head coach Gregg Popovich, not even in attendance, said after the game. “All this work we’ve been doing all season has been for naught. Take her down boys!” Popovich then signaled the hard hat–wearing pair of Tony Parker and Tim Duncan, who together pushed down a plunger setting off the implosion of the AT&T Center in San Antonio. The three men then went their separate ways and would not see each other again until a strange set of coincidences would lead to them reuniting at a bar in Marrakesh in the year 2028.

• After winning a nail-biter against Russia, Phil Kessel and the U.S. men’s hockey team eased into the Olympic quarterfinals with a 5-1 win over Slovenia. “Curse you, America!” cried Slovenian Prime Minister Alenka Bratusek after the game. “First, Landon Donovan in the World Cup, then Tina Maze in the downhill combined. Now this? Ready the nukes!” When told that her army had no nuclear weapons, Bratusek replied, “Fine! Then ready our top naval forces!” When told that her top naval forces was a patrol boat named the Triglav, Bratusek cackled maniacally and said, “Perfect. Now send a telegraph to their prime minister and set sail for America! There will be cannons at dawn in like three months!”

• Nebraska put on an impressive defensive performance at the Breslin Center as it upset Michigan State, 60-51. “Man, what is this football?” asked stunned Michigan State junior Kyle Gunderson after the game. “And when is this? The past? And who is this? Eric Crouch? And how is this? By Eric Crouch running the option? And why is this?” Suddenly stumped, Gunderson fell into silent contemplation. Why would the Nebraska football team of the past travel through time to beat Michigan State’s basketball team? Why? It didn’t make any sense at all. Unless … “Oh no! Our basketball team,” Gunderson cried. “That’s a terrible loss.”

• Florida all but locked up the SEC title, outscoring Kentucky by 17 down the stretch on its way to a 69-59 win over the Wildcats at Rupp Arena. “It’s not fair,” complained Kentucky head coach John Calipari. “Billy Donovan has all this veteran leadership to lean on late in games. Why don’t I have that?” Calipari then paused, looked up, smiled, and said, “Oh yeah, that’s right.”

• The Atlanta Braves locked up All-Star closer Craig Kimbrel for four years and $42 million. “Forty-two million for a closer,” you say to yourself after hearing the details. “Isn’t that a little much in this day and age? And wasn’t Kimbrel a little off last year?” Unable to remember exactly how his season went, you pull out your laptop and say to no one: “I should probably look up his stats.” And as you navigate over to his Baseball-Reference page, you think about all the closers signed to deals they could not live up to: Francisco Rodriguez, Eric Gagne, Francisco Cordero. And you chuckle, as you’re probably not a Braves fan. But then you look at Kimbrel’s numbers. “Holy shit, really? Come on, no. That isn’t possible.” You laugh at your computer. “More than 15 strikeouts per nine innings? A career ERA+ of 282? Who hacked this site? Data Crusader?” Wishing you came up with a better hacker name, but willing to go with “Data Crusader” because probably no one will notice, you begin to go through the video footage of every game Kimbrel has pitched to track the stats yourself. Minutes turn into hours, hours into days, days into weeks. You come to, filthy, malnourished, with a spreadsheet that only confirms Kimbrel’s excellence. It’s April. You’ve been evicted, your spouse has left you, even your dog has left you. With nowhere left to go you hop on the Greyhound to Atlanta and buy one ticket to a Braves game. They’re playing the Phillies and you want to see Kimbrel in person, to believe the stats, to vindicate your quest for truth. But the Braves win by nine and Kimbrel doesn’t come into the game. You walk into the streets of Atlanta, and you look around. There are thousands of others just like you. Wandering wrecks, ruined by Kimbrel’s excellence. You make eye contact with another one of these people, and you fall in love. You decide to restart your life knowing that true excellence is possible, worth pursuing. And you say out loud to each other in unison, “Craig Kimbrel, am I right?”

Anonymous in Sochi: In Search of Russia's LGBT Community