Anonymous in Sochi: In Search of Russia’s LGBT Community 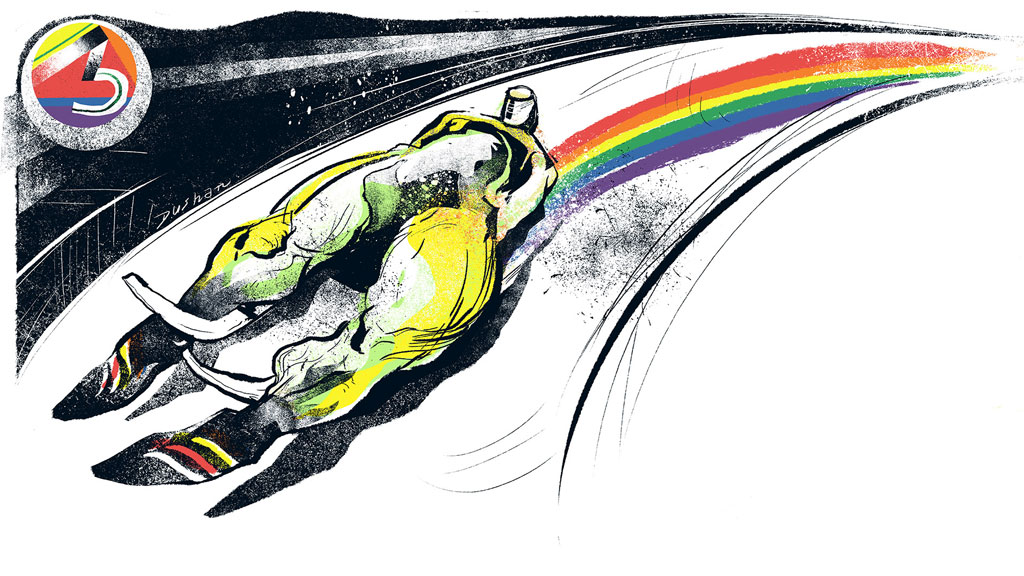 The liberty to write, to speak out, and to be who I am is something so natural to me, but here at the Winter Games, I’m quickly learning this is not the case for many — especially those within the LGBT community.

Normally, if I have a question about an issue, I go online and find a contact person from a local advocacy group. Better yet, I’d probably even go check out a gay sports league game, a bar, or go visit neighborhoods that are considered city centers for the LGBT community.

That isn’t the way it works here in Sochi. There isn’t a community center I can go to or a Pride House I can visit in Olympic Park (as was the case in Vancouver and London) to meet and discuss issues with other members of my community.

In fact, the epicenter of the gay community in Sochi, at least in a public sense, exists in two local gay bars. Unfortunately, they have been usurped by reporters, all trying to get the same story. I know someone who went to one recently. The night he hit the bar, several major outlets — including CNN — were there, too. He called it a “major circus.”

I understand the impulse. But it feels like the wrong way to approach this story. I decided to do something different, something that would allow me the opportunity to meet real people who would be able to speak to me about their lives, without a bunch of journalists around.

I checked out LGBT apps that — to my surprise — weren’t blocked. There were a number of visitors online with profiles (mostly from Western Europe and North America; I know because their hometowns were displayed). I spoke to some of these people; they were here working at the Games.

More important, there were also locals — a fair amount of them. The biggest difference between those living here and those visiting? The profile pictures.

For the most part, visitors’ faces were showing in photos. They had detailed profiles that described who they were and their interests.

The locals didn’t. Almost every single one of them had either no picture, a generic photo of a local monument, or a picture of a body that cut off before showing a face.

Almost all of them, hiding.

Meet “Boris,” a twentysomething college student in St. Petersburg who is visiting his family in Sochi. I found him on a networking app.

Boris (not his real name, obviously) was uncomfortable with the idea of meeting face-to-face. “It’s too small and dangerous to meet publicly in Sochi,” he explained. There are also strict requirements for entry to the Olympic campus, so we agreed to speak via Skype.

Boris is gay and closeted. None of his friends or family members know his secret. In fact, he says, the only person who knows his sexual orientation is his psychologist. He does not play on any gay-friendly sports teams because there are none. (He laughed when I asked him that.)

Boris has also never had dinner with gay friends, he’s never visited a community center to be educated on sexual health or human-rights issues, and he’s never been on a date.

His interactions with other gay men are limited to secret meetings and encounters that must take place within four walls, isolated from the outside world. He’s also never been to the gay bar in St. Petersburg, because it’s situated in the city center and if he runs into someone he knows from college, he will be outed and ostracized.

He’s afraid his friends would desert him if they found out. If his professors knew, he worries he wouldn’t pass his exams. He talked about that for more than five minutes.

Coming out as a gay man is not only a distant reality, but also something that would jeopardize his opportunity to graduate and move somewhere else in Europe, where he is hoping to practice medicine.

Boris has only one LGBT acquaintance at college, a woman who identifies as a lesbian. I asked him if she knew about him; he immediately said no. I was surprised at his response, and asked why he wouldn’t open up to another member of his own community. He said he worried that if they ever got into an argument, she could out him to his classmates and professors.

He also had questions for me during our 45-minute conversation — mostly about how my family reacted when I came out.

He was surprised and happy to hear that my parents still spoke to me and that I was still welcomed inside my home. Boris thinks he could never do the same; he fears his mom would be sad and embarrassed, and his dad would abandon him.

The conversation was an uncomfortable reminder of my mid-to-late teens and early twenties — the years I felt the need to date someone of the opposite gender just so I could be accepted.

I find myself once again lying to the people around me.

I am making any excuse possible to steal an hour or two of privacy so I can sit down and write these blog posts.

I feel guilty again. My head feels heavy. And, I am getting angry when I read something I can’t publicly respond to.

Truthfully, since the moment I arrived here, I’ve felt a little sick to my stomach. All around me, I see reminders of the unfairness that Russia’s LGBT community faces.

Heterosexual athletes kissing their girlfriends or boyfriends at the end of their events. Couples walking through Olympic Park, holding hands and taking pictures together with shiny new venues in the background. Those I’ve traveled here with discussing how they’ve chatted up and met people on Tinder.

All of these regular occurrences wouldn’t even faze me back home … but here, they are amplifying and contributing to the anxieties and insecurities of my past. The saddest part is that I know this is all temporary for me. But this is the daily reality for Boris and so many others.

At the end of my conversation with Boris, I asked him if he had any Sochi advice for me. “Don’t hold hands or be gay in public because people here will think you are sick,” he said. “It’s not normal here, and it’s very dangerous for people like us.”

I paused for a bit and let some silence fill the conversation. I felt angry I couldn’t do more.

When I finally replied, all I could do was thank him for his time and remind him he was completely normal. I also told him that despite the circumstances, he could count on me as his first LGBT friend. He seemed happy and asked if we could talk again. I said yes.

As I was putting my computer away, I found a piece of paper I had left in my bag from the opening ceremony. I pulled it out and began to read. It was the speech by Dmitry Chernyshenko, the president and CEO of the Sochi 2014 organizing committee.

I read halfway down the page and then stopped at a specific line. I grabbed my yellow highlighter and took a picture. 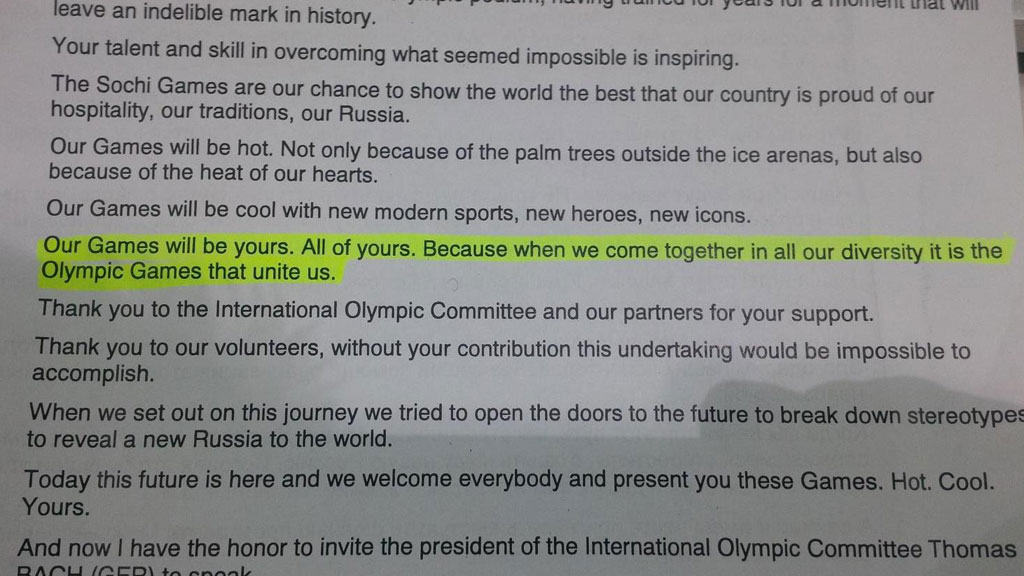 For the first time since being here, I went to bed seriously doubting the power of the Olympic Games.

Admittedly, I’m struggling today. It’s Valentine’s Day in Sochi and love* is all around me.

For the past few months, since Russia’s antigay laws passed and the world has been weighing in, most national delegations and the International Olympic Committee have been firm on one talking point: The Olympics are about sports.

Moreover, I’ve heard, read, and been told that this is neither the time nor place for politics, even though the halls of the IOC are littered with people whose positions depend on being elected by their peers.

Did I mention that this year, for the first time ever, the U.N.’s secretary-general was the keynote speaker at the IOC’s major meeting here in Sochi?

Was this an attempt by the IOC to seem more progressive in the face of massive criticism? Whatever the reason, it sure smells and feels like politics.

Now, about the asterisk I inserted above.

I used it because today was yet another reminder that my love — while the same — is ultimately treated differently.

Take a moment out of your day today and do a search for “kiss” and “Olympics.” Have a look. And, yes, the Tinder stories are true — it’s all the talk here in Sochi … and the media are now catching on. Dozens of athletes have told me they have profiles and are seeking conversations and hookups. Support-staff members have also mentioned it in passing, and within my own group, it’s definitely a popular topic.

I was hesitant to write about this, because I was worried my feelings and observations will be construed as a trivial complaint — another minority irritated by things others see as just normal.

I decided to write anyway.

The truth is that if I kissed my partner after winning a gold medal, or if the Olympic team I’m here with posted a photo of two men or two women kissing, it wouldn’t be called love.

It would be called political.

Previously in This Series:
Back in the Closet As the Games Approach
No Turning Back

About Last Weekend: When the East Is in the House