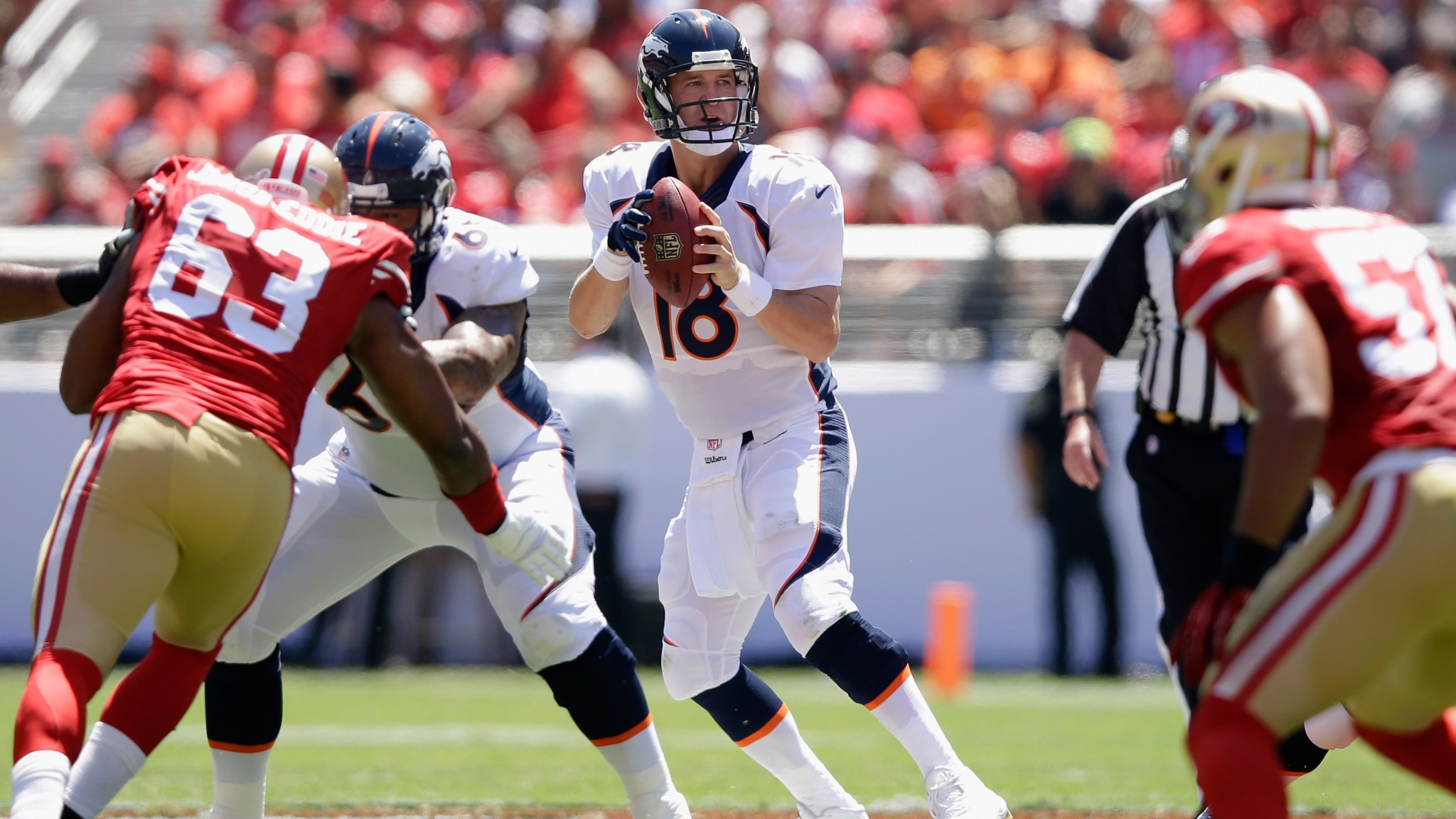 In case you were busy fighting for your right to dunk a football over a crossbar after scoring a touchdown, here are the top five stories you missed in sports last weekend:

In aren’t you glad I didn’t say Omaha:

Peyton Manning and the Denver Broncos have established themselves as the league’s preeminent preseason force after a 34-0 demolition of the San Francisco 49ers in the first NFL game at Levi’s Stadium. “That game fit me like a pair of jeans,” said Manning after the win. “Relaxed, very little contact from top to bottom, with just enough room in the back end to have some space to get some real work done.”

In things getting a little more interesting:

Things are getting frisky in the AL West, where the Oakland A’s and Los Angeles Angels now share a spot at the top of the division after Justin Upton and the Braves swept Oakland with a 4-3 win Sunday. “So one of the two best teams in the AL is going to have a one-game playoff, likely against Felix Hernandez?” asked Oakland general manager Billy Beane as he exhaled deeply and tucked into a pint of Ben and Jerry’s. “And only the winner of that one baseball game has the chance of having a successful season? That’s just so goddamn typical.” Beane then shook his head, cracked open a second pint of Ben and Jerry’s, and added, “I can’t even … I just … Talk to me after I’m done with this Cherry Garcia. I just can’t even deal with this right now. ”

In the best unpaid athletes:

Defending champion Florida State sits atop the AP college football rankings. The Seminoles are followed by Alabama and a trio of schools that are not from the SEC, then Auburn, two non-SEC schools, South Carolina, two more fraudulent non-SEC schools, Georgia, LSU, some schools that couldn’t cut it in the SEC, Ole Miss, a pair of total jokes that would have no business in the SEC, Texas A&M, two programs that are so far from the SEC they should join the NESCAC, Missouri, and … Washington. Washington? Over Florida and Mississippi State? Come on. I didn’t realize we got in a time machine and got out in 1990 when Washington still shouldn’t have been ranked ahead of anyone from the SEC. Where is the respect for the SEC in these rankings? What a travesty.

Philadelphia rallied late to beat Pearland, Texas, 7-6 in a Little League World Series game that saw burgeoning star Mo’ne Davis become the sixth girl to record a hit in the tournament’s history. “A girl? Playing b-b-b-baseball?” asked old-timey ghost Wilford N. Humswaggle as he haunted the old silo just outside of Williamsport. “Why in all my days o’ haunting I’ve never seen anything so irregular. It’s downright uncouth, it is! Baseball is for boys and that’s that.” It should be noted that Wilford N. Humswaggle is an old-timey ghost and, frankly, kind of an a-hole. People with opinions like his should be reminded they have opinions that align with an old-timey ghost who is kind of an a-hole.

In English footballing of the highest order:

“To my American friends who finally get football,

What a pleasure it is for me, Michael Caine, to be able to guide you through the opening weekend of the most Premier of all the leagues. The match that made the most headlines was a quite van Gaaling 2-1 loss for the Reds of Manchester. It’s a loss that I’m sure is leaving United feeling quite a bit divided, especially considering it came against the ugly Welsh ducklings of Swansea City. I mention ducks only to point out for my American friends who may not know that Welsh people do look very much like ducks. Faring better was Manchester City, who wear a shade of blue that I’m almost certain they were not feeling; they are the reigning kings of the Premiership, and by proxy England itself until the queen dies and presumably someone else becomes king. Perhaps that someone will be me. Michael Caine. Perhaps not. As a point of fact, I don’t understand my country’s royal lineage in any manner. I do know that on Sunday, City made Newcastle look like a castle as old as the queen herself in a 2-0 triumph.

Then there was Arsenal, who needed a late intervention from the duck-like Welshman Aaron Ramsey to keep their powder dry in what settled as a 2-1 victory over an absolutely shattered Crystal Palace. Also in a quite unseemly portion of London, the Spurs of Tottenham Hotspur had Eric Dier come to life late in a 1-0 win over West Ham that left Stewart Downing frowning. Some trivia for you film buffs: Stewart Downing was not considered for the part of Batman. His audition was apparently the opposite of the performance that Spurs strung together, one that could only be described as on par with those of the netballing Spurs of the colonies, if those Spurs were all but certainly doomed to miss next year’s Champions League entirely, assuming that’s how colonial netball works. As a point of fact, I don’t understand the postseason structure for colonial netball in any manner, and I don’t wish to learn new facts about it in the future.

On the Mersey, which for those of you who are unaware is how we refer to that festering inbound plague vector known as Liverpool, Raheem Sterling was a sterling Raheem in lifting Liverpool to a 2-1 win over Southampton, who had the misfortune of playing a team filled with their former players in a Nicolas Cageian Facing/Offing scenario. Some more trivia for you film buffs: I worked with Mr. Cage in a film called The Weather Man, about which I know nothing as I was given my lines in an earpiece so I would not have to spend my time learning them. Welshman Joe Allen also featured for Liverpool, and my word did he look like a duck. Staying with teams from that vile swamp port, your beloved and sometimes bearded American goalkeeper Timothy Howard will be needing a cold shower after conceding a late equalizer as Everton drew against either Leicester City or a bottle of Worcestershire sauce 2-2. Additionally, if you would like to suggest that Howard and shower don’t rhyme, then I would ask you if you’re Michael Caine. Are you? No? Then I would be pleased if you would not tell me what does and does not rhyme. Stoke and Aston Villa played football as well, probably, though the affair went generally undocumented like so many duck-shaped Welshmen pouring over the border. As a point of fact, I don’t understand anything about my nation’s immigration policy, and I don’t wish to learn new facts about it in the future. Furthermore, I find the notion of anyone being in Stoke so unappealing that I will conclude my wrapup there, without nary a mention of my beloved Chelsea, who will strangely be playing a man named Burnley later today.

Wow. I had no idea Michael Caine liked puns so much. Hopefully he or another notable British celebrity will be back next Monday with some more hot British takes on the Premier League.