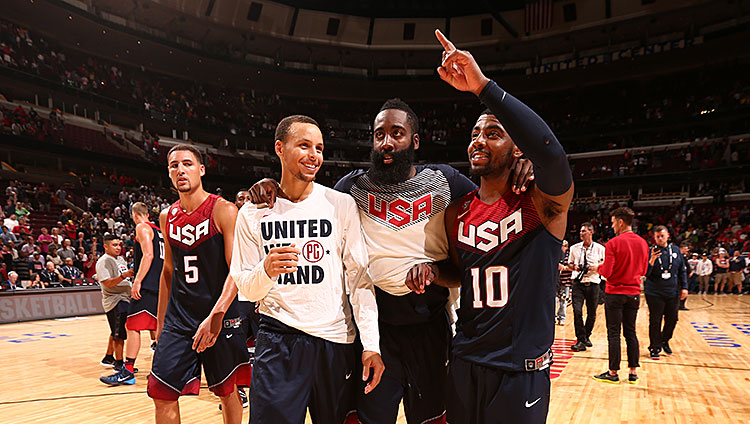 Narratives are often exaggerated, or even fabricated, to create interesting story lines, but the dark clouds hovering over Team USA were very real. If you did a Google News search on Team USA heading into their game against Brazil on Saturday in Chicago, all of it was sad on top of sad on top of sad — except for an ice bucket challenge.

Pre-Vegas, Team USA had already lost Kevin Love and Blake Griffin. Their Vegas camp was marred by the gruesome Paul George injury. And if all of that wasn’t enough, Team America suffered their biggest blow when Kevin Durant withdrew. What started as a fairly stacked squad for a FIBA tournament had turned into America’s JV team, scrambling to find some sort of identity.

With all of the summertime sadness lingering around this team, I wanted to see who would step up and become the American heroes that we need right now. I got my answers in some familiar and unfamiliar faces.

It took a total of two possessions for Faried to hit the deck, setting the tone early as Team USA’s “energy guy.” Derrick Rose, Anthony Davis, and James Harden immediately rushed over to help him up, out of respect for the hustle.

In the first half, Faried showed how important he is to this team. Obviously, he brings all of the Manimal hustle and size, but it’s how he interacts with players, on the bench and coming out of timeouts, that makes him so valuable. He is everywhere, on the court and off. A team like this, with the run of news they’ve had, needs an ultra-positive reinforcement kind of guy. So far, that’s all Kenneth Faried.

He’s the player with no Chicago ties who got the loudest ovation from fans. Even though Harden was a bit sloppy early on, he wound up with 18 points, just behind Davis. He brought it off the court, too. A death-defying alley-oop from Klay Thompson to Davis caused Harden to lose his mind at the scorer’s table.

Say what you will about his defense, but full-on, bearded, screaming James Harden is about as good as it gets. And, actually say this about his defense: BEARD was second in blocks and steals on Saturday night.

The U.S. bench had to hold each other back from celebrating too much when Steph Curry crossed up Marcelo Huerta and hit this silky-smooth step-back jumper directly in his face.

Hometown hero Anthony Davis got so much love from the Chicago crowd. The fans were salivating at the idea of Rose and Davis playing together. Here’s a sample of overheard dialogue from some totally reasonable Chicago fans:

Davis was responsible for the play of the game when he dove headfirst into the crowd. This triggered our very first big “U-S-A!” chant. It was a bit of a scary moment, though. THESE GOOSE BUMPS DON’T RUN.

Not seen: Anthony Davis returning to the sideline at a timeout, greeted by DeMarcus Cousins just shaking his head in admiration.

A quick glance around the crowd would make you think you were at a Bulls game, with all these red jerseys and Chicago influence. Local heroes like Scottie Pippen and Common were in attendance. Team USA came out to “All of the Lights” by Chicago’s own.

As they began announcing each USA player, I quickly realized that Derrick Rose was fourth in line. WTF is wrong with whoever chose the order? Didn’t they know this was Rose’s party and we were all just lucky to be here? Rose must be last. He must! Finally, a guy with some sense rushed to move Rose to the end of the line before the camera got to him. Real MVP.

The Derrick Rose pregame speech was a delight. As he approached the mic to address the crowd, some of the loudest “MVP” chants I’ve ever heard started in the United Center. Rose mouthed the words “come on” as he let it soak in for a bit.

I got chills. Shut up.

Rose was very into this game early on. Like the fans, he was not pleased with the team’s pick-and-roll defense, per the resounding F-bomb he let off after an early mistake.

At one point, Chandler Parsons stole the ball and dished to Rose from the ground. Rose missed a monster dunk that would have set the stadium to self-destruct. Too bad, because I was ready to lose my mind.

I eventually got my chance, with 4.8 seconds left in the first half.

Later on, he did D-Rose things:

So many encouraging moments happened on Saturday night. Team USA beat Brazil in pretty convincing fashion, Rose looked like the Rose of old, and Anthony Davis reminded everyone of his plans for world domination.

But it was the final moments of the game that really stood out. Everyone was on their feet — the players, the coaching staff, the trainers, the crowd — smiling, hugging, and celebrating. Until Saturday, there wasn’t much to celebrate. This team still has some questions, but I saw guys helping each other up, greeting one another out of timeouts, and celebrating like teenagers after a great play. It became clear this weekend that this was a united team that’s going to be very easy to support in a few weeks.