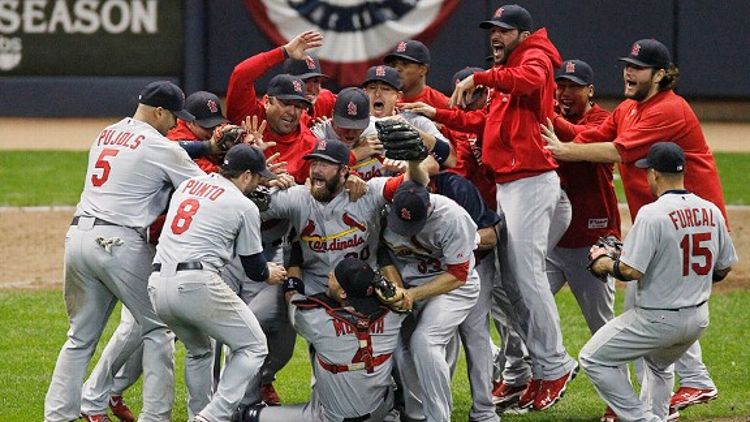 (It’s Monday afternoon. Two friends, Ricky and Steve, sit on a couch playing a video game. A third friend, Mitch, bursts into the room breathlessly. They’re all in their early 30s. Between the three, every possible race is represented.)

(The others turn around in alarm, while Mitch pants to catch his breath.)

Mitch: Did you hear? The World Series is set! The Cardinals blew out the Brewers last night in Game 6, and the Rangers did the same to the Tigers the night before!

Ricky: Dude, you’re going to “blow out” your lung if you don’t settle down.

Mitch: Real funny, Ricky. Seriously, why aren’t you guys excited about this? It’s the Fall Classic!

Steve: We watched the games, Ricky. And even if we didn’t, we have the Internet. We already know this stuff. What, did you just get a telegram? Did the pony express deliver the results?

Mitch: You know my wife won’t let me watch television or use the computer on weekends.

Mitch: IT’S A BEAUTIFUL GARDEN! THOSE PETUNIAS ARE THE ENVY OF THE NEIGHBORHOOD!

Ricky: Yeah, or like Tony Romo after Tom Brady and the Patriots overcame two interceptions to lead a game-winning fourth-quarter drive to beat Dallas 20-16.

Mitch: Why are you guys speaking so formally?

Ricky: Why … why are you so … whipped by your wife?

Mitch: Ahmad Bradshaw rushed for 109 yards and three touchdowns as the Giants earned a big victory over the Buffalo Bills, 27-24.

(The group begins to panic.)

Ricky: Let’s all calm down. Let’s calm down, gather ourselves, and remember what’s important.

Steve: But what’s important? What matters?

Ricky: It’s important that Mitch’s wife is a shrew who makes him plant seeds and water the dirt all weekend.

Mitch: ONE MORE FLOWER JOKE, AND I SWEAR TO GOD I’LL PUT A BULLET IN YOUR LEG!

Steve: Holy hell, man, why do you have a gun?

Mitch: Too long … it’s been too long. I come in here, you guys make your jokes about my wife, and I take it good-naturedly. No more, man. I’m feeling just like the Michigan State Spartans. Nobody gives them any attention, so they went out and beat rival Michigan for the fourth straight year, 28-14.

Ricky: Hey, just put the gun down. You’re right, you’re right … you’re Michigan State. Or you can be Oregon, who moved to 5-1 on the season with a 41-27 win over Arizona State despite missing LaMichael James.

Steve: Hell, you can even be the LSU Tigers, whose 38-7 win over Tennessee earned them the top spot in the first BCS rankings of the year.

Mitch: And hey, at least I have a wife. You guys can’t even get a date.

Steve: Not true, my friend. Not. True. You know the girl at the office I like? She and I are going to the President’s Cup next month in Australia.

Ricky: That’s a business trip, dude. Your boss assigned you both to the job.

Steve: We’re staying in adjoining rooms, Ricky! Things could get hot and heavy!

Mitch: You know Tiger Woods is going to be there, right? Fred Couples chose him with the captain’s pick. Greg Norman thought it was a bad idea. He would’ve given it to Keegan Bradley.

Steve: What the hell are you talking about?

Ricky: Yeah, man. Shouldn’t you be knee-deep in soil, being hectored by that bitter old harpy you call a wife?

Steve: Seriously, Mitch, your wife is 46 years older than you.

Ricky: You don’t relate to your wife, either, unless you collect Social Security every Friday and have fond memories of FDR.

Steve: To be fair, FDR was a pretty good—

Ricky: Oh my God, you shot me. You shot me in the leg.

Mitch: I promised you! I promised you I would! I love my aging wife! We’ll never get divorced, like Dodgers owner Frank McCourt and his ex-wife Jamie, who finally reached a settlement.

(Studio audience screams and hurries to leave the studio.)

Ricky: I’m done. My acting career is over. My leg is shot.

Steve: You’re like South Carolina running back Marcus Lattimore, who will miss the rest of the year with a knee injury suffered in Saturday’s win against Mississippi State.

Mitch: Shut up, Steve! I’m tired of speaking in sports blurbs! WHY DO WE ALWAYS SPEAK IN SPORTS BLURBS?!

Steve: Why did Kevin Durant say the NBA owners need to meet the players halfway in the ongoing labor dispute?

Steve: I can’t. I can’t stop any more than the Colts can stop their losing streak, which stands at six games this year after a 27-17 loss to the Bengals.

Ricky: Is there a doctor anywhere? Doctor!! Who the hell makes up a studio audience? There can’t possibly be a doctor here, can there? No doctor would ever come watch a sitcom. We’re going to die here.

Steve: Yeah … the messiah of tulips.

Mitch: Hey, that was pretty funny.

Steve: Thank you. That means a lot to me.

Ricky: Can nobody hear me?

(Laughter picks up, quiet at first. As Steve and Mitch join in, the laughter grows until everyone is roaring.)