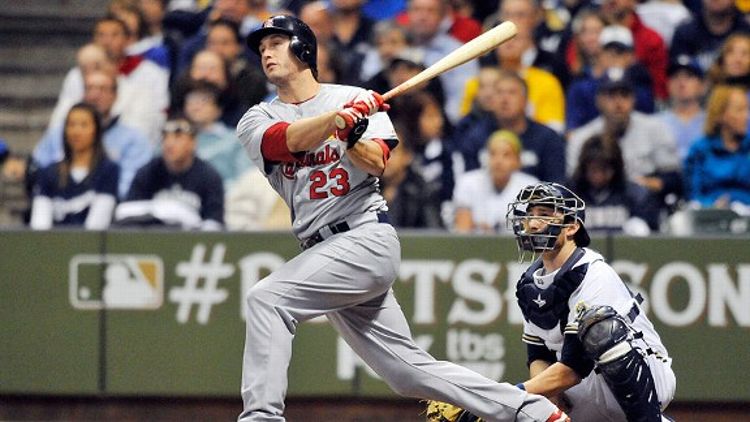 Let the numbers run through you like a bouncing ball through a Milwaukee Brewer’s legs.

In the wake of Texas’ 15-5 obliteration of Detroit and the St. Louis’ 12-6 whitewash of the Brewers, and a postseason that’s seen offensive records shattered and starting pitchers shelled, does this mean we now have a new model for how to build a team for playoff success?

Yes, watching the Rangers’ offense demolish the Tigers to get back to the World Series for a second straight year was an awesome sight. Every spot in the order contributed a hit during Saturday night’s explosion; seven out of nine delivered two hits or more.

There was Nelson Cruz, blasting his sixth homer against Detroit, setting LCS records for homers and RBI (13) after becoming the first player to blast two extra-inning homers in the same playoff series. Lightly-regarded David Murphy, who’d grabbed pine in Game 3 after a slow start to the series, reached base all five times up on Saturday, including a back-breaking two-run single in the decisive 3rd inning, after Jim Leyland pulled starter Max Scherzer. Michael Young, who went 3 for his first 29 against the Rays and Tigers, went back to getting love notes from admirers after stroking a pair of two-run doubles in that same 3rd inning. The Rangers stamped themselves as one of the most dominating offensive teams to grace the postseason in years, and that’s with Josh Hamilton posting a .311 on-base percentage and no homers through the first two rounds.

The Cardinals got some historic performances of their own in knocking off the Brewers in six games. Series MVP David Freese hit .545 with three homers and nine runs knocked in; the only player ever to match or top each of those benchmarks in a series is Lou Gehrig in the 1928 World Series against the Cardinals. Albert Pujols hit .476/.556/.913 against Milwaukee … and was deemed only the second-best hitter on his team. Matt Holliday, who missed the start of the postseason with a right-hand injury, went nuts in the NLCS to the tune of .435/.500/.652.

These performances by the two league champions would seem to challenge the notion that good pitching beats good hitting in the playoffs.

Not that all the pitching was bad. As we’ve mentioned numerous times in the past two weeks, these playoffs have been a story of bullpens. The Rangers, fortified by their deadline acquisitions of Mike Adams and Mike Gonzalez (Koji Uehara has been pretty bad) and step-up performances by Neftali Feliz, Scott Feldman and Darren Oliver, choked the life out of many would-be rallies in the first two rounds. The Cardinals, who sported one of baseball’s worst bullpens early in the year when the ancient duo of Ryan Franklin and Miguel Batista pitched the team’s late innings, now trot out a parade of live arms, with flame-throwing closer Jason Motte fronting a group that includes homegrown talents Lance Lynn and Fernando Salas, and deadline pickups Octavio Dotel and Marc Rzepczynski. Ron Washington, mocked last post-season for his sometimes preposterous bullpen handling, repeatedly pulled starters early and made frequent middle-inning changes, with just about every move working out perfectly. Tony La Russa, the godfather of revolving-door bullpen techniques that so many managers use so liberally today, has outdone himself this October, often yanking his own starters early and letting his anonymous bullpen corps do the heavy lifting.

The rise of the bullpens and diminished importance of starting pitching success this postseason would seem to challenge the notion that two dominant starters are the key ingredient for a long playoff run.

Except it’s only one year. In 2010, we constantly heard about the importance of dominant starting pitching, and for good reason. Tim Lincecum mowed down hitters all the way through last October, his 14-strikeout, two-hit shutout against the Braves in the NLDS ranking as one of the best playoff performances of our lifetimes. Halladay pitched a freaking no-hitter against the Reds. The two World Series combatants were led by a hired gun in Cliff Lee who almost single-handedly knocked off the Rays, and a Giants team with a shaky lineup and a rotation that complemented Lincecum with Matt Cain, who gave up a grand total of zero earned runs in his three playoff starts.

We can’t claim now that hitting and great long relievers trump all other factors in leading a team to the World Series, just as we couldn’t claim then that you can forget about fielding a potent lineup, so long as you have a couple of great starters.

So let’s salute the Tigers, their ace Justin Verlander, their star slugger Miguel Cabrera, emergent number-two starter Doug Fister, unlikely playoff hero Delmon Young, and the many other players who gave Detroit a reason to cheer. Let’s tip our caps to the Brewers, the gutsy trades they made to upgrade their rotation, the great seasons turned in by Ryan Braun and Prince Fielder, the roller coaster ride that was Tony Plush, possible final games for Fielder (as a Brewer) and Craig Counsell (in his career). We pray that their fans never again witness Yuniesky Betancourt giving up on a 22-hopper during an elimination playoff game, or the rest of the Milwaukee defense that did them in the last two games of the season.

Then let’s get ready for a World Series that could rank as one of the biggest offensive shows in the sport’s history … or not. Every time you think you’ve got the game pegged, everything changes. That’s what makes baseball so much damn fun.