About Last Night: Tiger’s Back 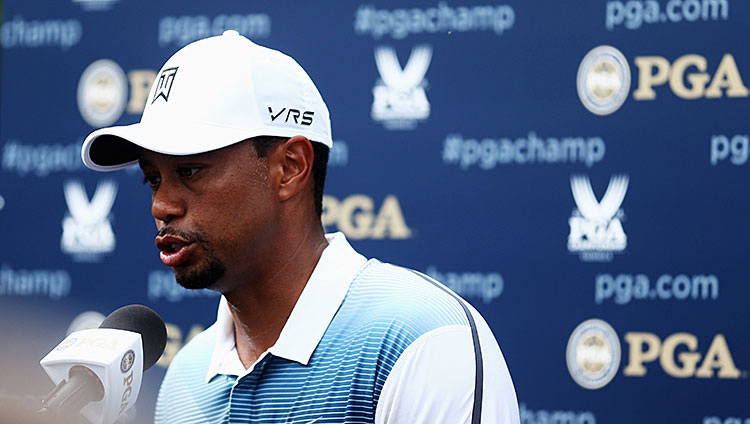 In case you were busy gently and respectfully chiding Hunter Pence, here are the top six stories you missed in sports on Wednesday:

In a World Series rematch of sorts:

Xander Bogaerts’s ninth-inning sac fly gave the Boston Red Sox a 2-1 win over the St. Louis Cardinals. And while a midseason win for a sub-.500 team playing against a wild-card contender is usually “less than news,” this particular win came a year after the Red Sox beat the Cardinals in the World Series and 10 years after they won their first World Series in 86 years, again over the St. Louis Cardinals. So this loss for the Cardinals is not just a regular loss. It’s another in a long line of cruel reminders to Larry Walker that somehow, out of all the key figures on that historically great 2004 Cardinals offense, he is the one who failed to win a ring in his career. Pujols? Ring. Rolen and Edmonds? Yup, rings. Edgar Renteria? Duh. Yadier and Matheny both have rings. Even Tony Womack and Reggie Sanders have rings. So today, spare a thought for poor, poor Larry Walker, lest his fluky failure to win a World Series be lost to the sands of time.

Injured Rockies shortstop Troy Tulowitzki continued to stoke rumors that he could force his way out of Colorado, saying, “I’m sick and tired of losing.” Tulowitzki then added, “And don’t just run out and beat down the Cubs or something. I’m talking about real wins against real teams.” But it was too late, as Colorado had already beaten the Cubs 13-4.

Landon Donovan netted the winner as the MLS All-Stars came from behind to beat Bayern Munich, 2-1, in the MLS All-Star game in Portland. Video of the immediate aftermath of the match suggests that Bayern manager Pep Guardiola took the loss surprisingly hard:

We can see Guardiola here, hastily putting on his Portland uniform of a plaid shirt and slacks, and refusing to split an Uber with Portland Timbers manager Caleb Porter. Later, Porter texted Guardiola to see if he wanted to go down to Pok Pok so the two could “settle our differences over some really authentic Thai food. I mean really authentic. This isn’t the pad Thai you get in the rest of the country. This is the real stuff from up north. Really authentic flavor profiles.” However, Porter got no response, as Guardiola had already blended into the city, met a “poet/crepe artist” at a bar on Hawthorne, and decided it would be best to see where the evening took him.

Tiger Woods will play in this weekend’s PGA Championship, after making it through a nine-hole practice round at Valhalla Golf Club without suffering back pain. When asked why he decided to risk reinjuring himself to come back, Woods bellowed, “Most great heroes enter Valhalla only through death. I shall not disrespect the Norse gods both old and new by refusing to play in their tournament! I shall play! I shall play!” When told that one can become a member at Valhalla by paying a membership fee, he struck down his questioner with a 3-wood and said, “I hope Odin smiles upon your soul, blasphemer.”

Nationals manager Matt Williams dismissed suggestions that he was considering sending outfielder Bryce Harper down to the minors in the wake of a prolonged slump, saying, “It’s not fair to the kid … to even think about sending Bryce Harper to the minor leagues.” When asked what his plan was, Williams replied, “I think we just need to wait for him to shake off the rust after his injury. I expect Bryce will be back at his best soon, at which point I’ll start benching him for not playing the game the right way.”