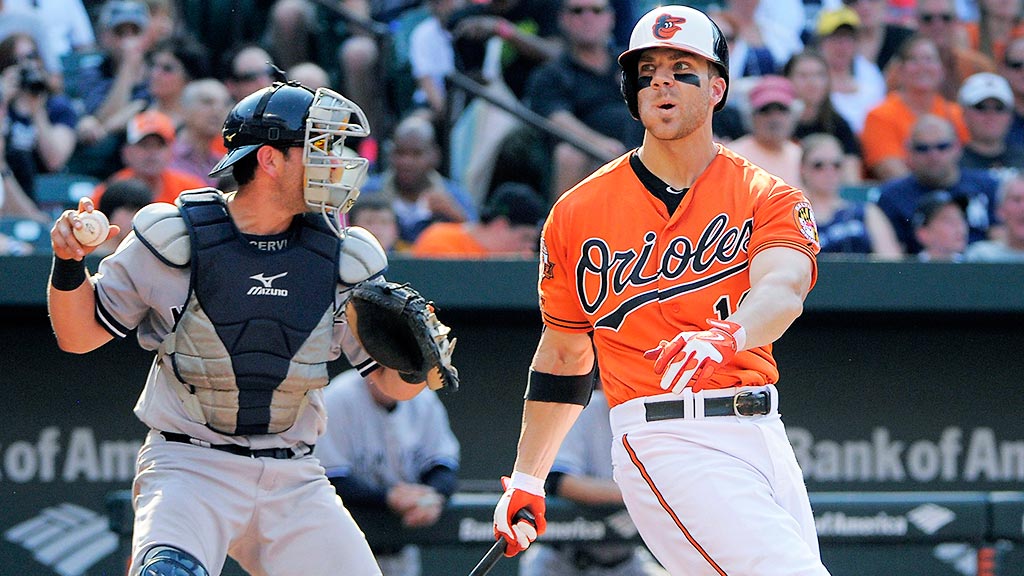 I’m told there are people who suffer for fantasy baseball’s sake. I wouldn’t know, because through a combination of my own cunning and the fact that Jonah Keri and Ben Lindbergh aren’t playing, I’ve been in first place in Grantland’s fantasy baseball league pretty much all year. [Editor’s note: We look forward to mercilessly mocking Michael when he’s unseated in the first round of the playoffs. Such hubris!]

But the others? Those down there in the untouchable castes of the standings? They suffer, afflicted by injuries and hamstrung by bad luck and slumps. I don’t advocate getting all bent out of shape over fantasy sports, but it’s understandable if the opportunity cost of having drafted Matt Wieters in the 15th round instead of Devin Mesoraco in the 24th has hurt you dearly in the standings, particularly if there’s money or significant bragging rights involved.

Injuries are bad enough, but having someone you drafted to carry your team put up a dud of a season is even worse.

Anger can be harmful if it’s not channeled into something constructive, so in the interest of everyone’s safety and sanity, let’s explore three particularly painful fantasy flops and figure out how to get the ensuing aggression out of our systems.

I believed in Davis’s age-27 breakout last year. To a certain degree that was against my better judgment, but the power had always been there, and I figured that if Davis had solved his swing-and-miss issues even a little, he could match Ryan Howard’s late-twenties production even if he never hit 50 homers again: lots of home runs, lots of walks, and a slow decline from MVP candidate to reliable fantasy player.

Suffice it to say, I did not expect Davis to be hitting below .200 in August, or for teammate Steve Pearce to be out-slugging him by 115 points. Here’s a real boot in the swingers: Rajai Davis and Khris Davis have been more valuable than the Orioles first baseman. There have been times this year when Chris Davis’s owners would have been better off with Ike Davis in their lineup, which is a chilling thing to say about a guy who finished third in AL MVP voting last year.

How to Channel Your Anger: Bake 131 chocolate cupcakes with orange frosting (you know, Orioles colors), one for each time Chris Davis has struck out this season. Go see The Fault in Our Stars and eat every one of those cupcakes before the movie ends.

Because OBP is his party piece, Choo’s one of those players who’s always been a better real-life player than a 5×5 fantasy player. With that said, he’d been pretty dependable in fantasy circles as well: From 2009 to 2013, he averaged 139 games played, 80 runs, 17 home runs, 19 stolen bases, and a .288 batting average. Not sexy numbers, but dependable all-around numbers. Most thought that Choo, who was a monster last year in Cincinnati while hitting atop a loaded lineup in an easy ballpark, would do the same in Texas, where he’d hit atop a loaded lineup in an easy ballpark.

In reality, those who drafted Choo could have gotten equivalent value from Dodgers middle reliever J.P. Howell, or better value from 75 other major league outfielders.

That’s not all Choo’s fault. This seems like a good time to talk about Jurickson Profar, Prince Fielder, and the other stricken Rangers who’d be driving Choo in if (1) they were healthy, and (2) Choo’s batting average hadn’t fallen nearly 50 points in one season. I don’t think it’s appropriate to get mad at someone like Fielder or Bryce Harper or Joey Votto, because they can’t control if they get hurt, and though Choo is healthy, he’s inarguably suffered from Texas’s injury woes.

I can’t imagine that Choo’s having a ton of fun slugging .363 for a last-place team, and I’m sure he’s probably doing the best he can. Though in a way, that’s even more depressing.

How to Channel Your Anger: Purchase an electric guitar. Teach yourself to play an Aerosmith song. It doesn’t matter which one — any Aerosmith song will do. When your neighbor hears you playing Aerosmith, he will come to your house with the intention of murdering you. Fight your neighbor until one of you submits or dies.

There might not have been a worse pitcher to have drafted high. At least Masahiro Tanaka, Cliff Lee, and Jose Fernandez pitched well at some point, teasing us with brilliance before getting hurt. Verlander, the man I’d have called the finest pitcher in Christendom a mere 24 months ago, has taken the mound every fifth day and been worse than Sam Deduno. Verlander hasn’t been completely without value, because 150 below-average innings are still a boon to any starting rotation and Verlander hasn’t been so far below average that the Tigers have needed to send him to the minors or the bullpen. But with his strikeout rate down by about a third, Verlander hasn’t been playable from a fantasy perspective.

Maybe the complications from hernia surgery that Miguel Cabrera hinted at is still bothering the erstwhile ace. Maybe, at 31 and after nearly 2,000 major league innings, Verlander’s going the Jack McDowell route rather than the Steve Carlton route. Maybe there are darker forces at work. I don’t know. All I know is that if I’d spent a mid-40s pick on him (and possibly earlier if I’d been of the opinion that he’d rebound this season) instead of Madison Bumgarner or Zack Greinke, I’d want to knock down a building.

How to Channel Your Anger: I had the impulse to blame Kate Upton for this, but I don’t think she’s got anything to do with it. Instead, go into your yard and build a city out of sticks and branches. Imagine a thriving civilization of tiny people living there, going about their lives, oblivious to how bad Verlander’s been. Then light the whole damn thing on fire.

About Last Night: Tiger’s Back