About Last Night: Return of the Big Dog 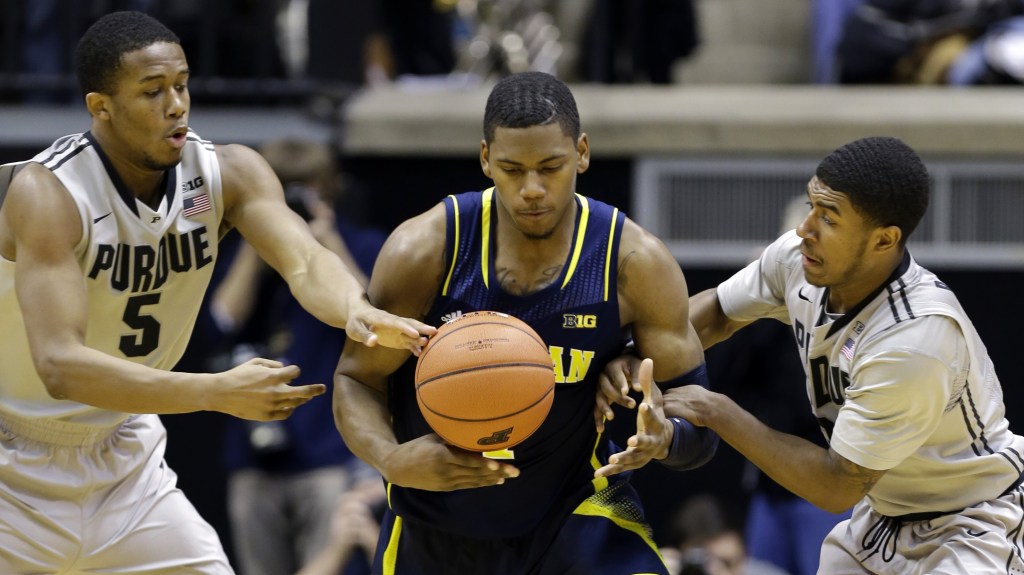 In case you were out booking a flight to Florida after realizing you totally forgot to report to spring training, and you are Detroit pitcher Justin Verlander, here’s what you missed in sports on Wednesday:

• Glenn Robinson III drained a game winner to top his famous father’s alma mater as Michigan beat Purdue, 77-76, in overtime. When asked if he thought he could claim his father’s Big Dog nickname after draining the shot, Robinson III shook his head and replied, “No way. I don’t even want to be a big dog. I want to be a normal-size dog. Like a real cute one. Like Obama’s dog. What kind of dog does Obama have?” When told that President Obama has a pair of Portuguese water dogs, Robinson smiled and said, “Yeah, man. I want to be known as the Portuguese water dog. ’Cause I’m always draining shots. And I really like seafood. I assume they eat a lot of seafood in Portugal.”

• Marcus Paige poured in 35 points as the North Carolina Tar Heels continued their resurgence with an 85-84 overtime win over NC State. “What can I say?” said dejected Wolfpack star T.J. Warren, who had 36 points in the loss. “They’re better than us. Of course they are. They’re North Carolina and we’re NC State. They win, we lose. Because we’re losers and we’ll always lose. Time is a flat circle.” And while Warren’s comments would seem hyperbolic in the moment, the pattern would repeat itself throughout his life.

• In another massive Western Conference tilt, the Los Angeles Clippers held off the Houston Rockets to win, 101-93, at Staples Center. “It should be I tilting massively in Staples Center,” whispered injured Lakers guard Kobe Bryant to no one before turning to look out his window, which was soaked with the rain of a rare Los Angeles downpour.

• The Miami Marlins beat the University of Miami, 5-2, in the Marlins’ first spring training game. “That’ll show people who say we’re worse than a college team,” said some member of the Marlins that no one has ever heard of. “I mean we have a number of household names. Stanton, Fernandez, Saltalamacchia, me,” added the man who may well have been found on the street before the game. Oh wait, never mind, that was Rafael Furcal! What the hell is Rafael Furcal doing in Miami?

• Real Madrid blew Schalke 04 out of the water in Champions League play, winning 6-1 behind braces from Gareth Bale, Cristiano Ronaldo, and Karim Benzema. “We’re all buddies!” Bale said to his fellow goal scorers after the match, as noted Frenchman Benzema sucked down a Gauloise and Ronaldo gazed longingly at a picture of himself taken years earlier. “Wanna get some paella? We can go out, get some paella, and then some spicy hot cocoa! It’ll be so fun guys! Like when we were kids!” Ronaldo did not take his eyes of his own image as Benzema turned to Bale and told the Welshman, “I never was, as you say, ‘a kid.’ I have always been the same cancerous sack of organic matter and to what end? To take up more space in the universe? As if the universe were as we perceive it.” Bale smiled at his teammate and said, “So, no spicy hot cocoa?” only to watch Benzema drag so hard on his Gauloise that he disappeared completely. Unfazed, Bale turned to Ronaldo and said, “So, just you and me on paella duty, eh Chrissy?” Ronaldo did not turn his gaze from the image of his younger self and whispered, “Yes. Just you and me. Forever.”

• The Philadelphia 76ers bought out the contract of recently acquired forward Danny Granger, who now finds himself with a number of playoff-bound suitors. When asked why he let Granger go, 76ers general manager Sam Hinkie said, “Well, Danny’s a hard worker, a pretty good offensive weapon, a veteran presence who won’t let his team lose.” When asked if there was a “but” coming to explain Granger’s departure, Hinkie replied, “Like a person’s butt to fill the roster space? Sadly no. We’ve looked into signing portions of people and just throwing body parts onto the floor, but the CBA just doesn’t allow it.”

• Angels superstar Mike Trout set a pre-arbitration record, signing a $1 million one-year contract for the upcoming season. Despite the record, that number still leaves Trout projected to be underpaid by a margin equal to the sum of the annual salaries of Josh Hamilton and Vernon Wells. Convenient, Anaheim. A little too convenient.

• Flash forward to mid-March: Marcus Paige’s Tar Heels would bump the Wolfpack out of the ACC tournament on yet another buzzer-beating winner. Then forward again, when Paige would be drafted ahead of T.J. Warren. The two would meet in the Western Conference finals in 2018, and Paige, who would have carved out a starting role while Warren was coming off the bench, would hit the clinching shot in the sixth game of the series, sending Warren home early. When Warren got home he would find that his wife had left him a note, saying she was leaving him for a better man. When he learned that man was Paige, it would send Warren spiraling into a deep depression that would cost him the better part of his athletic prime. He would, however, pull himself out and start his own business, selling refurbished classic cars in North Carolina. While Warren’s business was profitable, it was Paige who would be elected to the state’s senate in 2033. Once in office, he would sponsor sweeping environmental legislation that would ban all non-electric cars from the state’s roads. When the legislation passed in 2034, Warren’s business quickly cratered. Broken again, Warren would be approached by ESPN for a retrospective on Paige’s astonishing political career, only to refuse an on-camera interview, saying only, “Time is a flat circle.”