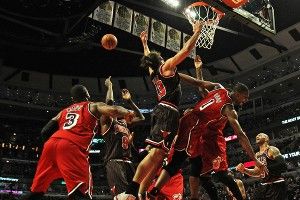 In case you were busy realizing that you waited way too long to make that Harlem Shake video, here’s what you missed in sports on Thursday.

February 21, 2013
NBA Deadline Day, time to get traded.
Am I sad, or am I elated?
Look at Josh Smith, he didn’t get dealt,
Unlike Jordan Crawford, who now is a Celt.
Look at the truth, and look at the pain.
Will they trade J.J.? Are they insane?
And what of all the skill that I gain(ed)?
My D that developed, my thickening frame?
What is the cost for a man like me?
Where will I end up? Who will I be?
Time to get the call, time to see.
No more time, time moved quickly.
Wisconsin. The Bucks. Milwaukee.
Milwaukee, for me is a city of dreams.
Place in Wisconsin that has lots of teams.
North of Chicago, but south of Green Bay
Basketball is the game that I play.
And also life, I play that game hard.
Overcame hardships, been called a coward.
Had to spend so much time with Dwight Howard.
Seriously, so much damn time with that dude.
Guy wasn’t funny, guy was just rude.
But enough of the Magic.
No more time for stuff that is tragic.
No more talk of Dwight.
For the Bucks I must fight.
For the almighty dollar.
God told me to holler.
Oh, wait, I guess Buck means deer.
A male beast that guys fear.
Hoofs on my feet. Antlers on my head.
Run too fast, hunters can’t shoot me dead.
NBA Deadline Day came and then went.
And for me, no doubt, the day was heaven sent.