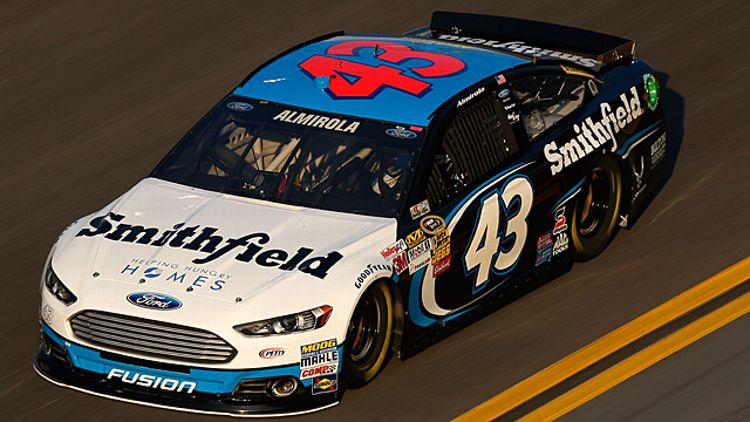 Aric Almirola earned more than $4.7 million during the 2012 NASCAR Sprint Cup Series, winning the pole at the Coca-Cola 600 and driving the no. 43 Ford car to top-10 finishes in two of the year’s final four races. The 28-year-old, who was born at Eglin Air Force Base in Fort Walton Beach, Florida, and is sometimes called the “Cuban Missile,” drove well enough in his first full season in stock car racing’s biggest tour to land himself another year with Richard Petty Motorsports. He credits part of his success to an unusual pastime: bike riding, which he picked up three years ago and he believes prepares him for the rigors of flying around a track at 150-plus mph for hours at a time.

“The cardio standpoint of getting on a bike and riding for two, three, four hours simulates so much of what we go through in the car. And also, the heat. I love to ride my bike in the dead middle of the summer when it’s 105 degrees outside because it’s so much like being in my race car. Your heart rate’s up. You’re sweating to death. And that is exactly what we deal with in the race car,” he says over the phone. “[Racing is] not tremendously physical, but it’s very cardio and it’s very hot inside our cars. It’s important for your body to learn to stay hydrated and to not lose all your electrolytes. Being on the bike in the middle of the summer helps me focus on my hydration and staying focused when I’m hot, tired, sweaty, and completely miserable.”

Sammy Johns, RPM’s director of operations, describes the training practice more simply. “They are sitting in 120-, 130-degree heat,” he says while driving the team’s RV down to Daytona Beach, Florida, where Almirola and teammate Marcos Ambrose will contest the Daytona 500 on Sunday. “It’s just like they are running marathons.” Johns frequently accompanies Almirola on rides during the season, either outdoors or on the trainers they store in the support vehicles. (He also recently ran a half marathon with his driver.)

Almirola, however, initially didn’t start bike riding for fitness; he did so because a few of his friends back home picked up mountain biking and he thought it looked like fun. He took to the sport and the competition between buddies. “It’s fun to push hard and make your friends suffer. I enjoy that when I’m on the winning end of it,” he says. “I don’t like it when I feel like I’m dying to keep up. That just makes me go out and train harder.”

But Almirola also quickly realized biking might improve his driving, too. “Our local park had three six-mile loops and the first few times that I went, after doing one loop, my tongue was hanging out and I was dying. I realized it was a great way to stay in shape, to build up my cardio and my stamina,” says the racer whose Twitter avatar features a picture of himself and Richard Petty holding up a cardboard sign that reads “Will work for ham, bacon, or pork.”

After a few months on the trails, Almirola added a racing bike to his growing collection of two-wheeled vehicles and took to the streets. He says he rode a couple hundred miles a week last summer between car races, time trials, and meetings, averaging 20 or 21 mph. A few members of the RPM team sometimes come along on rides. The driver won’t find himself in the Tour de France anytime soon, but he’s not bad. “He’s a better race car driver. That’s what he does for a living,” Johns says. “But he’s no slouch on the bike, either.”

I ask Almirola if there’s a comparison between fit drivers and early-career Tiger Woods. Is it possible that racers, like golfers, can get away with being overweight or not in shape but benefit from working out and focusing on their bodies?

The driver — and biker — agrees. “You don’t have to be the most physically fit person in the world to drive a race car fast, but at the end of a 500-mile race, it’s as important as ever to be able to run your fastest laps at the end,” he says. “It doesn’t pay anything to be running fast at Lap 100. It pays to be running fast laps at Lap 500.”

Later, Almirola continues on the same theme. “There’s a huge advantage between closing out the race at the top of your game and surviving the race. I’ll be honest, probably four years ago at certain races and at certain race tracks I was merely surviving to get to the end of the race,” he says. “Now, with my workout routine and riding my bike, there’s not a single race where I have to survive to get to the finish. I get out of the car, and sprint to my motorhome to change, then go catch the airplane to get to the next race. I’m in the best shape of my life, and a lot of it is due to cycling.”