Going Under the Dome 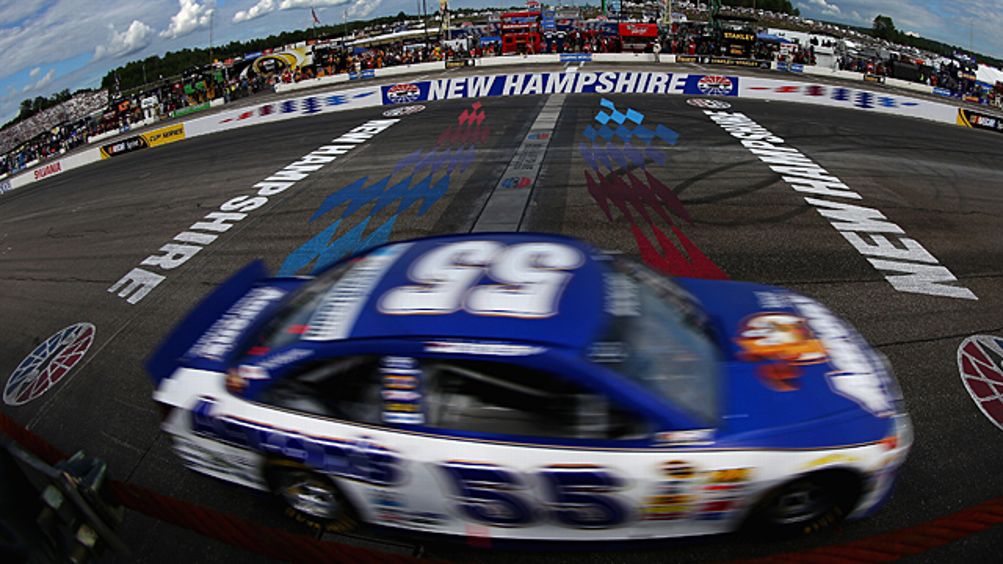 Once, a long time ago, I went to one of the last races held at North Wilkesboro, the old, rickety, swaybacked stock car track in North Carolina that was the home course for, among other people, Junior Johnson, one of the original back-road renegades and — if you believe Tom Wolfe — the Last American Hero. During my stay there, I sat with Junior in his garage while he worked on a tractor; we talked about NASCAR, the multimillion-dollar entertainment complex that had grown out of what he and the rest of them had done first as avocation, one that paid what amounts to pennies on the dollar today. Junior was particularly baffled by the different places to which his sport had expanded. “New Hampshire?” he said, and he sounded like he was talking about East Timor.

Nonetheless, as we have discovered to our overall delight, and our occasional horror, there is shitkicker culture salted across the American landscape. As it happens, when NASCAR outgrew North Wilkesboro, it handed one of the old track’s racing dates to the New Hampshire Motor Speedway, just up from the old Shaker Village as Route 106 winds through the pines. It found an audience almost immediately, and the circus came to town again last weekend, culminating in Sunday’s Camping World RV Sales 301, a stop on the NASCAR Sprint Cup series. (And yes, things get so sponsor-thick around NASCAR events that just typing the name of the race — and describing the cars in it — is like putting together an advertising circular for some big-box store in Indiana.) It was a hot, grumpy race — cars sliding on slick tires as the sun came up and heated the asphalt of the track — interrupted 12 times for caution flags. Later, in interviews, Kyle Busch took an oblique shot at Juan Pablo Montoya — “We know what he’s about,” in reference to some bumping — and, after Kurt Busch and Ryan Newman took each other out on the 224th lap, Newman not only got testy about the collision, but seemed to be hinting at some additional fun later in the season. “It’s just a lot of disrespect for a bunch of guys on restarts,” Newman said. “But what comes around goes around. I know who hit me.”

The race was choppy. It was a scramble from yellow flag to yellow flag, and Brian Vickers won it with a late charge, and by deftly maintaining his advantage during the last restart of the day. It was a body-shop kind of afternoon, a day for dented fenders, and for trading enough paint to get Sherwin hating Williams, and for cars rolling into pit road with pieces of metal hanging off them at odd angles. In short, the New Hampshire track is a little bit of North Wilkesboro dropped into the foothills of the White Mountains.

It is a mile around, with tight turns — a “paper clip,” as some drivers call it — and it makes for a good deal of mixing it up in very tight spaces, especially when the tires get greasy. (Because the race is only 301 miles, there is a great temptation for drivers to go a long time between pit stops, taking chances on worn tires and on how much fuel they can conserve, both of which came to matter a great deal Sunday, as we shall see.) This is old-school NASCAR in what once would have been a foreign place. It is a new race in which the cars, and the people who drive them, can come out of it a little older and a lot more dinged up. You can sit in the luxury suites here and still smell the moonshine from long ago, and far away. 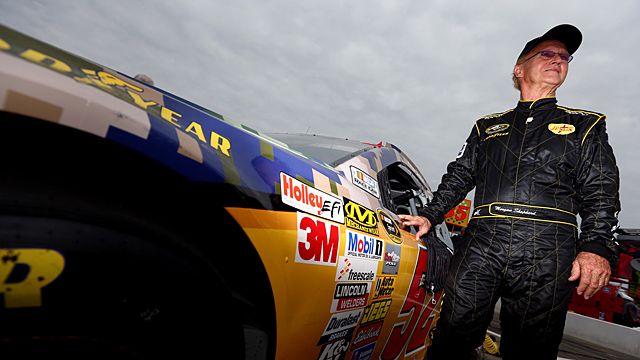 At the end of his afternoon, Morgan Shepherd hung around in the cool precincts of the infield garage. He had not won, but he had not expected to win. He hadn’t won a race on this circuit since he won in Atlanta in 1993. He did not run at the front of the field, but he had not expected to do that, either. He had not even finished 100 laps and, if he would tell you the truth, he also probably had not expected to finish that many at all. Not that he didn’t sound like every other driver who didn’t win Sunday. He lifted the brim of his battered cap, looked across the way at his car as they were packing it up, and he talked about the things that went wrong in just the same way that all the other drivers do.

“We had a great engine,” Shepherd said. “But the front end of the car just got to bouncing up and down. There was just something off on the chassis and it made the car hard to turn. Of course, we didn’t have a chance to test it on the track or anything.”

But starting the race was his best moment. By starting the race, Morgan Shepherd won. He is 71 years old. He first raced on a NASCAR track at about quarter past the first Nixon administration. Sunday, as he roared past the starting line — and even the lowliest stock car roars the first time it comes around the grandstand — he became the oldest person ever to start a Sprint Cup race. When he began racing, NASCAR hadn’t discovered yet that there were pockets of high-octane yeehawing all over the country. They didn’t run races in Vegas or, heavens to Cale Yarborough, New (by God!) Hampshire. They ran on tracks like the Hickory Motor Speedway and the Asheville-Weaverville Speedway, and North Wilkesboro. “They had Daytona,” said Shepherd, who also drives on the Nationwide circuit. “But the rest of them were places like that.

“It was a big moment today. I guess it’ll go down in history. But it was more for the racing fans because they’re the ones who have made it all happen for me. I’m just doing this to encourage people to get on with their lives and do what they love, the way I’ve been doing it for 46 years.”

Shepherd came into the race on Sunday as something of a transient, parking his trailer on the NASCAR equivalent of poverty row. He managed to cadge a spot with Brian Keselowski Motorsports, and cobbled together enough money to get into the field. His car didn’t even have a “cool box” — the kind of in-car air conditioning that’s a necessity when running on asphalt in the high summer. He ran his 92 laps and left the proceedings to the younger guys. He stayed near the garage, where there was some shade, looking in his dark khakis and his cap like nobody more than Red Buttons, who was still a popular comedian when Morgan Shepherd started racing cars, if Red Buttons ever had visited Sam Drucker’s store. He watched the other cars scream down the backstretch, driven by young hot shots who never saw Hickory or North Wilkesboro.

“Some of the middle guys, like Tony Stewart, they like to hear about the history of it,” he said. “But the real young guys? They’re not interested. They’re video people.” Morgan Shepherd then said thank you, and disappeared into the dark cool of the garage, and he looked very much like a man at home. 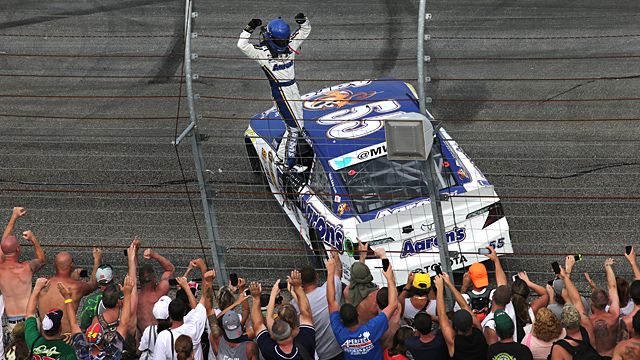 Brian Vickers came around, finally, to win the thing, pushing past Kyle Busch on the 282nd lap to move into second place, and then going past Tony Stewart into the lead five laps later. The only real peril he faced thereafter came at the very end of the race, when they came out of a caution on lap 301 and Vickers was dueling with both Kyle Busch and Stewart, with Jeff Burton lurking a little ways back. (Stewart, however, was nearly out of fuel and wound up the race dry, puttering down the backstretch and finishing 26th.) Vickers was riding worn tires and wary of what could happen when the green flag dropped.

“It was nervous,” he said. “Old tires, wheel spin — you never know what can happen here.”

Burton made a bit of a dash, but Vickers made a sharp countermove, cutting him off and pulling away for his first Sprint Cup win since 2009, but Vickers has lived a saga since then. In 2010, he was struck down by a blood-clotting disease, which threatened his life. During his illness, Vickers lost his ride and had to come all the way back to get a part-time gig with Michael Waltrip Racing, sharing the driving with Waltrip and Mark Martin. It seems very unlikely that he will be splitting the duties next season. “Obviously being able to win after all that is just almost unimaginable,” said Vickers. “It’s so beyond what I was thinking about in that moment; just getting back into a race car was all I could think about.” That was old-school stock car racing brought here into the green hills — a sport for dinged-up cars and the dinged-up people who race them, with its roots in a part of the country that it has wildly, sadly, outgrown.