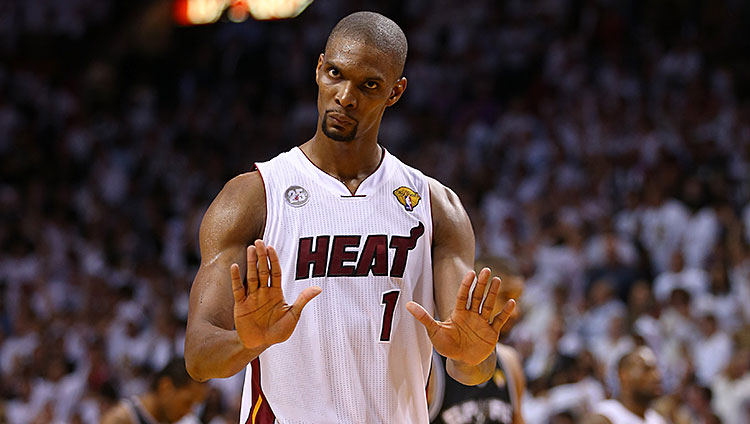 In case you were busy explaining to LeBron James that losing him was the biggest mistake you’ve ever made, here are the top five stories you missed in sports on Monday:

The Cleveland Cavaliers organization believes that LeBron James is considering an offer to return to the Cavaliers on a max contract. I find this waffling from James on his future fascinating and would love to see an hour-long documentary about the process he uses to decide which team to choose, culminating in a dramatic announcement in which he reveals the location he has settled on for his talents. If I were a higher-up at ESPN, I would make sure my network broadcast this process of deciding in a show titled The Process of Deciding. But that’s just me.

Meanwhile, in Houston, Chris Bosh is mulling over a max-contract offer from the Rockets that would break up the Big Three. I find this waffling from Bosh on his future less fascinating, but would love to see a weekly hour-long reality show about the process he uses to decide which waffles he likes to eat, and how he likes to eat them. If I were a higher-up at ESPN or frankly any other major network, I would make sure we broadcast Chris Bosh making weird decisions about waffles every week in a show titled Bosh Waffles. But that’s just me.

One thing is for sure on the NBA free-agency merry-go-round: Josh McRoberts will be a member of the Miami Heat for the next four years, after agreeing to a deal that will take up the team’s entire midlevel exception. I find nothing about McRoberts as a basketball player particularly fascinating, but I would love to see an ongoing reality show in which the flowingly coiffed Duke player finds himself forced to publicly play rhythm guitar in a Lynyrd Skynyrd cover band, despite never having previously played the instrument. If I were a higher-up at MTV, I would make sure my network broadcast this personal nightmare of McRoberts’s in a show titled Heat Home Alabama, which would be paired with an identically premised show starring teammate Chris Andersen titled Caged Bird.

In keeping it West Coast casual:

It was another banner day in the AL West, where Seattle, powered by Hisashi Iwakuma, mowed down the Minnesota Twins in a 2-0 win; the Angels overcame an injury to Jered Weaver to beat the Toronto Blue Jays, 5-2; and Oakland beat crosstown rivals San Francisco, 5-0, behind a nine-strikeout effort from Jesse Chavez. “It’s exciting times in the division,” said Mariners starter Iwakuma through an interpreter. “Which brings us all great sadness, as we know we are distracting the world from the final hurrah of the great captain Derek Jeter. Tonight was the first game of his final series in Cleveland and all anyone is talking about is the AL West?” Iwakuma then bowed his head and added in English, “We are all very sorry to Derek.”

Orioles third baseman Manny Machado registered a career-high five hits before slumping slugger Chris Davis busted things open in the 11th inning, leading Baltimore to an 8-2 win over the Washington Nationals. “It’s been a tough year for me,” Davis admitted after the game. “I was feeling like the ghost of Brady Anderson was lurking around every corner in the clubhouse, dooming me to be a one-hit wonder, just like he was.” When asked if anything had changed for Davis, the Orioles first baseman admitted, “Well, yesterday I told this to [Orioles manager] Buck Showalter, who explained to me that Anderson took over the position of VP of player development within the Orioles organization during the offseason. So the reason I’ve seen Anderson around every corner is because he works here, and not because he’s a ghost.” Davis then narrowed his eyes and added, “Unless that’s exactly what Ghost Brady wants me to think.” He then turned to see Anderson waving at him menacingly from a distant corridor.