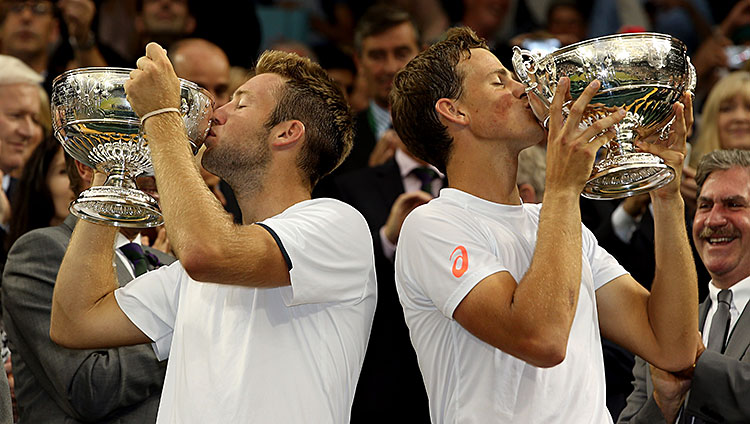 For good reasons, another Wimbledon final dominated the talk Monday. But on Saturday afternoon, something glorious happened. Jack Sock happened. A few notable threads to pull on here:

• Jack Sock is an American tennis player, age 21, and is now the third-youngest player to have ever won a Grand Slam men’s doubles title and a Grand Slam mixed doubles title. (He and fellow American Melanie Oudin won the U.S. Open’s mixed event in 2011.)

• He is a product of AMERICA’S BREADBASKET, a Lincoln, Nebraska, native who moved to Overland Park, Kansas, in fifth grade to work with famed youth tennis instructor Mike Wolf.

• He and his tennis partner, Canadian bash brother Vasek Pospisil, had never played together before Wimbledon.

• When Pospisil was asked how they ended up as partners, he said, “We exchanged some texts.”

• Sock ate Chipotle 18 nights in a row when he competed (and won) in the Boy’s Junior National Tennis Championship in 2010.

• The next year he attempted basically the same thing at the French Open Juniors, with less success.

• He rides for the soulful, heady jams of Citizen Cope.

• He’s a huge bro, if that last thing didn’t make that clear enough.

• Whatever bundle of titles he winds up winning over the course of his career can easily be described as “the Sock Slam,” no matter the combination.

Though doubles doesn’t quite have the narrative power of singles, Saturday’s final oozed with epic potential. Here we had Sock and Pospisil — POPSOCK, the press nicknamed them — going against the Bryan brothers, perhaps the most dominant doubles pair in the sport’s history, winners of 15 Grand Slam titles including three at Wimbledon. (Admittedly, the Bryans have hit a relative dry spell and hadn’t made the finals in the last three Grand Slam events after winning the four previous.)

Did POPSOCK quiver at the sight of the Bryans and their matching hats? Not exactly — POPSOCK basically re-created the beach volleyball scene from Top Gun on a tennis court. Saturday was filled with fist bumps, smiles, a lot of on-the-fly logistics at the service line, and a little good old-fashioned eye-closing (“Close your eyes; hope you play the best tennis of your life,” Pospisil offered as his strategy post-match). The Bryans, however, remained chippy — Bob and Mike even switched sides after the third set, before switching back — and fought POPSOCK into a fifth set.

Down 6-5 in the final set, the Bryans had the serve in that final effort to draw out the match. Though the Bryans saved five match points, Sock smoldered the final forehand return to put POPSOCK on the podium. “We had a lot of fun, people could see that,” Sock said.