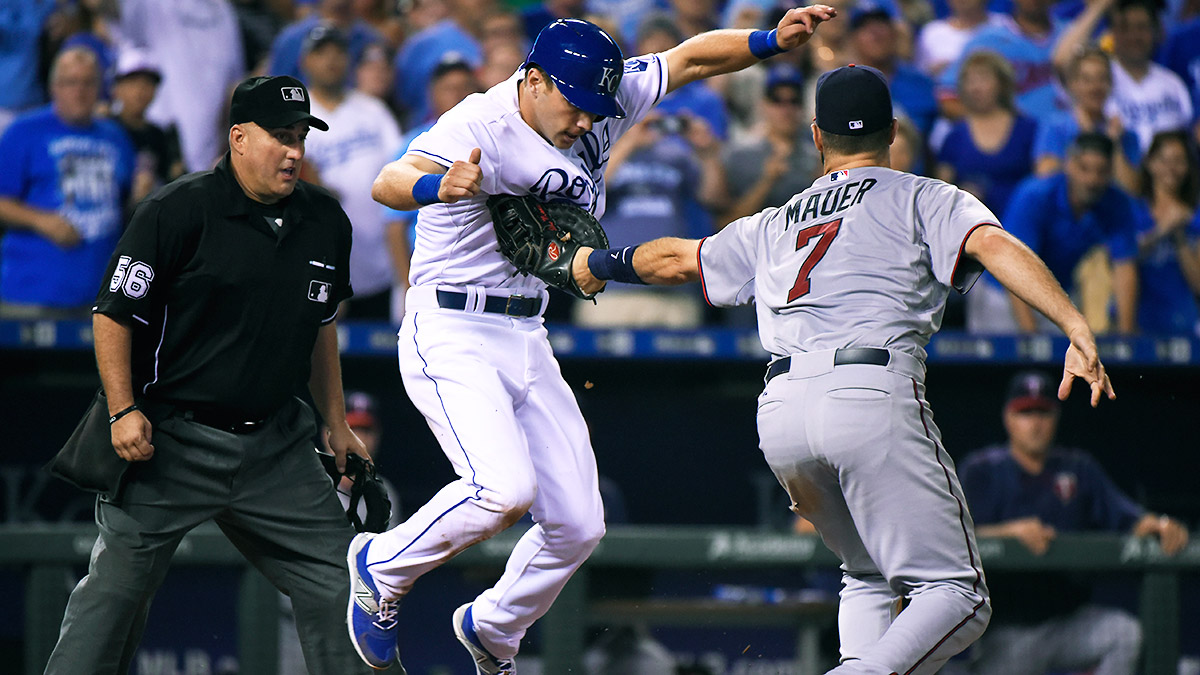 One of the best things about former Kansas City Royals reserve infielder Dusty Coleman is that his name is “Dusty Coleman.” With a name like that, he was either headed for Cooperstown or destined to be remembered for something … else. Now we know that Royals fans will remember him for something else.

Coleman made his major league debut on July 3, at age 28, after seven years at various minor league levels in the Oakland and K.C. systems. He played college ball at Wichita State, around 200 miles southwest of Kauffman Stadium, deep in the powder blue belt. And throughout his minor league career, he displayed defensive utility at second base, third base, and shortstop. But until the need for more at-bats sent backup infielder Christian Colon to Triple-A Omaha, Coleman had to wait for his chance.

What happened when he finally got that chance, as a pinch-runner in the ninth inning against the rival Twins, was enough to send Royals fans back to the vortex of hard, hard sucking that defined the early 2000s, where names like “Kit Pellow” and “Brandon Berger” conjure themselves from the shadowy corners of the mind. Moustakas lifted to the outfield a fly ball that appeared deep enough to score Coleman, who was at third base. It looked like a walk-off sac fly.

Halfway home, Coleman inexplicably slammed on the brakes. He was out by a mile, flopping down the line like a catfish out of water before being tagged out to send the game to extras. The Royals eventually won, preventing Coleman’s name from potentially becoming a regional curse along the lines of “Lin Elliott,” but he was already being remembered for the wrong reasons.

About three weeks later, having failed to collect a hit in the four plate appearances he’d managed in the majors between a brief return trip to the minors, Coleman stepped to the plate in the top of the ninth during a make-up game against the Cardinals. The situation was promising: The Royals were down one, but had runners at second and third,1 and no outs. Manager Ned Yost had already switched Kendrys Morales in and out of the game, leaving Coleman as the last bat standing, poised to finally make his mark.

Instead, he struck out on four pitches, and the Royals went on to lose, 4-3.

On Friday, the Royals sent Coleman back to Omaha in favor of Cheslor Cuthbert, a younger, greener player who fills the same role as Coleman. With Colon likely to return to the majors at some point, it seems unlikely that the Royals will recall Coleman again this season, barring a huge division lead that lets them get cute when rosters expand in September.

For a team that is on its way to a huge division lead, Coleman’s story might seem like an irrelevant blip on the road to October. But in a sport obsessed with narratives, triumphs, and tragedies, it’s worth taking a moment to remember Coleman. He’d be the Moonlight Graham of the modern era — if Moonlight Graham had actually gotten a major league plate appearance and screwed it up enough to be remembered by it.

Coleman waited seven years for his shot, and he got it. That he might not get another is deeply sad — especially since he doesn’t have that sweet medical career to fall back on. So while you’re toasting Johnny Cueto’s arrival in Kansas City, take a minute to pour one out for Dusty Coleman.

The Introduction to the End in New Orleans