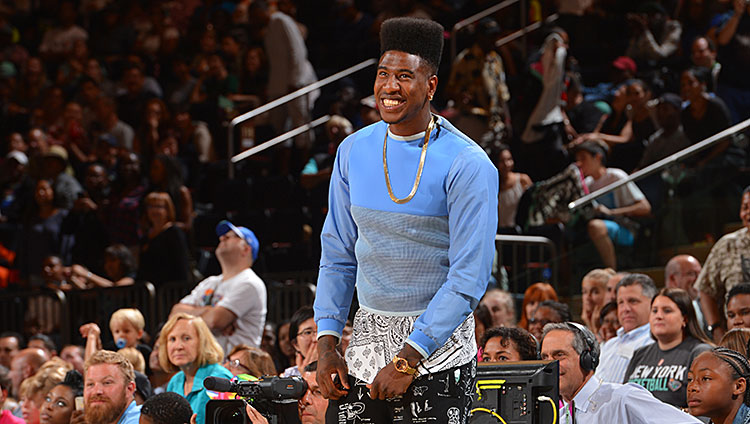 Upon observing Iman Shumpert’s freestyle over Migos’s “Versace” and the bright spots on the somewhat-conceptually-overcooked mixtape Th3 #Post90s, one thing becomes obvious — the 24-year-old Knicks forward can get loose. This September, Shumpert will be prominently featured on the long-rumored, finally forthcoming Full Court Press Vol. 1, an album that features a handful of NBA veterans (Shawn Marion, Lou Williams, ahem, Juwan Howard) showcasing their skills on the mic with the aid of a few featured rappers (Future, Ma$e, Bun B).

Grantland spoke with Shumpert — who is probably the most natural MC of the NBA group — about how he got started, his track with Baron Davis and Ma$e, what the Knicks’ locker room sounds like, and which NBA player he would love to hear on a mixtape.

Full Court Press has been rumored to be in the works for a long time.

They expressed an idea to me; I wasn’t all the way sold on it. They sent us the track, Baron Davis was involved, and was already hyped about it because me and Baron already wanted to do music together. It just sort of organically happened. They got Ma$e, and a year later I threw my second verse on it and we had a song.

Your song is called “Welcome to NY.” I’m guessing it has a sort of New York vibe to it. What does it sound like?

It’s like a “get ready for the moment,” it’s got that feel of “get ready because something’s about to go down.” When I was writing it, I wrote as if the audience listening to the song is an opponent, coming into New York, into the Garden, and what it’s going to be like. Ma$e just took that O.G. feel to it, how he feels about where his life is right now, just comparing it to playing basketball. I think he made it dope.

Did you know Ma$e and Cam’ron were on the same high school team?

That makes it even more dope! I didn’t even know Ma$e could hoop.

Listening to the music you’ve made, it’s clear that you have a lot of experience rapping. It has its own style, so it’s not just like, someone imitating someone else. Where did you start?

Some guys are rapping, some guys are shooting dice, some guys are playing basketball — I was around it all the time. Of course you wanna rap, whether you hoop or not, you want to tell your side of the story. The more and more I rapped, the more people started to like it. Some people would be like, “He can’t hoop. I heard him the other day, he can rap! I don’t think he hoops.” Then people figured out I was an All-State basketball player and they connected the dots. I just kept running with it and it gets better every year.

My last mixtape, I was so into making it 21 songs that it was probably a little too long. Twenty-one songs ’cause I wore 21. But the next one is going to be more of a story line.

What are you thinking?

I got an EP that I’m working on that I’m almost finished with. It’s called Kids on Thrones. I’ve been working on that this summer. I’m going to shoot a couple of visuals. I don’t know any release dates. I’m a perfectionist; I want things to sound good and sound better, I want to make improvements. Now that I have a collection of work, it’s time to start editing it, cut some stuff out that I wanted to keep. Little by little, making it better.

Who on the Knicks is also really into music? Have you talked to Phil Jackson about music yet?

None of them hop in and rap. I’ve been doing it for so long that they don’t want to rap with me. I push J.R. and Melo and Amar’e to do it, but they never do. Once in a while, they’ll do two lines and then laugh at me because I thought they were gonna actually join in the rap. They leave it to me. We have a bunch of guys that know music that are always trying to take over the iPod speakers.

Who always tries to hijack the speakers?

Probably Melo. If he took over the iPod, we’re going to listen to a lot of Young Jeezy, a lot of Nas, a lot of Method Man. But you don’t know. Melo might go old school and just play a bunch of old-school songs and have an ’80s party in there. Melo might put on Frank Sinatra.

I’m all for switching up the mood. You can’t listen to the same stuff all the time, you got to keep it funky. You can always count on Melo throwing you a curveball.

Right now my guys are probably Kendrick Lamar, Pusha T, Travis Scott, Kanye West, J. Cole, Wale. The best thing about Kanye is that Kanye evolves every album. I can always count on Kanye to think of something new, give me something to think about. I like people that take that chance with their music and try to make you think outside the box. Kendrick Lamar is good at making you think outside the box. J. Cole is good with it. I think Wale is one of the dopest in the industry with coming with a new mind-set each time out. I think he’s a very thought-out guy.

You’re only 24, but your sensibility definitely strikes me as informed by the ’80s and ’90s rap.

I was one of those kids that was nosing in his brother’s business. I was mixing through my older brother’s CDs and found something I wasn’t supposed to find and listened to it, learned the words. I didn’t really understand what it meant but I liked the rhythm. I’ve enjoyed rhythms my entire life. I would listen to stuff in my Walkman when I was playing basketball, while I’m working out, while I’m shooting in the backyard and nobody was shooting with me.

After a while, I began to put my own little playlists together and my own little raps. At first it was corny, but the older I got, the more people could relate to what I was saying. I definitely started listening to all those classic songs just by being nosy and wanting to hang out with my big brother and his friends.

Chicago seems to be one of the epicenters — if not the epicenter — of the modern rap landscape. Do you like the sounds that are coming out of your hometown?

I like where Chicago is going. I like drill music. They really made their own lane and they’re pushing to keep it alive. I feel like they created a way to match that Chicago fire that comes from the city with the type of music.

But also, there’s space for someone like Chance the Rapper, who does something completely different.

Chance is just one of those weird dudes. He’s dope. I like Lil Durk. I talk to Lil Durk and Lil Reese, and all of them. I’m trying to lay low and stay out of trouble and they’re telling stories about what’s really going on in Chicago.

Say, hypothetically, everyone in the NBA was capable of making an album. Whose album would you want to hear?

Cole Aldrich. I want Cole Aldrich to make an album. I would pay money to hear what he’s got to say. I think if Cole … because I know the type of thought process that Cole has on the NBA game, and how he goes through life. He likes to live life simple and he likes to shut things up, to work. I think that if he worked on music, he has a good and calm mind that he could really put some music together that he wants to hear.

Everybody knows what they want to hear. As long as you’re in tune with what you want to hear, I think you can make a good song. You just have to put the time into it and be truthful with yourself if you make some garbage. I think Cole would take the time to make the music that he would like to hear. I would love to laugh and hear what Cole has to say.

After 'Barton Fink 2': A Proposed Nine-Year Franchise Plan for the Coenverse