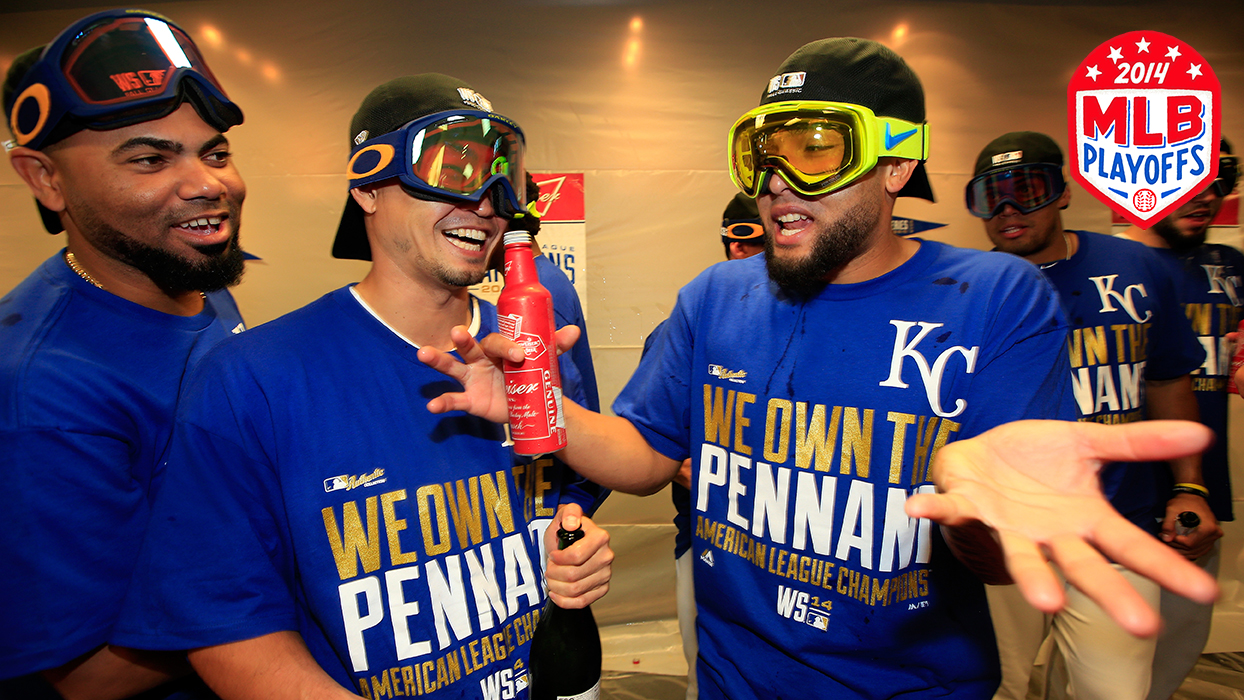 Forget a montage. This Kansas City Royals playoff run is a movie:

• Catcher Salvador Perez’s walk-off base hit in the bottom of the 12th inning in a wild-card game in which the Royals had a 4.4 percent win probability going into the eighth inning

• Third baseman Mike Moustakas’s insane power bender in the postseason — especially in the extra innings of spirit-breaking games in both Anaheim and Baltimore.

• Alex Gordon’s ritual hatred of pleasure, manifested in outfield defense alongside a center fielder who is basically Spider-Man, and a right fielder who made the two most “LOL, OK” catches of the postseason.

• The “THAT’S WHAT SPEED DO”-preaching base-stealing specialists who came in to induce pitcher paranoia and swipe bags with reckless joy.

• Cyborg after cyborg out of the bullpen.

• A manager that Brewers fans will forever hate who bunts as if Satan demanded sacrifice.

• A GM who seemed to violate every Cardinal baseball sin — trading the two best homegrown players in a generation for a handful of athletic but unproven pieces.

Yost bests Showalter. Mike Moustakas outpowers Mike Trout. Billy Butler, who is a tub of goo, stole a base. Dayton Moore is looking at a raise, not an ax. The two best top-to-bottom teams in the American League (and possibly baseball) lost to a team that’s built on such a fragile axis that any slight shift could trigger an explosion. (Naturally, that very same unstable element is now considered a blueprint for success.) Never has down been so up, and let’s just say that me and the Kansas City Police are into it.

But what else did speed do? It broke the Internet. Riding a tide of goodwill from the Sweet Ballad of Lee Sung-woo — a saga involving a die-hard Korean fan that the Royals treated to a long stretch of home games and VIP treatment — they kept splashing those vibes around, whether it was Eric Hosmer picking up a $12,000 tab at a local bar, or the organization throwing their love behind a local 28-year-old’s fight with cancer. A woman’s boyfriend somewhat condescendingly promised her a puppy if she watched the Royals with him — she held up a memorable sign during the wild-card game — and like so many of the Royals runs this postseason, that damn puppy (a Corgi!) manifested itself at the perfect time.

Jeremy Guthrie incited strange outrage for wearing a Chris Brown–paraphrasing T-shirt — though Guthrie later apologized, you wonder if he was better off doubling down on that attitude, like his teammate Jarrod Dyson, who claimed early in the series that the Orioles wouldn’t need to worry about returning to Camden for Game 6 and only reiterated his stance. (Allegedly, when his teammates saw his comments scroll across the bottom of the screen on a highlight show, they cheered.)

It even turns out that Sung-woo will be coming back for Game 1, 30 for 30 documentary crew in tow. The Royals seem to get that their fans want to live vicariously through them, and they indulge them. Both games were clinched at home, and after the Baltimore series, Perez and Hosmer hung around and paraded around the stands for hours, taking selfies and waving brooms.

If you want a good snapshot of how jacked this Royals run has made Kansas Citians, take a look at this story from the Kansas City Star. It’s a writeup of a Heat-Warriors preseason game, held at K.C.’s Sprint Center. It takes seven paragraphs to get to anything about the game, since the focus of the night was the presence of Royals players and what they were up to. (Jarrod Dyson was DUNKING, ICYMI.) If all of that isn’t enough to monopolize a Facebook newsfeed, the Vines — also the memes! But mostly the Vines:

Two rounds, two opponents that seemed to yield to fate itself — “It’s hard to take advantage of mistakes when they’re not making any,” bewildered Orioles first baseman Steve Pearce said after Game 3, about a week after Greg Holland liquefied Mike Trout’s legs for the ALDS-clinching strikeout — and the crowds are only getting louder and larger. As someone who usually goes out of his way to avoid superstitious behavior, thoughts like Hey, should I wear that shirt I wore to the ALDS? or Should I sit in the same seat and invite the same people over? creep into my head. In terms of work — let’s just say I’ve gone to the well a couple times — I haven’t actually written anything about the Royals during this entire undefeated streak.

I think to myself, Is my silence a key to their success?

If one more person mentions Rocktober, I’m going to flip the fuck out.