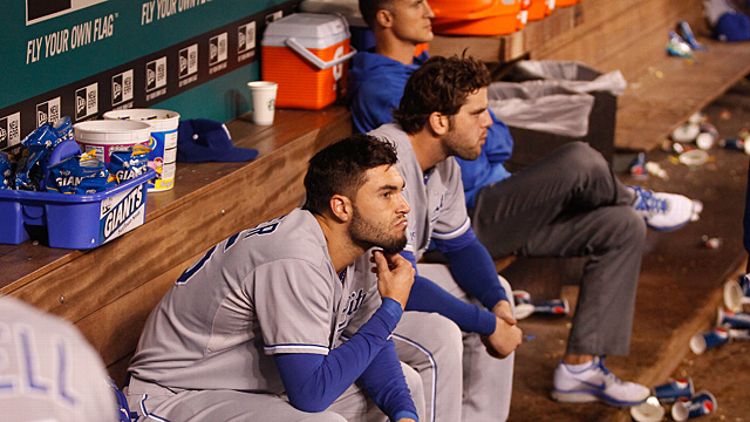 “We can put the Sox on whatever TV you want,” he said as I sat down at the bar, between two televisions. I ordered and explained that I was actually a Royals fan, but that he shouldn’t sweat it, because they were in Seattle and wouldn’t be on until 10.

“Oh yeah, the Royals,” he said, as if was recalling a memory that hadn’t crossed his mind in 20 (28, to be exact!) years. “They had a good year this year.” Then he Bostonsplained me, consoling me in the way a cocky blue blood politely consoles a more downtrodden soul whose team was never legitimately recognized as a competitive threat to his or her own team. A coworker and Yankees fan had recently offered, “I really liked you guys this year. Fun to watch!” Now this bartender was assuring me, “If only they had had more offense, bats in the corners. What makes the Red Sox so great is …” He went on, I think. I had been drinking.

There’s been a great deal of hemming and hawing about this Royals season. Every strain of relative optimism is quickly countered by a blogger tweaking out about Wil Myers, a name whose very sound brings to mind a turquoise tidal wave crashing against a scraggly shanty. As much as I’m encouraged by the scholarship I read to be all “rabble rabble WIL MYERS rabble” and decry the shortsighted move by Royals GM Dayton Moore to flip Myers and prospects for James Shields, Wade Davis, and Elliot Johnson — essentially robbing the Royals of an exciting young franchise cornerstone — I’m ultimately OK with it. No, seriously, I’m good, thanks for asking. Because this season was fun as hell. For the first time in my life — I was born in 1986, though I’ll claim I was alive for the ’85 series, because it’s true in a cellular sense — I actually enjoyed being a Royals fan.

Shields brought a level of seriousness to the team that just wasn’t there in the previous, kneel-the-clock-out-and-nab-that-comp-pick stretch runs of the recent past. It was as if the other Royals pitchers collectively were like, “Uh, this guy is intense as hell. He’s literally howling out there! And that beard? Look at that thing, it looks super-bristly. It looks sharp, like we shouldn’t touch it, at least not with our pitching hand. We should pitch well.”

Accordingly, Ervin Santana (who is probably going to walk after the season) and soft-tossing veteran Bruce Chen had career seasons. Greg Holland, who they probably should have traded at the deadline because the bullpen is just that deep and there’s just no way he can pitch better than he did this year, was a reliable deliverer of three sharp “Holland strikes out [batter], 1 out” GameCast updates.

After a slow start, they went white-hot to the point where a wild-card spot was not even that crazy of a thought. We Royals fans actually had to learn about wild-card scenarios, as it’s not exactly a situation we’ve been in before — a recent Rays-Rangers series was particularly thorny, because we needed either team to sweep, but somehow those teams splitting hurt the Royals. I took screenshots of the wild-card standings daily and peppered them into most correspondence. The Royals mailed out invoices for playoff seats to season ticketholders, which is a normal thing that teams do, but this time you might actually check your bank account before you sent the form back with a checked “Yes.”

Then they fell back to earth. The Indians, who had an easy slate in September — I mean, how it is possible that Jason Giambi is ruining my life in 2013? — look like they will be getting the last wild card. With last night’s loss to Seattle, the Royals are mathematically eliminated. The window to make the Shields trade look like a “win” is now that much smaller, as Moore has acknowledged when he’s not busy bending his stated position back over itself. Meanwhile, Myers bats cleanup for a playoff team and hit a home run the other day that looked like the cartoonish blast Ken Griffey Jr. smashed in Little Big League and sounded like a redwood snapping like a toothpick. While I might not be thinking about Shields a year from now, Myers seems to be a lock to headline my nightmares well into the future.

A while ago, I decided I was tweeting about sports too much, inventing some kind of self-imposed notion that I was required to tweet about music more and sports less. I created a “Note” on my iPhone where I would put these “sports tweets” that were never to be made public. Example: “Abolish the DH. It has no place in baseball unless Billy Butler starts hitting.” “Selective endpoints!” one read. I don’t know what that means but I know, intuitively, that it’s related to the Royals. The point being, powder-blue thoughts clouded my mind all year, and let’s just say I ain’t exactly seeding the clouds. The thirst is real, and what I want isn’t on the tap list at Professor Thom’s.