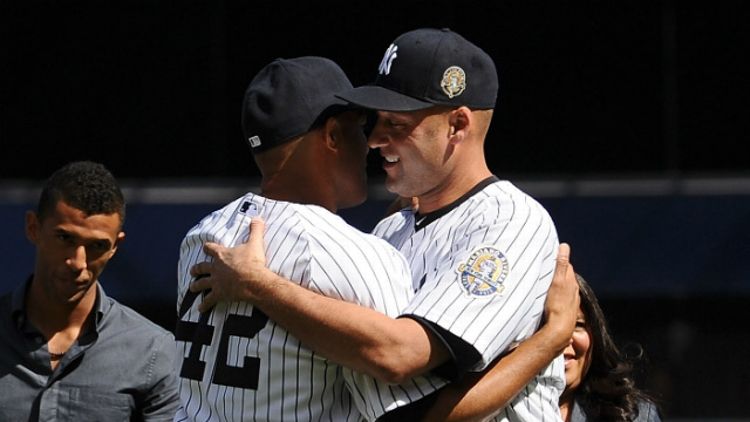 Sometimes you find yourself watching a game in slow motion.

It’s not the same thing as the game slowing down for you when you’re in the zone, when the ball’s coming at you like it was hit through a swimming pool, and you feel like you’ve got all the time in the world to chase it into the hole, twist your body as you hang in the air forever, and deliver a perfect jump-throw to first to get the runner by a step.

Or when you’re locked in at the plate, and here comes that slow-ball again, headed for the outside corner, so you reach across and hit it over the short porch in right.

I’m talking about a different kind of slow motion.

The kind when you’re sitting on the bench and watching a disaster about to happen right in front of you, and you’re powerless to stop it. The kind when you’re down 3-1 at the beginning of the seventh, and you just need to keep it close to give the offense a chance to get the lead back for you. And you’re sitting next to Girardi, because you’re on the DL, but as Captain, you’re like a second bench coach in the dugout. You’re right there for your manager, who might want some advice in a tight spot.

But then you hear Girardi say: “Get Joba.”

And you say: “Skip, maybe not Joba this time.”

And you say: “Maybe not Joba here.”

And then you see Joba jogging in from the bullpen. Maybe not jogging, exactly. Jogging’s not really a thing Joba does.

And you see Joba warming up.

And you see Joba walking the leadoff guy, who’s hitting .200.

“You can always pull him after one batter, Skip. Expanded rosters.”

And you see Joba giving up a single.

“Plenty of guys left in the bullpen, Skip.”

And then you watch as Girardi clenches his jaw.

And then you watch a three-run homer disappear into the stands. The flight of the ball takes 12 hours.

And then it all speeds up. You’re back in your hotel room watching the Dodgers taking a swim in the Diamondbacks’ pool.

Nobody on our team swims until the World Series.

But all you can picture is Joba sitting in the middle of the desert.

And there are no pools for hundreds of miles in any direction.

Maybe not Joba there, Skip.

So Pettitte announced he’s retiring after the season. He’s retired before, but you get the feeling it’s going to stick this time.

So next season the Core Four is going to be down to the Core One.

You hate to think about how strange that will be, but the only thing you can do is start building a new core. A new championship core. One Captain. A Robbie Cano on a fresh contract. A CC Sabathia, after he figures out some stuff in the offseason. We’ll find a fourth. We really had five last time, if you count Bernie Williams. People tend to forget that because he stepped away a little quicker than the rest of us. Recruiting a fourth shouldn’t be so hard.

A-Rod’s got some serious time left on his deal, but maybe it’s not going to be him. He hit a grand slam tonight. Broke Lou Gehrig’s all-time grand slam record. I go up to the top step of the dugout to high-five him. He holds my hand and pulls me in close.

Then whispers in my ear.

A Core Three should be fine.

6-0, our way. Ivan Nova shutout. That kid came through when we really needed it. You almost don’t remember how last year he’d sometimes wander off into the outfield in the middle of a start, sit down in front of Grandy, and start filling his hat with grass. He’s come a long way. It’s nice to see a player develop like that.

We’re still alive. We’re more than still alive. Two in a row. Momentum is clearly on our side. You hate to get overconfident about the way things are going, but sometimes overconfidence is even better than confidence. It’s like confidence, plus you add a little more because you believe in yourself. You need that in the stretch run if you’re going to make up the ground you lost in Boston.

We’ll get back out there tomorrow and make it three in a row.

Mo’s retirement ceremony was perfect. It almost makes you forget about what they did to him in Boston.

Mayor Bloomberg came out and declared it Mariano Rivera Day. The Yankees gathered all the key guys from the World Series teams — Bernie, O’Neill, Jorgie, Matsui, Tino, Mr. Torre, John Wetteland, and Jeff Nelson — to pay their respects. It’s crazy to think that Mo once set up for Wetteland. But it happened and we won a Series like that. Wetteland owns a small paint store now. Off-brand stuff, mostly, but I hear it does pretty well.

Metallica came out to play “Enter Sandman” live. They gave Mo a guitar and a speaker cabinet. Pretty special. Mo gave them all hugs even though he’s not really a fan of their music. He was always more of an Anthrax guy; they had the more uplifting messages.

The Steinbrenners gave Mo a Waterford crystal replica of his mitt. Then they brought out a bound and gagged Red Sox fan from the Boston tribute night and offered to shoot him, then and there, in front of 50,000 of Mo’s biggest fans. But he declined and asked that the man be set free. You can’t help but wonder how you would respond in a situation like that, and you hope you’d show the same kind of compassion. Mo’s a pretty special human being. In his speech he even asked the crowd not to hurt the guy because we are all God’s children, even most people born in Massachusetts. You hope that guy made it out of the stadium alive. There’s a limit to what they’re going to listen to, even when it’s Mariano Rivera asking them.

It was also Andy’s last regular-season home start. More than anything you wanted Mo to save it for him, like he had so many times before.

But it didn’t work out that way.

He’ll just have to save a final one for Pettitte in the playoffs. Game 7 of the Series.

It’s the only fitting way for the both of them to go out.

I’m lying in bed, watching Baseball Tonight, trying to keep track of the wild-card race. We’re deep enough into September where it isn’t shameful to pay attention to such things any more, even if the wild card is fundamentally beneath you. You still need to know what’s going on with the other teams.

They’re in the middle of the Orioles/Rays highlights when I hear something. A hiss?

It takes me a second to track it. But it’s coming from behind the Japanese screen Minka made me buy years ago at a Z Gallerie.

I look over and see the top of a head peeking over the screen. Then eyes. Familiar eyes.

“What are you doing here, Alex?”

“I came to show you something.”

“Through the screen, Jetes.”

“It has to be through the screen.”

“OK. Through the screen.”

“I’m not dimming the lights.”

I dim the lights. He turns on a flashlight behind the screen.

And I see there’s something behind it. Something more substantial than legs.

“The silhouette tells the secret.”

“What will be done?”

I go to flip on the lights. When I turn back, he’s gone.

I check behind the screen. Nothing.

Then I notice some U-shaped divots in the carpet.

And there are four of them.

Baseball Tonight tells me the Rays rallied in the bottom of the ninth.

There’s a game to win tomorrow. An important one.

Before the game I hear talk on the TV that we might “play spoiler” for the Rays. They’re one game up on Texas in the wild-card race.

There’s still time to turn this around.

Pettitte’s retirement ceremony was a little more restrained than Mo’s. He only announced earlier in the week, so there wasn’t as much opportunity to plan something big. There was also the fact that he retired before, and that he played three seasons in Houston. The Steinbrenners don’t forget that kind of thing. They wanted to just go with a “Thanks Andy Pettitte” on the Jumbotron during the seventh-inning stretch, but I fought for an on-field tribute. I had to remind them that Andy is still a True Yankee. He had a full re-pinstriping in 2007. Three misguided years in Texas don’t erase them. Four might have, but that’s not a universe we live in. In ours he returned and won another Series. You can’t withhold a proper sendoff based on theoretical happenings in a parallel reality. That’s not how it works. Who knows how many championships we won in that one? We could be in the mid-40s. In this one we got 27 and 15 great years of a Hall of Fame pitcher. You’ll take that every time. You don’t even need to see what’s on the other side of the wormhole.

After the ceremony, it was up to Phil Hughes to keep Pettitte’s career going. I handed him the baseball and told him to go get this one for Andy. For his hero. For his mentor. For a whole team trying to keep its mission alive.

And the team didn’t get out of the eighth. The news came down as we watched the F appear next to Cleveland’s name on the out-of-town scoreboard.

We ran out of time.

It’s not a word you like to use. But that’s what happened. Any season that doesn’t result in a world championship is a total failure. That’s the Yankee way, the way Mr. Steinbrenner taught us. That’s what’s painted on the walls of the tunnel from the clubhouse to the dugout. That’s how Lou Gehrig ended his “Luckiest Man on the Face of the Earth” speech.

There are four meaningless games left.

I already miss Andy and Mo.