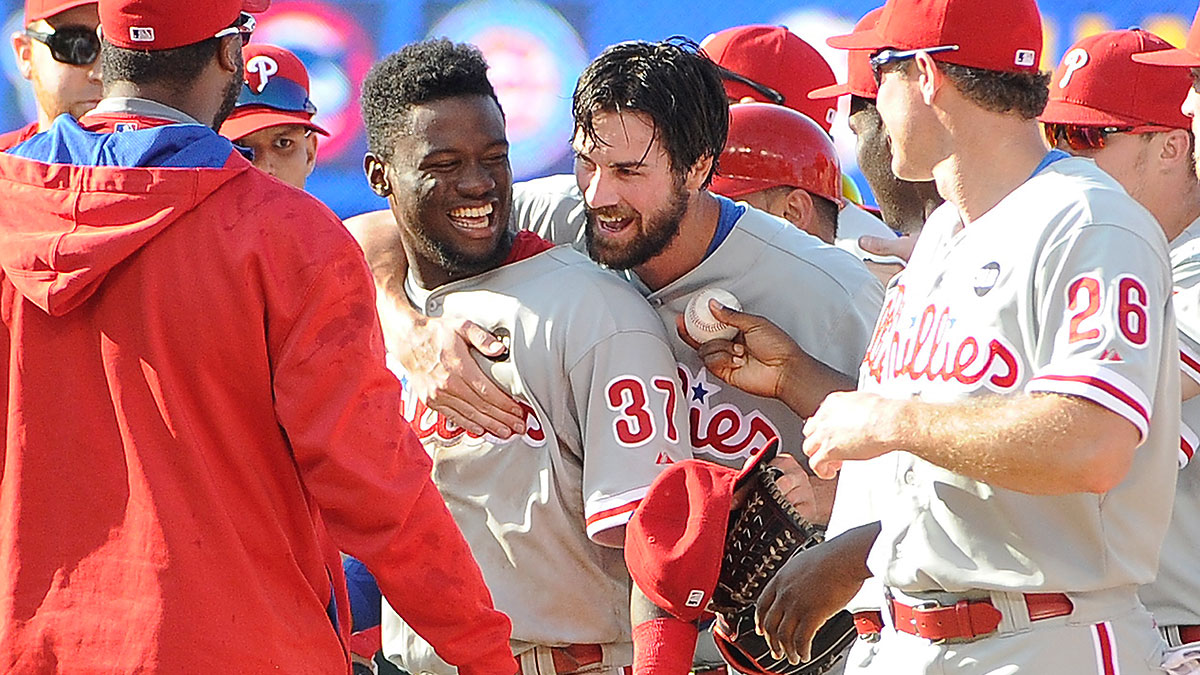 The wind was blowing in at Wrigley Field on Saturday — 14 mph from right field, the box score says. It was also blowing in from left at an unspecified but considerable speed, judging by the way a first-inning drive off the bat of Kris Bryant got the home crowd hoping, hungry for more Cubs rookie heroics, before the ball fell into the glove of Phillies left fielder Cody Asche.

So we could call Cole Hamels’s first career no-hitter — a 13-strikeout, 5-0 victory that snapped the Cubs’ 50-year streak of not being no-hit — wind-aided. We could also call it umpire-aided, based on a couple of generous Phil Cuzzi calls, including a seventh-inning strike on Jorge Soler that preceded Soler’s purgative bat snap …

… and an eighth-inning low strike on a curveball that evened the count on David Ross.

Previously taken pitches of the same type, in the same locations and counts, have been called strikes only 14.4 percent and 19.1 of the time, respectively.1

… and two shallow flies that might have been duck snorts on a different day.

That’s almost always the way it works with no-hitters, most of which are made possible by forgotten fingers on the scale, proverbial don’t-show-up-in-the-box-score contributions (and stiff, in-blowing breezes) that make history happen. More than anything else, though, this no-hitter was Hamels-aided. Facing a below-average offense (albeit in a hitter’s park), the 31-year-old lefty — who provided some direct defensive aid by making a pair of quality plays on grounders back through the box — missed bats more often than he has in any start since his rookie season, racking up 27 swinging strikes, 12 of them coming on his signature pitch, the changeup, which garnered 15 swings. He commanded his secondary stuff, freezing batters for called strikes with off-speed stuff 13 times, and he threw 26 curves — a sensible decision, given that the pitch is both breaking more and inducing more whiffs than it has at any point in the past. He also threw heat, averaging 94.7 mph with his four-seamer (his third-highest average in a single start during the PITCHf/x era) and maxing out at 96.1, his fastest reading since mid-May. All told, he threw 129 pitches, tied with Marco Estrada for the most any pitcher has totaled in a start this season. Only two headline-worthy walks spoiled the potential perfecto.

Hamels’s first inning, which began with a walk to Dexter Fowler, was a false flag operation that briefly made the lefty look like every other Phillies starter. As Corinne Landrey observed last Friday, the Phillies have used 10 different starters in the month of July alone, more than most teams have used all season. According to the Elias Sports Bureau, that’s tied for the second-most starters used by one team in a calendar month during the wild-card era.

Rotation turnover is rarely a positive sign, and the Phillies haven’t found strength in their numbers. Their 10 July starters — plus Dustin McGowan and Phillippe Aumont, each of whom made a single start earlier in the year — have collectively produced what would be the worst ERA-2 of any rotation of the expansion era (1961–2015), even with Hamels’s nine no-hit innings factored into their totals. If Hamels doesn’t finish the season with the Phillies, they might have the worst-rotation record locked up, although the recent arrival of 2014 first-rounder Aaron Nola would at least ensure that the highlight isn’t Aaron Harang or Jerome Williams, a starter so unmemorable that his former teammates went two years without knowing his name.

It’s not just that the starters are terrible, although other than Hamels, they’re almost all unproven or proven to be bad. It’s also that the defenders behind them are just as overmatched, ranking last in the league in Defensive Efficiency and Defensive Runs Saved. If at the beginning of the day we had handicapped the odds of each of the game’s starting pitchers doing what Hamels did, Cubs starter Jake Arrieta would have been by far the betting favorite.

Arrieta is already regarded as unhittable in a way that Hamels hasn’t been, even though the lefty is the much more accomplished pitcher. Hamels is heading for Mussina territory, building a strong résumé as one of baseball’s best starters over an impressively long period without standing out from the other aces in any individual year. He has four top-10 Cy Young finishes, but none higher than fifth. This stat sums him up: Hamels is on track to become the sixth pitcher (and the first since the ’60s) to post a FIP3 between 3.00 and 4.00 for 10 consecutive seasons of at least 100 innings pitched. You don’t do that without playing at a high level — four of the previous five pitchers to do it are in the Hall of Fame — but you also don’t do it if you’re interspersing oh-shit seasons among the merely excellent ones.

Saturday’s start, at least, was an oh-shit outing. With the Phillies effectively out of contention on Opening Day, everything Hamels has done this season has been framed in relation to the trade deadline. In two starts preceding his no-hitter, Hamels allowed a combined 15 runs in 6.1 innings, which led to some speculation that his trade value would suffer. Naturally, the no-hitter led to equal and opposite speculation that the Phillies would be swamped with suitors. MLB general managers probably don’t do business like day traders, making decisions about pitchers who’ve made almost 300 career starts based largely on their last two to three outings. No one would trade for Hamels thinking he’s getting a guy who gives up no hits.

On the other hand, Hamels is signed through 2018 (with a team option for 2019) at a reasonable-but-still-considerable rate of $23.5 million per year, so any loss of stuff would be especially concerning. Hamels had less than his usual velocity in his previous start, so the restoration of his stuff on Saturday may have eased some concerns, assuming his pitch count didn’t create any. It isn’t the no-hitter that’s making Ruben Amaro’s rotary phone ring, but the glimpse of a guy who looked like he’d be worth a top prospect or two. With the eyes of every scout and special assistant upon him — or at least the ones who weren’t watching Johnny Cueto — Hamels may have thrown hard enough to become a former Phillie.

As Philadelphia Daily News columnist David Murphy told Jonah Keri last week, the Phillies’ organizational hierarchy is unclear, which, along with Amaro’s notoriously lofty demands, clouds Hamels’s immediate future. If the no-hitter was his last hurrah for the Phillies, though, it would be a cinch to set the highlights to “Time of Your Life.” The Phillies and the Cubs are approaching competitive aphelion, the point at which their future prospects are farthest apart. The Cubs have crawled out of their cocoon with a potential playoff team, too much young talent to fit on the field, and a road map to a title, while the Phillies are stuck hoping they’ve hit bottom. Hamels isn’t the only remnant of the last great Phillies team — Ryan Howard, Chase Utley, and Hamels’s longtime catcher, Carlos Ruiz (who’s now caught four no-hitters) all qualify — but he’s the only holdover who’s still his old self, which makes the potential parting especially poignant.

The Phillies seem almost hopelessly far from becoming what the Cubs are today. Then again, they’re only a few years removed from having the expansion era’s best non-Braves rotation, a reminder of how quickly teams’ fortunes can turn. Hamels’s no-hitter would make a fitting farewell, but the best gift he could give Phillies fans is enough of another team’s talent to fan a smoldering organization’s embers into a flame.

A Culmination in Cooperstown: Pedro Martinez Enters the Hall of Fame