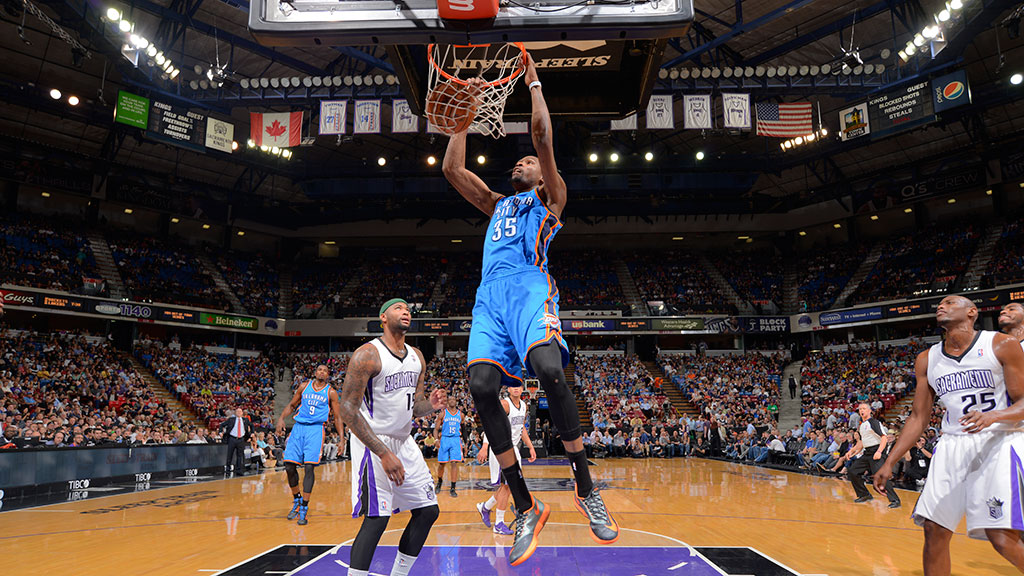 In case you were busy planning your resignation a mere 10 years after drafting Darko Milicic over Carmelo Anthony, Chris Bosh, and Dwyane Wade, here are the top five stories you missed in sports on Tuesday:

In improbable stories from the NBA:

Kevin “Muffins” Durant’s streak of 41 consecutive 25-point games was snapped, but his Thunder still took down the Sacramento Kings 107-92. “Do I feel Plumbled?” Durant asked after the game. “What? You mean like I got humbled by a Plumlee or something? No. Man? Come on. Definitely not.” Durant then raised an eyebrow and added, “But if I did, that would be the worst feeling I’d ever had.”

LeBron James was denied by Mason Plumlee on a potential game-winning dunk as the Brooklyn Nets beat the Miami Heat 88-87. “Do I feel Plumbled?” James asked after the game. “Humbled by a Plumlee? I guess I do. Man, this is the worst feeling I’ve ever had.”

In walking the fine line between tragic hero and notorious villain:

Despite nursing a thumb injury, Ryan Braun made a diving catch and hit three home runs for the Milwaukee Brewers, who beat the Philadelphia Phillies 10-4. “Oh, I’ve definitely been Plumbled over the past year,” a contrite Braun said after the game. “Which is to say I’ve been yelled at by a number of plumbers who were both cruel and had good points about how my behavior had let them down.”

In results that mean we might not see Zlatan again until the fall:

Chelsea fought back from a 3-1 deficit to advance on away goals to the semifinals of the Champions League after getting a 3-3 aggregate result against Paris Saint-Germain. Now you may be asking yourself, “Why does a team’s quantity of away goals function as a tiebreaker? Isn’t that a little trivial given the importance of the competition? Goals are just goals, right?” And the official answer from UEFA and FIFA is, “Hey, nosy neighbor. We’ve done it this way since the ’60s. Stop asking questions. You wouldn’t want to find yourself building stadiums in Qatar, would you, buddy? Yeah, that’s what I thought. Just move along and let us wrap these matches up, OK? Good.”

In a perfect season in Connecticut:

Breanna Stewart and the Connecticut women completed their perfect season and joined their male counterparts as NCAA champions with a 79-58 win over previously undefeated Notre Dame. Meanwhile, in a small apartment in Queens, there was a knock on the door. A man and his son were sleeping; the man on a couch, the boy in a bed. The man awoke, and opened the door. The boy’s mother stood on the other side of the threshold. “Martha,” the man said quietly, so as not to wake the boy. The woman said the man’s name and burst into tears. She told him of how her husband, Connecticut alumnus and die-hard Huskies fan Blair Whitson, had neglected her, of how she had $55,000 in her suitcase. Of how she had decided to leave the life that had hollowed her out behind her. Of how she had ever loved one man. The man nodded but said nothing. The word “neglect” rattled around in his skull. She took her index finger and put it on his chin, forcing his eyes to meet hers. “Just come with me for a drive,” she said. “Just a drive. Let’s talk, like we once did. Please.” The man looked at his former boss, his former lover, and nodded. He grabbed a coat and moved quietly out of the apartment. He did not wake the boy.

“So, how ’bout those UConn women?” the man asked from the passenger seat of the Whitsons’ Audi to fill the silence that was currently punctuated only by the sound of falling rain and the chiming of a seat-belt alarm. He had felt so much discomfort this year because of the performance of the Knicks, but nothing like this. “Your husband went there, yes?” Martha was driving quickly, merging from expressway to expressway in the outer boroughs of New York City, going nowhere in particular. “I didn’t watch,” she said as she wiped tears off her cheeks. “And I’m sorry. I’m so sorry. I’m sorry I carried your son to term. I’m sorry I let Blair throw him out. I could have raised him. I could have helped. Can I still help?” The man shook his head. “You don’t think about me still?” she asked. The man nodded. “Well?” she asked. The man had carved a life out for himself and his boy without her. He couldn’t let her back in. Not after all the broken promises. The man wanted to go back home. To be anywhere but with this woman who had betrayed him.

But before the man could open his mouth to explain, the Whitsons’ Audi was rear-ended, and spun careening across the BQE. The impact of the collision was severe. Martha’s airbag deployed and she slammed into it, losing consciousness briefly. She was badly concussed but would recover. Relatively speaking she was lucky.

Whether the accident was really an accident was never determined, though Blair Whitson’s whereabouts at the time of the collision were never determined, and his BMW was at his mechanic for a suspicious period of time after the fact. What is known is that when Martha awoke in a room at Greenwich Hospital the next morning, Blair was sitting by her bed reading the paper, muttering to himself, “They both won. Somehow they both won. The men and the women. They both won. We won it all.” But Martha knew that no one in Connecticut really wins except the laundry. Not in the long run.

The boy would wake up hours after the accident, and find himself alone. He would nod to himself, not yet knowing his father’s fate, but having learned enough from his father to know it anyway. He made do for 48 anxious hours.

When the man made it home to his apartment he was barely mobile. He had been thrown from the car. His leg and a handful of ribs were badly broken. He would be forced to give up his job at the plant. His period of extreme convalescence would last weeks. Debts would accrue. A settlement made on behalf of the Whitsons’ insurance company would cover only 70 percent of them. The man did not think much of the difference. Those sorts of percentages were Connecticut numbers, and he knew from his time spent a decade earlier building stone walls in Connecticut that when you use Connecticut numbers, no one wins. He had his life and he had his boy, and he had another Knicks season in the fall. What else matters?