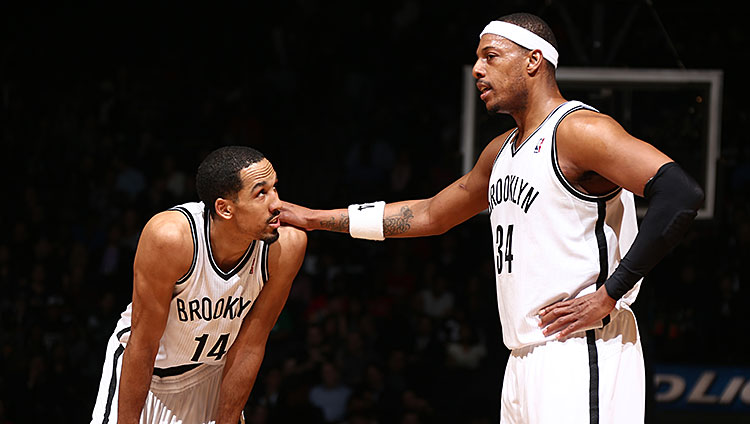 The Brooklyn Nets are 33-13 since January 1 — the third-best record in the league during that time. It’s quite a turnaround for a team that was left for dead after Brook Lopez’s season-ending injury. Ironically, it’s been that bit of medical misfortune that opened the door for a broken Brooklyn team to become the biggest wild card in the upcoming playoffs.

Rather than promoting a reserve big man to replace Lopez, head coach Jason Kidd chose to completely remake the team’s image. Kidd asked everyone from Kevin Garnett to Joe Johnson to move up a position. Paul Pierce is now a full-time 4 for the first time in his career, and former prodigy turned journeyman guard Shaun Livingston eventually got tapped to round out the starting lineup. It’s always a bold move to change your team’s identity so drastically on the fly, but so far it’s paid off handsomely for the Nets. Thanks to those changes, a previously disjointed collection of veteran talent has now morphed into a cohesive unit.

Brooklyn essentially swapped Livingston for Lopez, replacing a ball-dominant big man with a true facilitator. Livingston is like a stagehand who creates the environment for the key performers to showcase their talent. His ballhandling, passing, and off-the-ball movement — Livingston excels at cutting into an open lane from the weak side — were things the Nets sorely lacked with Lopez in the starting lineup.

Livingston’s emergence freed Deron Williams from the role of primary (or sole) off-the-dribble creator. With someone else to run the offense, Williams became a more efficient scorer. According to the stats site NBAwowy, Williams’s effective field goal percentage (which weights for 3s) is more than five points higher when he shares the floor with Livingston.

But Livingston’s impact likely wouldn’t be as strong had it not coincided with Pierce’s move to the 4. The Nets were able to enjoy all of Livingston’s strengths as a playmaker and cope with his flaws as a spot-up shooter because of Pierce’s ability to pull at least one opposing big man all the way to the 3-point line. This never happened with the Garnett-Lopez frontcourt. The move to power forward seems to have helped Pierce snap out of an early-season funk. His effective field goal percentage has risen eight points since January 1, likely because he’s had more opportunities to drive by or shoot over power forwards, unaccustomed to defending on the perimeter.

Shuffling the Deck on Defense

This “long ball” lineup has helped on the defensive end too. With Lopez, the Nets ranked 28th in defensive efficiency. Now they’re 10th. That improvement is all the more impressive when you consider their recent stretch came without Garnett, their defensive linchpin, patrolling the back line.

This defensive improvement is also down to Brooklyn’s post-Lopez versatility. The 6-foot-3 Williams is the team’s shortest rotation player, and with the 6-foot-7 Pierce logging his minutes at the 4, the Nets can go long stretches with four players capable of switching assignments with minimum repercussions.

The Nets have leapt from 21st in 3-pointers attempted to third since 2014 rolled around, averaging more than 25 a game. They play at a glacial pace and emphasize their backcourt size. Livingston, Williams, and Johnson are all very strong post-up players (though Johnson’s Synergy numbers this year are underwhelming), while big man Andray Blatche has emerged as a solid low block/isolation presence for the second unit. Brooklyn ranks 16th on post-ups per game and fifth in isolations — which are very similar play types in most respects — according to Synergy Sports. The Nets have basically become an inverted post-up team, employing a carousel of oversize guards on the block (or near it) instead of a traditional back-to-the-basket behemoth.

Built for the Playoffs

Making a run to the NBA Finals means the Nets, currently occupying the fifth spot in the East, will likely have to vanquish both the Heat and the Pacers — two teams with drastically different styles of play. But when you combine Brooklyn’s new defensive tricks with its unique approach on offense, you have a team with the tools to exploit the weaknesses of the conference’s two overwhelming favorites — something it’s already shown after sweeping the season series against Miami last night.

As Zach Lowe detailed last week, Indiana is a complete mess on offense right now. If a team can unlock the Pacers’ defense four times in a playoff series, it can advance; the Pacers’ offense will not bail them out. And the way to unlock that once staunch D is by spreading Indiana out and making its two traditional power forwards — David West and reserve Luis Scola — defend on the perimeter. West has a lot of positive attributes, but guarding in space or helping and recovering to a perimeter shooter isn’t one of them. Ditto (obviously) with Scola.

It’s hard to find useful data in this area because of the nuanced tracking it entails, but on film the Pacers (like most teams) seem to be at their most vulnerable when teams field at least three shooters and either run pick-and-rolls or attack in quick isolations.

To beat the Heat, the Nets will have to do two things (outside of, you know, playing out of their minds).

• Have multiple defenders to run at LeBron James

• Be able to attack their defense through the post

Because of its new(ish) lineup, Brooklyn is well equipped to do the first. Livingston, Johnson, and Pierce have all spent time checking James this season, with Andrei Kirilenko likely thrown into the mix should these two teams meet this spring. Not only do multiple defenders keep James off guard over the course of a series, but on a per-possession basis, they allow the Nets to effortlessly switch things that cause most teams trouble — like those pesky James–Dwyane Wade screens.

When it comes to the other end of the floor, using pick-and-rolls against Miami is a very dicey strategy. When the Heat are active and engaged (which, even in the playoffs, isn’t always the case) it’s nearly impossible to find good shots out of pick-and-rolls. While most teams drop a big man back toward the paint in a more passive attempt to contain pick-and-rolls, Miami attacks its opponents by sending two players — both the man guarding the ball and the man guarding the screener — after opposing ball handers. This type of aggression can leave the Heat vulnerable to teams that move the ball well, but it also creates total chaos for the unfortunate soul dribbling off the screen. Miami forces turnovers from opposing ball handlers in pick-and-rolls more than any other team in the league. And it’s not even close.

Luckily for Brooklyn, it typically relies on post-ups and isolations more than pick-and-rolls. So instead of its natural offensive identity playing into Miami’s hands, it can attack playing to its strengths. Even more promising for the Nets is that, according to Synergy data, some Miami defensive Kryptonite is through the post. Norris Cole, Mario Chalmers, and Ray Allen — three players who will be responsible for checking Brooklyn’s big guards — all rank near the bottom third of post defenders, according to Synergy data.

Four months ago, the East appeared to be a two-team race. Now that Indiana is struggling and Miami is showing flashes of mortality, the opportunity for an unexpected playoff push exists. The versatile Brooklyn Nets are poised to take advantage.