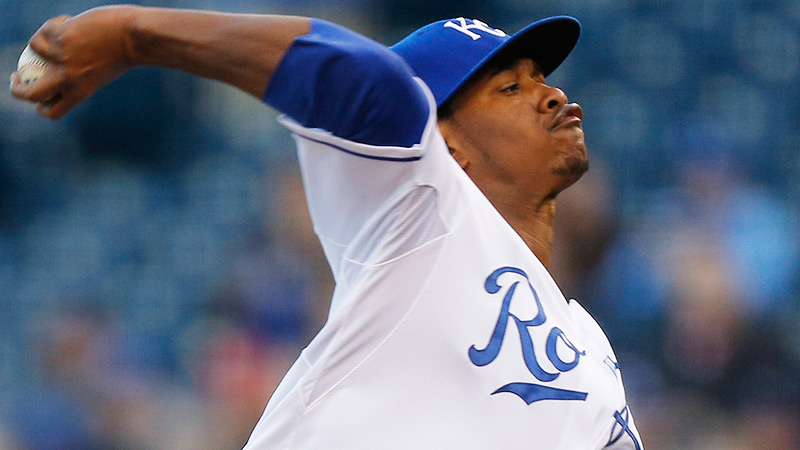 I wish I could borrow Nathan Lane, dress him in an outrageously bright double-breasted suit with frightful lapels and a paisley ascot to match, and ask him to sing one line in a crisp, mischievous tenor: “Yor-DAAAAAAAAAAA-no!” Over and over again, arms spread as though Lane were parting the Red Sea.

Because that’s how I feel about Yordano Ventura, and I need someone to help me explain it to the world.

Ventura made his 2014 debut on Tuesday night, and, my goodness gracious, was Kansas City’s Happy Meal–size top pitching prospect as good as advertised. Ventura, sauntering about the mound like someone James Shields’s size, blasted upper-90s fastball after upper-90s fastball past Rays hitters, mixing in a mid-80s curve and a changeup that, at times, reached 89 miles an hour — or, as Ventura’s teammate Bruce Chen would say, “Faster than it’s physically possible to throw a baseball.”

When I was a kid, I read a book in which alien robots came down from space and challenged a Little League team to a game of baseball. The aliens threw 700-odd miles per hour, but one kid timed the pre-pitch light sequence and hit a home run on a ball he couldn’t see. Ben Zobrist must have also read that book, because that’s what it looked like he was trying to do against Ventura. Zobrist wasn’t alone: One changeup to Wil Myers made the reigning AL Rookie of the Year go all limp at the joints and fall over the way Woody from Toy Story does whenever a human turns around to look at him.

You know which Ray I felt really bad for, though? Chris Archer, also one of baseball’s more charismatic and talented young pitchers, who wasn’t as electric as Ventura, but who was close. Archer vs. Ventura reminded me of the 2002 Little League World Series classic in which Kentucky’s Aaron Alvey struck out 19 in nine no-hit innings and Texas’s Walker Kelly struck out 21 while allowing two hits over the same span. It’s worth noting that Kelly and Alvey, even as 12-year-olds, looked older than Ventura and Archer do now. (By the way, there should be a 30 for 30 about that game, considering both how great it was in a vacuum and the role it played in imposing pitch counts for Little League pitchers.)

Considering that Tommy John surgery is going around baseball’s top under-25 pitchers the way mononucleosis spreads through a high school marching band (and considering fellow youngsters Matt Moore and James Paxton were injured this week), we can hardly blame Ned Yost for pulling Ventura after 95 pitches and six innings, even if those innings were scoreless, and Ventura had twice hit 100 mph while striking out six, walking none, and allowing only two hits. The Royals eventually lost, 1-0, but Ventura delivered a winning effort.

Royals fans will say the hope for Ventura going forward is that he leads a forlorn franchise back to the promised land.

Yordano Ventura is here to wash away my pain and suffering.

For non-K.C. partisans, the hope for Ventura going forward is that he avoids the elbow gremlins and avoids having his personality beaten out of him as he matures, because in addition to being a flamethrower, he’s a character on the mound. Take the top of the second inning of Tuesday’s game, which Alex Gordon ended on an impressive catch that led to him hitting the wall like he’d been racing too close to Austin Dillon.

We got the total package from Ventura on Tuesday: a dominant pitching performance, and an impression of the face that batters make when they see his changeup. I can’t wait to see it again.

The Toronto Maple Leafs, this year's test case for old-school hockey vs. advanced stats, have been eliminated from playoff contention. You should read Sean McIndoe's piece explaining the debate.