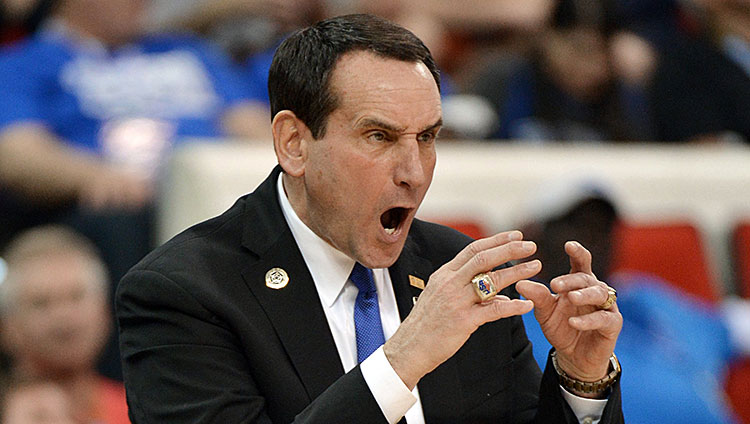 Over the weekend, the unpredictable NCAA tournament waved good-bye to three of its biggest names. Kansas and Syracuse got hit in third-round upsets, while Duke was unexpectedly upset in the round of 64. That three of the better teams in the tournament crashed out early isn’t much of an anomaly; Cinderella needs evil sisters, after all. What is somewhat shocking, however, is how all three met their fates.

Bill Self, Mike Krzyzewski, and Jim Boeheim have all built their programs with a trademark style of play. Self’s high-low motion offense has empowered a string of talented big men during his time at Kansas. Duke teams have always been known for the in-your-face, pressure man-to-man defense that embodies the personality of their legendary head coach. And even the mention of a 2-3 zone conjures images of Syracuse orange in the mind of any college basketball fan.

These schemes have largely been the driving force behind the incredible success of these coaches (and programs). But could they also be the reasons these teams lost in the postseason? When you do something so well, for so long, it’s hard to stray from it, even if a certain matchup or unique personnel in a given season suggest you ought to.

The NCAA tournament boils down to securing victory in a single game. The win-or-go-home atmosphere often rewards short-term gambles over the long-term stability of an established system. The tactical identities imposed by Self, Krzyzewski, and Boeheim sometimes end up key factors in their disappointing tournament performances.

Here is how the three coaches’ trademark styles contributed to their disappointing results in this year’s tournament.

Self’s high-low system is predicated on the interaction between two big men inside the the 3-point line. The goal of the offense is to feed the ball into a posting big man as often as possible. It’s essential that the frontcourt personnel have the skills to operate from both the high (both elbows to the top of the key) and low (the block) post areas. They usually do; six Kansas big men have been selected in the first round of the NBA draft since Self took over. The problem is that, as much as this offense empowers post players, it diminishes the impact (and, it could be argued, overall development) of the guards and wings filling the roles on the perimeter.

This is where Andrew Wiggins’s “poor” performance on Sunday comes in.

With Joel Embiid out, Wiggins and Wayne Selden Jr. had to pick up the slack. The two responded by combining to go 2-of-11 from the field for just six points. Wiggins in particular was called out by more than one pundit for not being assertive enough in such a big tournament game. One of the ways used to point out the presumptive no. 1 draft pick’s shortcomings was to note how unheralded frontcourt duo Tarik Black and Perry Ellis combined for 27 points.

But before heaping the blame on Wiggins, let me throw another number at you: two. That was the number of scripted plays called for specifically for the star freshman over the course of the entire game on Sunday. And one of those plays — a pin-down set against a rare man-to-man look from Stanford — ended up with Naadir Tharpe misreading a cut by Wiggins and throwing the ball away.

While Wiggins has taken over plenty of games, despite Self’s offensive principles, it’s not a shock that a 19-year-old playing in the biggest game of his career, against an opponent using multiple defenses, failed to find his rhythm. Black and Ellis succeeded because of Self’s steadfast dedication to using his two post players to combat both the man-to-man and zone looks from Stanford. The 27 points came from countless opportunities. Had Self looked to call more quick hitters for Wiggins or perhaps let him, instead of Black or Ellis, operate near the foul line when Stanford went into its 2-3 zone, that might have allowed the young star to get into a better rhythm. But by sticking to his tried-and-true methodology, Self failed to get Wiggins into the game, and perhaps because of it, his Kansas team won’t be playing another one this season.

The Mercer Bears were a nice story, but hardly an offensive juggernaut. They finished the season ranked a respectable 75th in KenPom.com’s adjust offense rankings, yet still managed to score 78 points on the Blue Devils in a game that wasn’t particularly fast-paced. Mercer’s upset win — along with Lehigh’s two years ago and Louisville’s 85-63 demolition in last year’s Elite Eight — can all be attributed to the same thing: Duke’s got tripped up by its own pressure D.

Though he’s tweaked things offensively due to his experience with USA Basketball, Krzyzewski has never relented on his on-the-line, up-the-line, man-to-man system designed to harass ball handlers and deny passing lanes. The downside to that intense pressure is that it leaves on-ball defenders on little islands with help rotations much farther away than those in more “gap”-style defenses (where defenders help protect against drives rather than deny passing lanes).

Mercer used the inside presence of Daniel Coursey, dribble penetration against defenders playing too tight, and ball movement to take advantage of Duke’s frenzied rotations. The Bears turned the game into an assault on the rim. According to Synergy Sports data, Mercer had 24 shots in or around the rim (compared with Duke’s 16), while also going to the line 28 times.

Coursey (7-of-12 for 17 points) was basically allowed to play one-on-one in space all night. Had Coach K checked his defensive aggression at the door and opted for a more conservative approach, he would have, at the very least, kept Mercer off the free throw line, and that alone would likely would have staved off the upset.

’Cuse gets trapped in a zone by Dayton

The Orangemen finished the regular season 14th in KenPom’s adjusted rankings, thanks to Jim Boeheim’s aggressive, 2-3 zone. Yet a big part of the team’s success on defense was its ability to force turnovers out of what is traditionally a passive scheme. According to Sports-Reference.com data, opponents turned the ball over on 19 percent of their possessions, putting Syracuse in the top 25 in the country. So many dead possessions not only lead to an edge in field goal attempts, but also obviously create chances for easy baskets in transition — an area where Syracuse engineered just over 10 points per game this season.

In some ways, the Dayton game wasn’t much different from what we’d come to expect from Syracuse. The Flyers scored only 55 points, turned the ball over 14 times, and were outshot from the field (54-46). The difference, however, was that of Dayton’s 14 turnovers, only four were “live ball” turnovers that allowed the Orangemen to get out in transition. In a two-point loss, Syracuse ended the game with just six transition points, according to Synergy Sports, four fewer than its season average. It goes without saying that those four points would have made quite the impact.

Because of Dayton’s patience against the zone, the game as a whole turned into a half-court slugfest. That not only limited possessions — an advantage for the lesser talented team — but also put the Orangeman’s offensive warts, primarily a lack of outside shooting, on full display. Had Boeheim elected to stray from his beloved zone and mix in some full-court man-to-man schemes for short periods in an effort to speed up the game, it might have created a few more transition opportunities. Converting a few easy baskets on the break might have allowed Syracuse to overcome a cold-shooting night and advance at least one more round in the tournament.