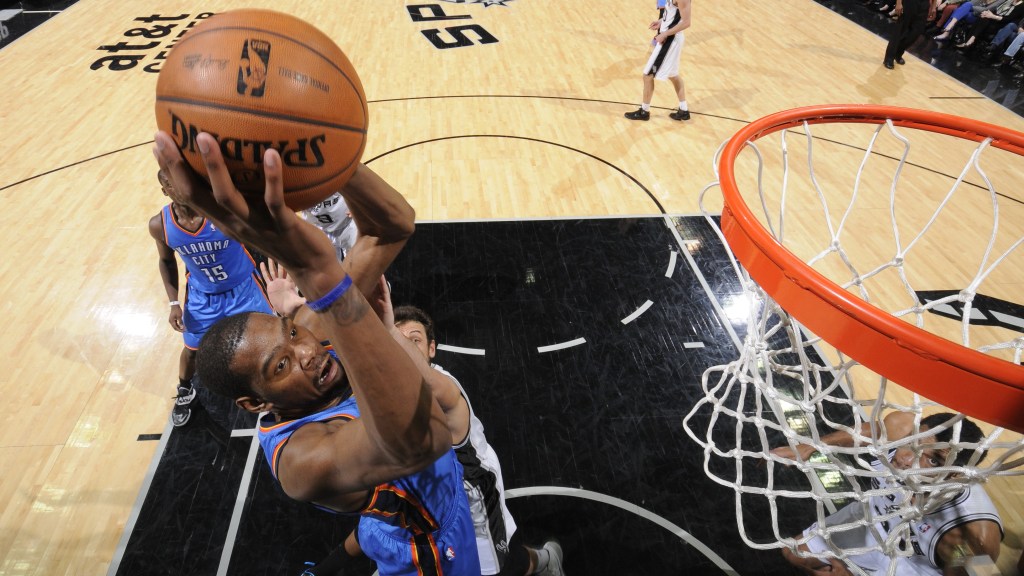 In case you were out learning valuable lessons on when it’s inappropriate to go Beast Mode, here’s what you missed in sports on Wednesday:

• Thunder forward Kevin Durant scored another 36 points, and point guard Reggie Jackson continued to torment the Spurs as Oklahoma City beat San Antonio, 111-105, to grab pole position in the Western Conference. “Yes, it is I who Reggie torments,” Spurs point guard and noted Frenchman Tony Parker said after the game while fumbling with an unopened pack of Gauloises. “Yet it is also I who is kept alive by the torments of Reggie.” Parker continued to struggle with the wrapper as he mused, “To be human is to itch: to suffer the uncomfortable pangs of hunger when presented with poorly constructed non-Gallic foods, to feel an ache in the loins when a beautiful woman is seen, to know the moment of longing one feels when their pack of cigarettes will not open!” Parker then threw the stubborn pack of cigarettes in the air, only to have it unfold like a blossoming flower and present him with two already lit cigarettes. He took deep drags off both, one, then the other, before adding, “This feeling I have now? This Gauloise-based itch scratching? This is just me losing my humanity. A smooth and delicious loss of humanity.”

• The Phoenix Suns continued their surprising run as they put up a big number on the NBA’s best defense, beating the Indiana Pacers, 124-100. Suns head coach Jeff Hornacek was visibly confused after the game, saying, “Beats me, guys. I mean, I still don’t know how I was good. How do you expect me to understand how Gerald Green can suddenly rip apart Paul George?” But as he walked out of his press conference, Hornacek wiped his face, suggesting that either a secret message had been left unsaid, or that his face was sweaty.

• Masahiro Tanaka is headed to New York, after the Yankees signed the highly touted Japanese starter to a $155 million seven-year contract. Yankees general manager Brian Cashman seemed pleased with the signing, saying, “We’re coming off a hard year. A really, really hard year. And we’ve learned valuable lessons. But I think with Tanaka we have the team we need to be competitive in the division now. Next question?” The next question was, “I heard you, and I appreciate the flowers, but when are you going to leave my home, Brian?” and it came from former Yankees closer Mariano Rivera, whose house Cashman was refusing to leave until Rivera agreed to just come for the first day of spring training to see if he liked the feeling.

• Red-hot Nik Stauskas had 26 points as Michigan stayed undefeated in Big Ten play with a 75-67 win over the Iowa Hawkeyes. Michigan now will head to Lansing to play Michigan State in what’s being called “A BASKETBALL GAME BETWEEN THE SPARTANS AND WOLVERINES TO BE PLAYED ON JANUARY 25” by robots everywhere.

• The Detroit Red Wings got a boost in the Eastern Conference playoff race as they gutted out a 5-4 shootout win over their former division foes, the Chicago Blackhawks. “They’re still our rivals,” Blackhawks star Jonathan Toews said after the game. “But I miss them now. We haven’t played them since last season. It just feels wrong. I checked Henrik Zetterberg into the boards, and it felt all weird. It’s true what the power ballad says.” Toews then dropped a rose on the ground as a tear rolled down his cheek while he belted, “You don’t know what you got, till it’s gone!”

• Even with Juan Mata reportedly on his way, Manchester United’s nightmare season continued as the Red Devils were eliminated by Sunderland in penalties after drawing 3-3 on aggregate in the semifinals of the League Cup. “Look, there’s no silver lining on this one,” United manager David Moyes said after the match. When asked if he was worried about being sacked, Moyes replied, “The more immediate concern is that I’ll wind up a sad-sack bit character played by William H. Macy. It won’t even be a biopic about me. It’ll be about Jose Mourinho. I never should have left Everton.”