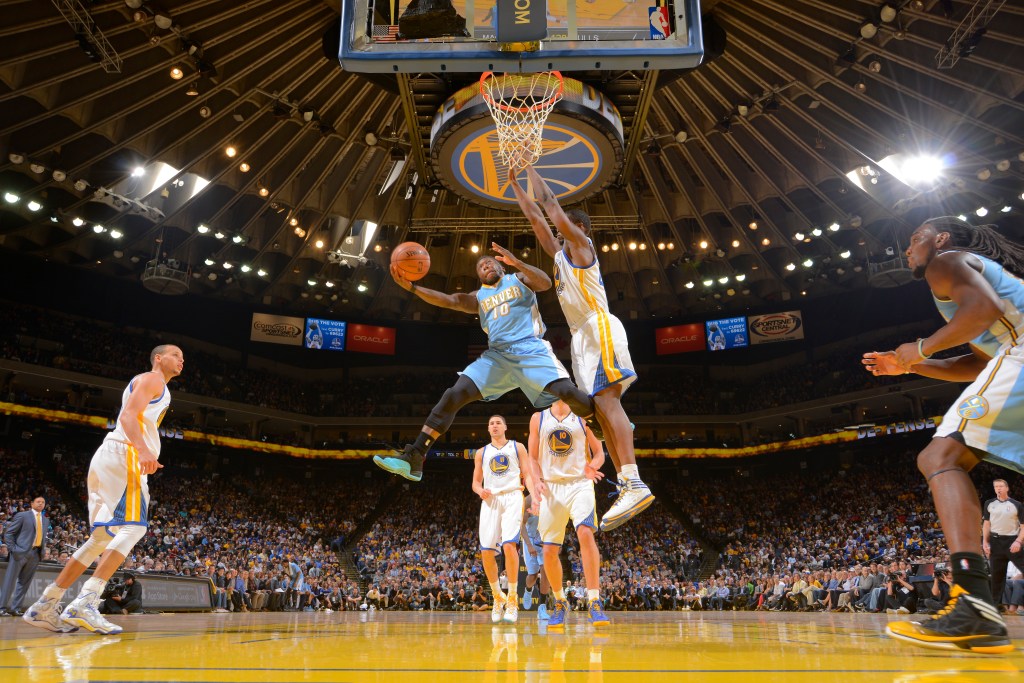 In case you were busy failing to convince your friends that Lea Michele and Lea Thompson are the same person, here’s what you missed in sports on Wednesday:

• Nate Robinson’s 14 fourth-quarter points proved instrumental as the Denver Nuggets grabbed a surprising 123-116 overtime road win over the Golden State Warriors. “I love beating my old team, and I got to do that twice tonight,” Robinson explained after the game. When asked what he was talking about, Robinson demurred, but it should be noted that the Cal Bears grabbed a shockingly lopsided 82-56 win over Robinson’s college program Washington behind a monster first-half effort from mustachioed and diminutive walk-on freshman Robin Nathanson.

• The Miami Heat dropped their third straight game as the Washington Wizards surged out to a huge lead that they would never relinquish in a 114-97 win. The game’s real wizard, however, was Guringmol the Lewd, who provided Heat center Greg Oden with an elixir made primarily from virgin deer uteri, allowing the beleaguered former top pick to play eight minutes and score six points in his first regular-season appearance in four years.

• It took three overtimes, but the Chicago Bulls gritted out a 128-125 win over the Orlando Magic. The Bulls are now 4-1 since Luol Deng departed, but he certainly couldn’t have been the one undermining the Bulls from the inside the entire time, could he? I mean, Bulls head coach Tom Thibodeau personally assigned Deng to figure out who was subverting the Bulls organization … of course! Deng was investigating himself the entire time! And his karmic punishment was getting shipped off to Cleveland before being discovered, which is well known to be a fate worse than death! And look, there’s a rat running across the wall outside my house! Oh, it’s all coming together.

• Seahawks cornerback Richard Sherman admitted there’s “no love lost” between his team and the San Francisco 49ers in advance of their showdown in the NFC Championship Game. Sherman then said with his trademark smile, “No love lost at all. My cup of love for the 49ers is still full to the brim,” before presenting 49ers quarterback Colin Kaepernick with a “Skraeperbook” of special moments the two men have shared over the past two seasons. Sherman then opened to a page and said, “This is the best. This is the Jim ‘Heart-Baugh,’ made out of pink construction paper and actual khaki fabric from Harbaugh’s pants, because I just love that dude so much. No love lost, man. No love lost.”

• Alex Ovechkin’s 34th goal was not enough, as the Pittsburgh Penguins came from behind to beat the Washington Capitals 4-3. “This is just a classic rivalry getting another chapter,” Penguins captain Sidney Crosby said after the game, “and it’s not just these teams anymore. Pittsburgh and Washington are going head to head in everything including … um … well … ” Crosby paused, furrowed his brow, and said, “I mean, Georgetown and Carnegie Mellon have to be at each other’s throats over biotech research, yeah? Or business school admissions? Right? Please don’t make me back down from this.”

• Dodgers starter Clayton Kershaw has reportedly signed a seven-year, $215 million contract, representing the largest contract in terms of average annual value in Major League Baseball history. “But what about adjusted for inflation, hmm?” asked Alex Rodriguez while sunning on the back of the southbound yacht Deceit, which he co-owns with Chris Brown and Lil Za. “Hmmm? I still think I’m the no. 1 most paid baseball man, if you get deep into the math. Isn’t that right, new best friends JP Morgan Chase CEO Jamie Dimon and former Citigroup CEO Vikram Pandit?” Both men nodded at Rodriguez, who smiled and added, “Those two bros are chill. Chill for real. Plus, they’re beloved by America, much like everyone on this yacht, so that’s helping with the ol’ Rodriguez image. I got my new PR person, that girl who tweeted racist stuff on a plane to Africa. I got the actress who played Chandler’s girlfriend on Friends to be the girlfriend to all my friends. I got Fieri in the kitchen, whipping up grub. Plus I got three weird-looking German guys with accordions! They’re here, too! This yacht is gonna be a nonstop Rodriguez image rehabilitating polka party all the way to Venezuela, so suck on that, Kershaw!”

• Break up the Anaheim Ducks, who have now won 19 of 20 games, after throttling the Vancouver Canucks 9-1. “Oh, how gauche,” said rival goalkeeper Jonathan Quick of the Los Angeles Kings. “Nine goals? Classic classless Orange County conspicuous consumption. Taste is beating the Canucks 1-0. You want a McMansion and a Hummer with that unnecessary blowout, Anaheim? Disgusting.”

If You're Wondering Whether Clayton Kershaw Is Worth $215 Million, Read This

What Clayton Kershaw's Historic Deal Means for the Pitcher, the Dodgers, and Small-Market Teams