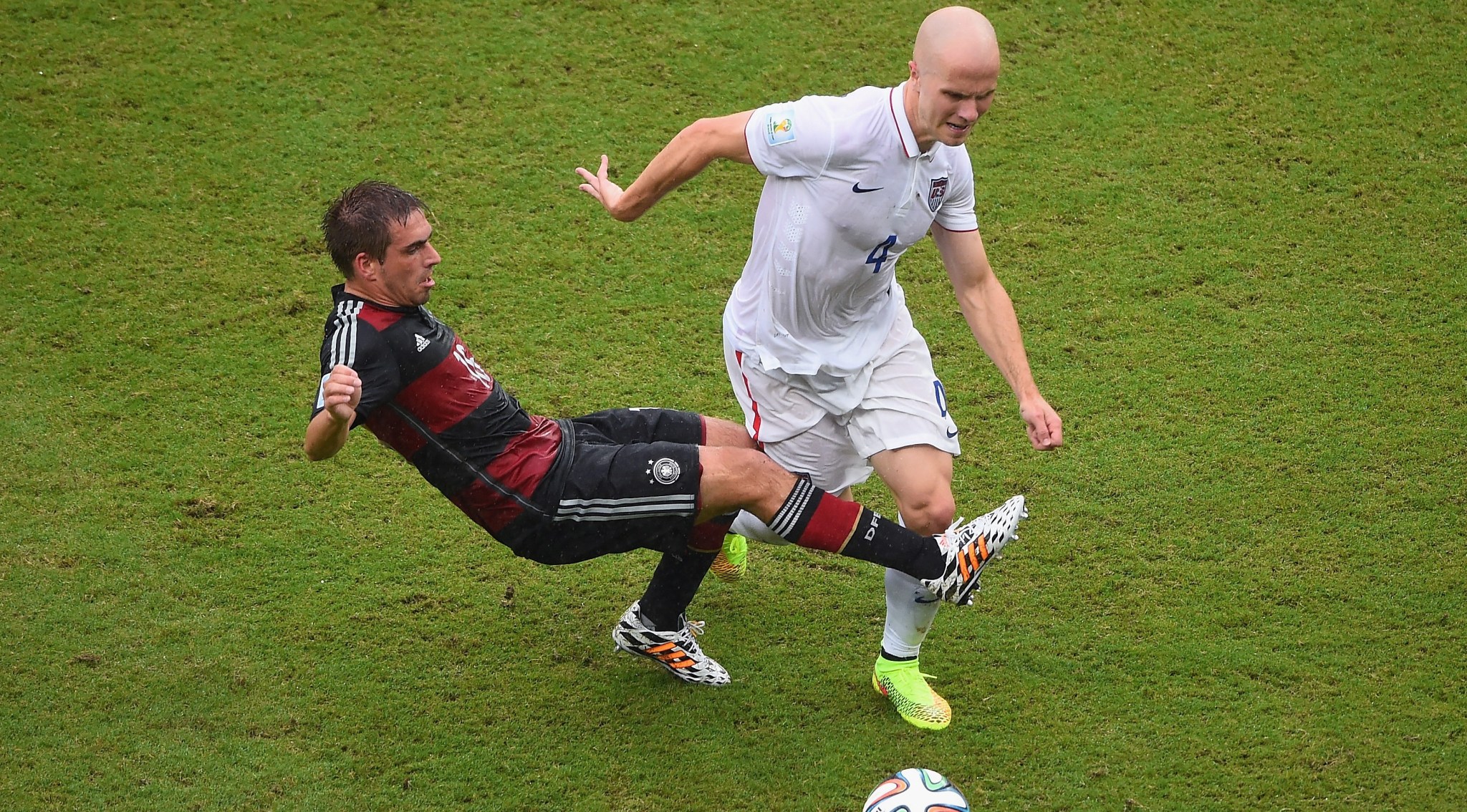 In case you were cracking wise at a hipster hootenanny in São Paulo with your fancy friends with their bright buckles and colorful belts, here’s what you missed in sports on Thursday:

• Team USA held on for a glorious 1-0 loss to Group G winners Germany, advancing to the knockout stage by virtue of earlier results and Portugal’s 2-1 win over Ghana. “I guess I’m happy for the team,” said former Florida Secretary of State Katherine Harris. “But there’s something about turning a clear loss into a win that just doesn’t feel very American to me.”

• The Red Devils of Belgium survived an early red card to beat South Korea, 1-0, winning Group H and securing a berth in the knockout stage, where they’ll be joined by Algeria, who went through on the strength of a 1-1 draw with Russia. “Yeah, you’re riding high now,” said the ghost of Napoleon, who showed up in the Algerian locker room after the match. “But believe me, a draw with Russia ain’t all it’s cracked up to be.” The ghost of Hitler, materializing by his side, nodded wearily at the confused team. “Talk to me in a month when you’re eating muddy snow three meals a day and wondering what you thought was so great about Saint Petersburg in the first place,” he said, before catching himself and rolling his eyes. “Oh, excuse me … Leningrad.”

• Going Canadian with the first pick of the NBA draft, the Cleveland Cavaliers selected Kansas one-and-done star Andrew Wiggins, while the Bucks nabbed Duke’s Jabari Parker second. The 76ers opted to take Joel Embiid with the third pick, though GM Sam Hinkie told reporters it went against their first instinct. “We think his foot is totally effed,” said Hinkie, “but [NBA commissioner] Adam Silver threatened to send our entire front office into something called ‘The House of the Undying’ if we chose anyone else. Frankly, we were all pretty terrified.”

• Rounding out the top 10 in the draft were Aaron Gordon (Magic), Dante Exum (Jazz), Marcus Smart (Celtics), Julius Randle (Lakers), Nik Stauskas (Kings), Noah Vonleh (Hornets), and Elfrid Payton (76ers). Hinkie was forced to select Payton despite the team’s overriding suspicion that he’s a mischievous forest sprite from a lesser-known Shakespeare comedy. “That’s ridiculous,” said Payton when he heard the rumors. “I am merely Elfrid, son of trees and friend of bees.” He then tittered merrily and blew a handful of dust on Hinkie, who now loses his eyesight every time he gets an erection. (Payton then used his powers to get traded to the Magic.)

• Lukas Rosol nearly stunned Rafael Nadal at Wimbledon for the second time in three years, but the Spaniard saved a set point that would have put him down two sets to love and rallied back for a four-set victory to advance to the third round. In the locker room after the match, Nadal could be heard complaining loudly about “la arcilla que crece pelos verdes,” or “the clay that grows green hairs,” as he bathed in a giant tub of imported Spanish dirt.

• In her bid to win a sixth Wimbledon title, Serena Williams cruised to an easy second-round win over Chanelle Scheepers, bludgeoning the South African 6-1, 6-1 in just 49 minutes. Again, I want to emphasize that I’m talking about Chanelle Scheepers the tennis player, guys. Not “Chanel Sheepers,” the new fragrance for people who have sex with livestock.

• Vance Worley pitched seven strong innings and hot-hitting rookie Gregory Polanco continued his tear with a homer and four RBIs as the Pirates beat the Mets, 5-2, improving to 40-39. “Another crazy win!” shouted David Wright, wearing a fake mustache and a knockoff Pirates uniform as he walked into the Pittsburgh locker room after the game. “Who wants some pizza?!” Pirates manager Clint Hurdle shook his head as he watched the spectacle, knowing it would be sad when he made Wright leave the locker room and return to the Mets, just like it had been the time before, and the time before that …

• Ending a three-month absence due to a back injury, Tiger Woods shot a disappointing 3-over 74 in his opening round at Congressional. You know, it’s funny … with icons like Woods and Phil Mickelson fading in 2014, the face of the entire sport is changing as the younger generation seeks to become the new standard-bearers for the game. But we’ve been so obsessed with Woods for the past two decades that we only have the vaguest conceptions of these new, rising stars. The more I think about it, the more it seems like a book profiling the young up-and-comers and chronicling their 2014 journeys as the sport undergoes an identity change (or is it crisis?) would be a really terrific read. I wish somebody with access would write something like that, because if it came out in early 2015 I’d probably buy a copy for myself and then a few for the golf fans I know … and since it would be such an informative, entertaining look at the golf ecosystem, I’d probably buy a few more for anyone who was even remotely interested in sports, and then of course there’s Father’s Day, and … ehhhh, who am I kidding? You can’t just dream up a book! Moving on …

• Seeking to improve team chemistry, Knicks GM Phil Jackson shipped Raymond Felton and Tyson Chandler to the Mavericks in exchange for Jose Calderon, Shane Larkin, Samuel Dalembert, Wayne Ellington, and two second-round picks. When a colleague joked to Jackson that he should have traded team owner James Dolan along with the players, he politely laughed until the man left his office, at which point he grew silent. “You have no idea what I’m capable of,” he whispered to the closed door, and then slid open his desk drawer to take a long, satisfying look at the black binder titled “Operation DolanDestroy.”