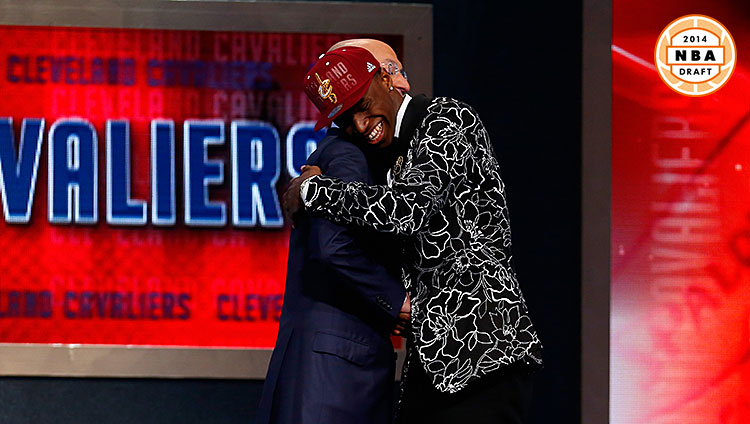 There is a gaggle of Hinkies inside the Barclays Center Starbucks. It looks like a Philadelphia suburb in here. It’s about 5 p.m., and a group of red, white, and blue Sixers shirts crowd around a laptop, hashing out trade and draft scenarios in unabashed Philly accents. What about Nash and L.A.’s no. 7? What about the 3, 10, and 32 for Cleveland’s no. 1?

A dad in line explains to his young son — wearing a Mavs Shane Larkin jersey — who Kiki Vandeweghe is, and who the Knicks might be able to get with their newly acquired second-round picks.

I suggest Thanasis Antetokounmpo, and, like a genie summoned from the NBA-nerd depths, a towering, milk-pale beanpole of a teenager in a black Joe Johnson Nets T-shirt materialized and asked if we went to any of the signing appearances that took place over the weekend throughout the city.

“I chased Giannis two blocks to get his autograph. He’s my favorite player,” Teen Iso Joe said. Then he asked, “Do you think LeBron will leave Miami?”

If you listen to the Lowe Post podcast from this week, you will hear Zach Lowe and Brian Windhorst — two of the most rational, well-connected reporters in the business — describe a volatile NBA landscape of interlocking, potentially cascading deals. It sounded like they were just waiting for Gavrilo Princip to shoot Archduke Ferdinand. Or, in this case, for Kevin Love to get traded.

There is a sense that anything could happen. LeBron and Melo to Houston? LeBron back to the Cavs? LeBron to the Clippers for the midlevel exception? LeBron signing a one-year deal with Miami and strangling Wade with his belt while Bosh holds Wade’s arms? Wiggins at no. 1? Parker at no. 1? Trade the no. 1? Anything and everything.

Seemingly every team is trying to trade its pick, pretending to try to trade its pick, or just flat-out lying about everything. At any given moment over the past week, I have had 21 tabs open, 10 Google Alerts set, and Twitter running in the background. And I still managed to miss the Omer Asik trade when it was announced.

We have entered a world of fantasy basketball brought to life, and this is exactly the way the NBA wants it. Lowe touched on this in his Asik trade post. You combine a byzantine collective bargaining agreement that promotes player movement via shorter contracts and harsher luxury tax rules; a new breed of hedge-fund executives who view the league as a pure marketplace for accruing flippable assets; impatient owners looking to make their mark; the sports-discourse bubble and its increasing obsession with “legacy”; and the bottomless 24-7-365 maw of the social-media age, and you get a league that essentially has no offseason.

Since 1980, only nine teams — the Lakers, Celtics, Sixers, Pistons, Bulls, Rockets, Spurs, Mavs, and Heat — have won the title. And yet, somehow, the NBA has managed the trick of turning an eight-month-a-year sport, with a remarkable dearth of competitive balance, into a year-round soap opera. The league has done this in part by turning an event that is essentially a reward ceremony for bad basketball teams into a borderline riotous, all-inclusive celebration of the business of basketball.

Just consider the circus that preceded draft night. The following is a probably incomplete summary of things that have happened in the 10 days between the NBA Finals ending and draft day:

• Pat Riley gave a borderline unhinged press conference in which he did everything short of pulling a set of brass balls on a lanyard from a briefcase while screaming “Coffee is for closers!”

• Mario Chalmers had a “Jeremy spoke in class today” meltdown on Instagram.

• Carmelo and LeBron opted out, taking the CBA-minutiae-inflected deal speculation from “frenzied” to “Day 4 at Jesse Pinkman’s house party.”

• Schisms were rumored in the Warriors and Cavs front offices.

• Kevin Love may have almost been traded for a Splash Brother.

Sam Hinkie treated a draft workout like the nuclear launch codes; Dante Exum emerged from high school in fucking Australia to garner comparisons to Kobe, Scottie Pippen, and Dwyane Wade; and Joel Embiid had surgery. His medical records became something pro sports teams tried to buy, and Embiid went from being compared favorably to Hakeem to recalling memories of Bill Walton’s feet. Oh, and at some point, he tweeted this:

Then he deleted it. Welcome to the NBA, Joel. This is where fuckery happens.

Back to Barclays. It’s showtime, and Sixers fans are everywhere. Even before Adam Silver takes the stage, chants of “Let’s go Sixers” rain down. Philly turned up tonight. This is their championship; this draft is tanking’s final victory.

As lively as the atmosphere in the arena is, despite being here in person, it quickly becomes clear that the only real way to follow the news of the night is through social media. Silver’s onstage announcements are no match for reporters with league sources and Twitter accounts.

Andrew Wiggins at no. 1 hits my TweetDeck about a minute before the draft clock hits zero; it’s the same with every single other pick, all night. All over the arena, people are checking their phones, leaning over to tell their friends what’s coming. At one point, Yahoo’s Adrian Wojnarowski was legitimately four picks ahead of corporeal reality. It’s like watching Game of Thrones with someone who has read the books and keeps telling you who’s about to die.

Apparently @WojYahooNBA knows things before they happen. "He ruins everything," says the reporter to my left.

To follow the NBA in 2014 is to enter a state of augmented reality. The granular, deals-within-deals level of detail needed to really understand the league on draft night is only accessible through Twitter, which has basically become the NBA’s real-time Bloomberg terminal. The CBA rules act as the league’s DNA, mandating its structure — which players move, who can be kept, and for how much. The only way to even try to understand it is online. The currency of fandom is hope, and the draft is the embodiment of that hope. This focus on the deal has elevated the front-office executive to a weird sort of stardom while ever so subtly dehumanizing the players. You know, assets. 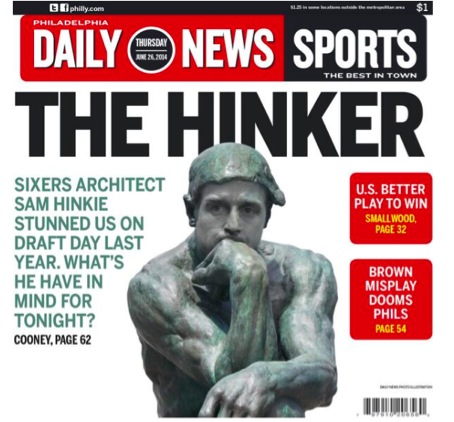 So it was heartening that Silver and the NBA took a moment to recognize Isaiah Austin, whose pro basketball dreams were cut short by a diagnosis of Marfan syndrome during a draft physical. After the 15th pick, Silver announced Austin as a ceremonial selection of the NBA, and the former Baylor center took the stage to a standing ovation.

It was a touching moment, a nice reminder that players are more than their stats and cap figures.

The NBA has always marketed its stars. Now it’s marketing its marketplace. Tanking for picks, swapping picks, stashing players in Europe like the Adriatic League is a 401(k) … it’s fun to follow, no doubt. But, when you consider what the draft really is, draft night and its assorted bartering is a little like rearranging the deck chairs on several Titanics, and selling tickets to the rearranging ceremony.

The NBA wanted a hot stove league; what it got is a forest fire.

End of the night. Past security, past the rows of laptops and television cameras, I take the steps up from the arena floor into the seats of the lower bowl. Barclays is emptying out. At the landing, leading out to the concourse, NBA deputy commissioner Mark Tatum appears on the stage below to announce the Knicks’ pick at 51. New York had already taken Cleanthony Early at 34. As I leaned over the railing to watch, Tatum announced Thanasis Antetokounmpo. Starbucks Dad and I hit both of our picks.