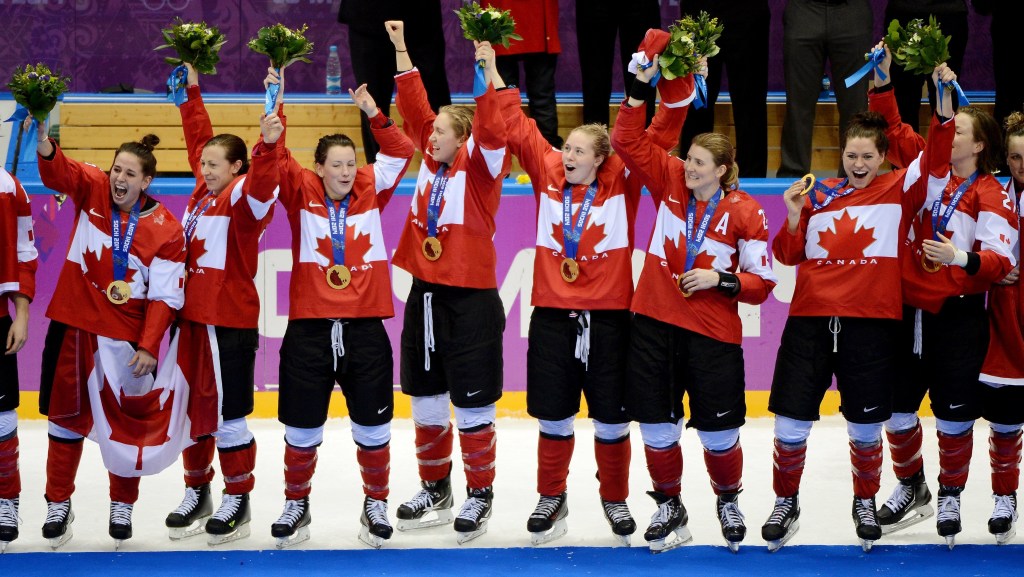 In case you were busy saying a long good-bye to Steve Blake, here’s what you missed in sports on Thursday:

• In a thrilling gold-medal game, the Canadian women’s hockey team overcame a late two-goal deficit to beat America 3-2 in overtime. Now we here at About Last Night try to steer clear of politics, but there’s only one option in the face of such a horrific international incident: sanctions. No more trade with Canada until they let Phil Kessel score a hat trick tomorrow. And if they don’t? Close the border permanently. This sort of unjustified Canadian aggression cannot be allowed to stand.

• A late rally from North Carolina was the difference as the Tar Heels knocked off their archrivals Duke 74-66. “Tough to lose, but this is what I live for,” said Duke head coach Mike Krzyzewski after his team’s defeat. When asked if he was referring to the rivalry, Krzyzewski shook his head and said, “No, I loathe playing North Carolina. But I live for imparting life lessons. And, oh boy, it is life lesson time tonight. So if you’ll excuse me, I have some after-school specials on losing with dignity on VHS that I need to show a group of dejected young men.” Krzyzewski then pulled out one tape and said, “Oooh! This one features a young Jason Priestley learning how to say no to drugs. Excellent.”

• LeBron James may have had his nose broken, but he emerged triumphant as Miami beat Oklahoma City and Kevin “Muffins” Durant 103-81. “But what are the branding implications of James with a broken nose?” asked Miami social-media guru and brand aficionado S’Ning after watching James go down. “I mean, can we even begin to dissect the cross-media ramifications of a masked LeBron? This is both a potential opportunity and also a pit full of branding vipers, were James to misstep. It’s like Lao-tze always says: ‘With great power come great opportunities.’ And also: ‘When you wear the mask, you’re smoking.’ And also that riddle where it turns out the doctor was the kid’s mom.” S’Ning then adjusted his puffy fedora that he stole from the set of a Jamiroquai music video and concluded, “Lao-tze said lots of stuff relevant to this nose situation.”

• It took overtime, but Steph Curry and the Golden State Warriors were able to take down the red-hot Houston Rockets 102-99. “Man, that’s a tough matchup,” said Warriors guard Klay Thompson after the game. “I hope we don’t face that beard in the playoffs.” When asked what he was talking about, Thompson said, “James Harden’s beard touched my arm. Twice. I feel ill. Seriously, seven games of that and I fear I’ll contract MRSA.”

• The Milwaukee Bucks’ poor season continued with a 101-90 home loss to the Denver Nuggets. Milwaukee is now a disappointing 10-44 on the season, but they have been able to make one young man’s dream of starting at point guard in the NBA come true. “I honestly can’t believe it,” said South Dakota State product Nate Wolters of his current workload. “Seriously, I can’t believe it. Guys, is this really happening? I just played 40 minutes of NBA basketball. And I scored 12 points, too! This is totally insane. I really hope this isn’t an elaborate Carrie-style prank.” Wolters then looked up to make sure there was no bucket of blood over his head, before adding, “Seriously, guys, if you all end up laughing at me, I’m gonna be super pissed.”

• The NBA trade deadline was once again a relatively tepid affair, but the Pacers still managed to make some noise, dealing oft-injured forward Danny Granger for 76er Evan Turner. “And Danny better stay oft-injured if he knows what’s good for him,” said Philadelphia 76ers general manager Sam Hinkie of the move, as he held a blackjack menacingly in his right hand.

• Russian figure skater Adelina Sotnikova shocked the world by grabbing gold in women’s figure skating over favorites Kim Yu-Na and Julia Lipnitskaia. Controversy reigned after the result was announced, with people questioning the sport’s legitimacy in the face of subjective judging. I for one agree: Give me soccer, which never has questions about officiating, or American football, or NBA basketball. If you ask me, subjective officiating and corruption are an absolute indictment of any sport afflicted with them, and I doubt we will hear much about the “sport” of figure skating again.