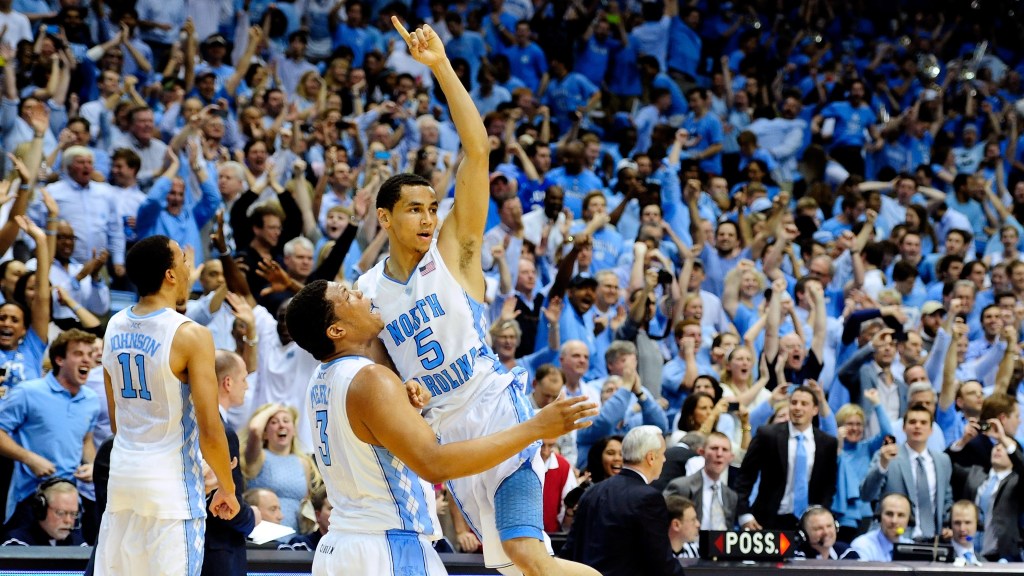 [Tentatively waiting for this headline to be rejected … ]

Is this actually something I want?

Hello, everybody, and welcome back to Grantland’s coverage of the 2013-14 college basketball season! I’m your writer, Shane, and today we’ll be talking about North Carolina’s 74-66 victory over the no. 5 Duke Blue Devils in last night’s rivalry game at the “Dean Dome” in Chapel Hill. It was the eighth consecutive victory for the unranked Tar Heels, and the third time this season they’ve beaten a top-five team. And in case you were curious about the tone of this paragraph or the stupid headline, I’m a Duke fan who is desperately trying to disassociate himself from the hellish loss by some weird combination of bad humor and a bland sports media voice not often seen on Grantland.com. If you’ve watched the parts of American Psycho where Patrick Bateman embarks on some eerily chipper monologue about Phil Collins before using a chainsaw to cut somebody to pieces, you’ll get the general idea.

Look, this is bad. I just watched my team, which I believe to be among the best in the country, lose a game because of three classic mistakes: choking under pressure, choking under pressure, and choking LIKE STUPID $%#*^$ IDIOTS under pressure. Is this a Duke-centric way of looking at the loss that denies Carolina the credit it deserves? Sure. But we’ll get to fairness in a second. First, let’s take a quick glance at how Duke’s two best offensive players fared by half:

At this point, you may find yourself screaming “small sample size!” to which I say, (a) stop screaming, and (b) I initially thought this small sample was the perfect encapsulation of each player’s personality. Duke’s best player, Parker, doesn’t want the ball when the pressure is the highest. He’s basically unstoppable in a one-on-one situation, has proven to be one of the best talents in the country, and yet he attempted only five field goals in the second half?? How? How, how, how? And Duke’s second-best player, Hood, really, really, really wants the ball after halftime, but he’d rather launch crazy 3s or long step-back 2s instead of driving to the basket, drawing contact, and taking high-percentage shots.

But this theory needed testing. So I took a glance at Duke’s schedule, and isolated the losses. Before the Carolina game, there were five: Kansas, Arizona, Notre Dame, Clemson, and Syracuse. Every loss was reasonably close, if not at the finish, then at least late into the second half. Here are Hood and Parker’s stats, by half, in those five games combined:

So I was dead wrong about Hood (whose stats I tweaked by one point and one field goal to omit the overtime session against Syracuse). He actually shot less in the second halves of these games, but his scoring output is almost equal because he got to the basket at a higher clip. Last night, for him, was a bit of an anomaly.

But Parker? Oh boy. There, the theory holds in a big way — not only does his shooting percentage dip in the second half, but he shoots less. And, fine, this may still be a small sample size, and maybe we should take it with a grain of salt since he’s a freshman and four of the losses came in tough road environments. Still, ask any Duke fan how he or she feels about Parker against average teams in average moments, and you’ll get a superlative like “best freshman in the country.” But ask how they feel about Parker when things get tense? Even the Kool-Aid drinkers will hesitate. Last night’s loss wasn’t squarely on Parker’s shoulders (truth be told, the chronically mercurial Quinn Cook was the only one who played with any courage), but it’s a continuation of an ugly pattern that figures to hurt Duke in the NCAA tournament. And the really painful part is that he doesn’t even need to “step up,” or change his style in any way. All he has to do is be himself.

But here’s another problem: Regardless of the personnel, Parker is one of the worst defensive players on the court. All the time, every time. Last night, after he gave up what seemed like three consecutive easy drives for layups, I began watching him every possession. That he struggles on the defensive end has been common knowledge all year, but the extent of it is staggering to behold; not only is he unable to guard anyone, but he barely seems to know where he should stand at any given moment. There’s no intensity, no sense of space, and he may actually be at his worst when trying to provide help defense, a situation that usually ends with an aborted attempt to take a charge and a feckless flail of the hand as the ball handler flies by.

Parker is an exceptional offensive talent who gets close to transcendence at his best, and he’s a force on the boards, but any “best ____ in the nation” labels are premature. There are too many weaknesses, and some aren’t even physical.

On a happier note, Duke looked like the better team for about 25 minutes. At that point, the score was 51-40 Blue Devils, and if you didn’t understand this rivalry, you might have entertained the notion that a blowout was imminent. Because the Duke offense, despite the lead, wasn’t even clicking at its usual historic rate. But “not clicking” and “completely disappearing” are miles apart, and in the last 15 minutes of the game, UNC outscored Duke by the emphatic margin of 34-15.

Leslie McDonald, UNC’s star-crossed senior, had the best ACC game of his career, scoring 21 points on 9-of-12 shooting and playing great defense on a number of Duke guards. Marcus Paige, after an uncharacteristically bad first half, came out charged in the second, scoring 13 points and hitting three daggers in the last five minutes. And Carolina’s legion of forwards got Duke in foul trouble, which led to a 43-30 advantage on the boards. (It seems pretty obvious, at least to me, that Duke’s season will end in March with Amile Jefferson in foul trouble, and Parker and Hood forced to defend inside. The lack of interior depth, no matter how well Marshall Plumlee fills in for short stretches, feels like a fatal flaw.)

The Tar Heels got hot from the line late in the game, but still finished at just 64.5 percent for the game. That’s on par with their season average, which is 344th out of 351 teams in Division I. Their 3-point shooting, at 31.6 percent, is bad enough to be 292nd in the country. Together, the two ugly stats reveal the central mystery of the Heels — how do they win without shooters?

The answer is a top-12 defense and lots of big forwards who grab lots of offensive rebounds. It’s an odd formula, and one which can produce embarrassing losses without warning. But as wins over Louisville, Kentucky, Duke, and Michigan State prove, they can beat anyone. Assuming the wins keep coming, Carolina will be a terrifying Sweet 16 matchup for an unprepared no. 1 seed. If UNC fans aren’t already dreaming of getting the no. 5 seed in a bracket with Wichita State, they should be.

There was a lot more going on last night than just a basketball game. Last Wednesday, a snowstorm in the Raleigh-Durham area shut down schools and businesses and highways and led to this picture, which I still find incredible. But the Duke-UNC game was set to go on as scheduled, and Carolina students were excited by the prospect of older fans staying home so they could, for once, get the good sideline seats. The student-heavy atmosphere promised to be electric.

Then the Duke team bus couldn’t make it to Durham on time, and the game was postponed until last night. Carolina fans — some of them anyway — were furious, and thought a conspiracy was afoot. Coach K didn’t want to play in a student-filled arena! He was scared! Safety concerns were put on the back burner as the accusations flew on the message boards and Twitter. As usual, there was literally no amount of scheming and evil too outlandish to consider in this rivalry. Duke-UNC may be free of the violence and stupidity you sometimes see in the SEC, but in terms of weirdos going all Beautiful Mind on the motivations of the hated other, nothing compares.

Whether this particular paranoia had any basis in reality (nope), the snow delay added another level of intensity to a game that, frankly, doesn’t need more intensity. Multiple reporters at yesterday’s game tweeted that it was the loudest they’d ever heard the Dean Dome, and chants of “glad you made it” greeted the Duke players as they took the floor. An atmosphere that was always going to be wild took on a lunatic energy, and the only way for Duke to win was to maintain a double-digit lead deep into the second half. When that didn’t happen, even fools like me knew that Carolina would prevail. Duke is in the midst of an athletic golden age against UNC, with seven wins over the last 10 basketball games and two consecutive football victories, but in that supercharged environment, nothing could save them.

And the anger and passion of the fans last night will swirl into a twister, and the twister will gather energy as it moves away from Chapel Hill, rising higher and spinning faster each day, until it explodes in a sanctioned act of collective insanity in Cameron Indoor Stadium on March 8. And it will build again, and again, and on and on and on …